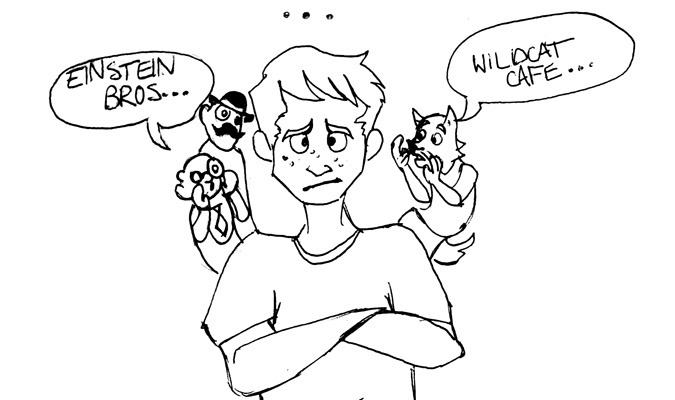 With Baker University’s food future on the line, students have been anxious to learn more about Sodexo, Inc., the potential company that could take over dining services.

Although a forum was held at student senate and the faculty and staff also had a question-and-answer session, there is still confusion surrounding the details of Sodexo and the effects a contract would make at Baker.

One possibility is that if Sodexo gets a contract with Baker, the Wildcat Café will close and an Einstein Bros Bagels will replace it.

Another possibility surrounding the potential contract is a reduction in the jobs of students who work in the dining services department.

Students keep questioning Sodexo, which is what the university, students faculty and staff alike, needs to do.

During the student senate session, students expressed concerns about jobs, food options and costs, and Sodexo was unable to give definite answers to most questions. This left many students feeling uneasy about the possible transition.

At the faculty question-and-answer session, Sodexo representatives seemed confident in the answers they provided, which is the opposite of the student senate forum.

So which information should BU trust?

Before jumping to conclusions about this dining service possibility, students should identify what about dining services is important to them and seek out true, definite answers from the administration and Sodexo.

Here are some things to think about when making a decision for yourself:

• How will costs of meal plans be affected?

• Will the Wildcat Café continue to operate? If not, what will replace it, and will it have student-friendly prices?

• How much of the students’ input will be taken into consideration by the company?

• Can the company cater to the needs and requests of a small school like Baker?

These are just some of many questions the students, faculty and staff on campus should take into account when trying to decide if contracting with Sodexo is the right choice for Baker University.

Until there is a definite decision from the University, the community should think not only about what changes Sodexo would make in dining services, but how the school will benefit, or not, from a contract with Sodexo.