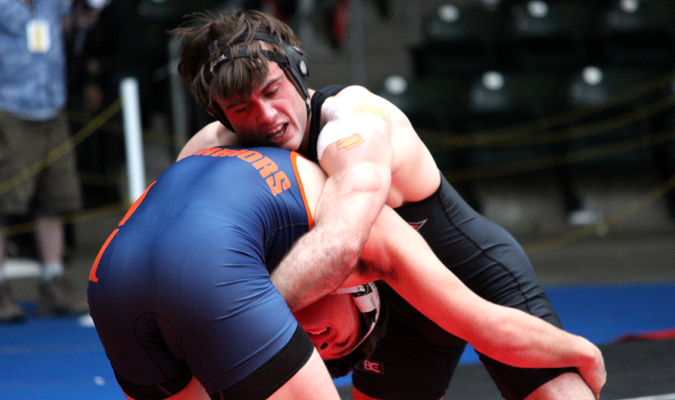 In the final collegiate tournament of their careers, seniors Brandon Gebhardt and Parker Owen finished among the country’s elite wrestlers.

The pair worked their way through their respective brackets in the NAIA Wrestling National Championships Friday and Saturday in Des Moines, Iowa, and earned All-America honors for their performances.

For the second straight season, Gebhardt earned a spot in the heavyweight championship match against Grand View University’s Eric Thompson. Thompson bested Gebhardt in the 2012 championships, but the pair went 1-1 in their next two meetings.

Thompson defended his title Saturday, though, after pinning Gebhardt in the first period.

Owen earned All-America honors for the first time on his way to a sixth-place finish in the 174-pound weight class.

After earning a bye in the opening round, Owen dropped his first match by a 5-3 decision. However, he won four straight matches to put him back in position to become an All-America.

Five other Wildcats also competed in the national championships to help Baker finish 15th as a team.

Senior Alan Callahan dropped his first two matches in the 125-pound weight class by a 6-2 decision and by pin at the 5:46 mark.

Sophomore Nick Haugen won his first match in the 149-pound bracket by a 13-5 major decision, but lost his next match to Jimmy Eggemeyer of Southern Oregon University. Haugen would stay alive on the other side of the bracket, though, by pinning his third opponent within 1:42 and winning his next match by a 5-2 decision. Dakota Wesleyan University’s Dusty Paulsen would then end Haugen’s season by a 7-5 decision.

Senior Nathan Sommer, 165 pounds, dropped his first match 13-3, but defeated his next opponent by a 7-5 decision to continue on. Gian Traverso of Missouri Valley College would advance past Sommer during his next match by a 5-3 win.

Senior Jarid Price won his opening round of the tournament by a 5-4 decision in the 184-pound weight class. However, he fell in his next two matches, ending his chances of becoming a two-time All-American.