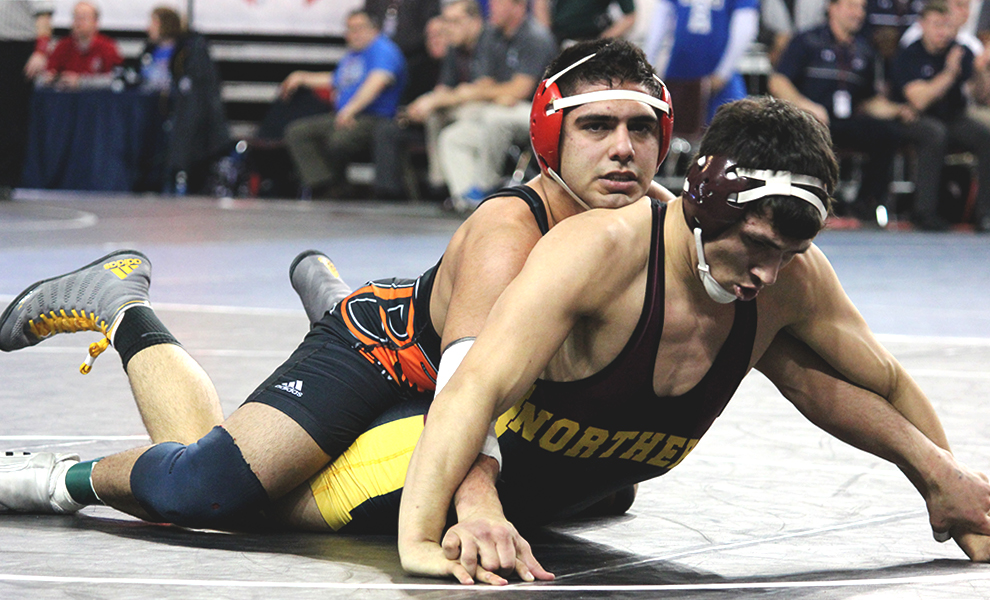 Five Baker wrestlers competed at the 58th Annual NAIA Wrestling National Championships inside the Kansas Expocentre in Topeka. Three of the five walked away with NAIA All-American honors.

For freshman Mike Andreano, it was his first time appearing at nationals. He did well, as many of the younger wrestlers did, and ended the tournament in eighth place in the 125-pound class, impressing his older teammates.

“What surprised me the most was how well and hard our young guys wrestled,” senior Nick Haugen said.

On his way to All-American status, Andreano was able to upset the ninth and 12th-ranked wrestlers in the 125-pound class.

Haugen was also able to step onto the All-American podium, the second time in his career, with an eighth-place finish in the 157-pound class. He finished eighth as well in 2014 in the 149-pound class.

“It feels great to be a two-time All-American,” Haugen said. “It’s good to know that you have been consistently one of the best in the country.”

Sophomore Bryant Guillen finished sixth in the 174-pound class, marking the highest finish for any Baker wrestler this year. This was the first time Guillen finished with All-American status in his career.

Also competing for the Wildcats was freshman Juan Rivera. Rivera lost his first two matches in the 141-pound class by decision.

Haugen had high expectations for the Wildcats this season but was pleased with the team’s efforts in Topeka this past weekend.

“I don’t think you should feel satisfied unless your team wins it all,” Haugen said. “With that said, all our guys showed up and wrestled really tough, so I’m proud of the team.”

The Wildcats will start their offseason training soon in preparation for next year.

“I think the team will be better next year. We are only losing myself and Beau Bennett in the starting lineup,” Haugen said. “Beau (Bennett) will be too hard to replace but the team is young and they got some great experience this year.”