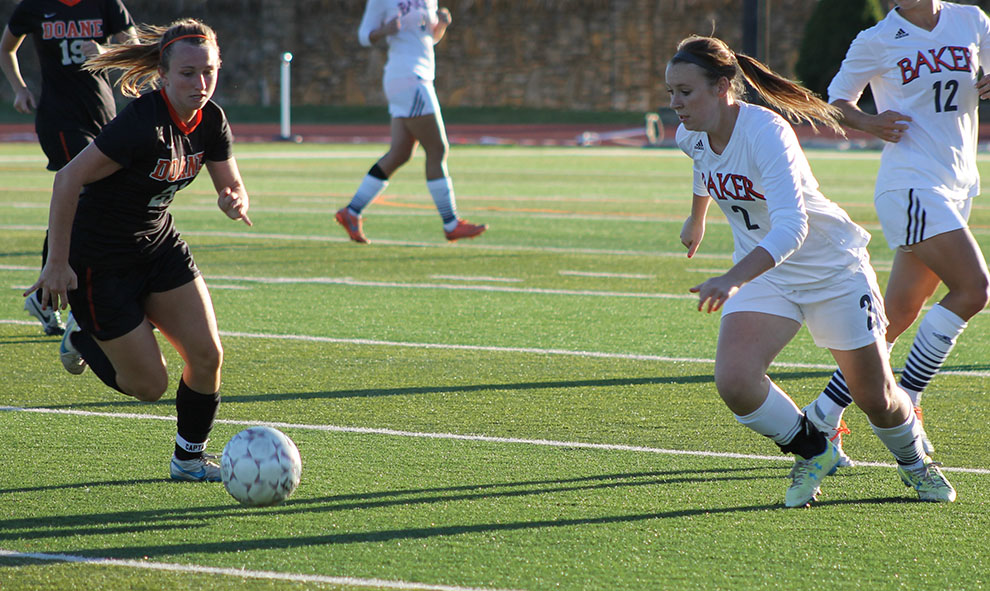 The women’s soccer team improved to 5-1-0 on the season after winning its first home game Friday night 4-0 against Doane College. The Wildcats have scored 24 goals in only 6 games.

“I feel very strongly about our offensive play. We’re scoring a lot goals and they are coming from a bunch of different people,” junior midfielder Keeley Atkin said. “We have players that create chances and players to finish the job. Our midfield to forward combinations still have a little work, but we’re getting there and getting better everyday with those.”

The Wildcats put up an impressive 27 shots on goal on Friday. Sophomore Megan Johnson led the charge with nine shots and two goals. Freshman Kady Dieringer was the only other player to score a goal. The final goal came on an own goal from Doane.

“Megan Johnson is strong up in our offence and allows us to be dangerous going forward,” senior Jenna Carducci said. “Katie Hibbeler is fast on the left side with good technique getting us opportunities for goals. Oaklee Jones has stepped up as a freshman to give us a strong defensive and dependable back line.”

Baker’s defense was as strong as the attack by not allowing a goal in the game. The Wildcats have only given up five goals in six games. This win marks the third shutout of the season.

“I think our defense did an incredible job only allowing three shots on goal in an entire game,” Carducci said. “Doane had some talented players who would have been dangerous to have allowed close to our net, and our defense did a good job of shutting them down and preventing that from happening.”

Ten of Bakers 11 regular season games remaining will be against Heart of America Athletic Conference teams. The Wildcats hope to continue this hot streak into the bulk of their season. Their revamped offense will likely be a key to future success.

“I love our offensive play,” Carducci said. “I think Coach Phillips’ style of play has not only made us better individually, but we have incorporated it so well into our games that teams we have played in previous years, are so surprised with our new offense that they are unsure of how to defend our team.”

Atkin said that the key to carry this momentum forward into conference play is “consistency and confidence.”

“We have to be at our best at all times, we only move forward, no steps back in our level of play, and to do that we have to play with confidence,” Atkin said.

Rachel Hunt played 80 minutes between the pipes Friday night. Sophomore Sarah Fritz came in for the last 10 minutes of the game to seal the victory.

The Wildcats have their goals set high.

“As a team, we are looking to move forward into conference play ready to fight to accomplish our goals, which is a national championship,” Atkin said.

Baker will face Hastings College next at 3:30 p.m. on Tuesday in Hastings Nebraska.