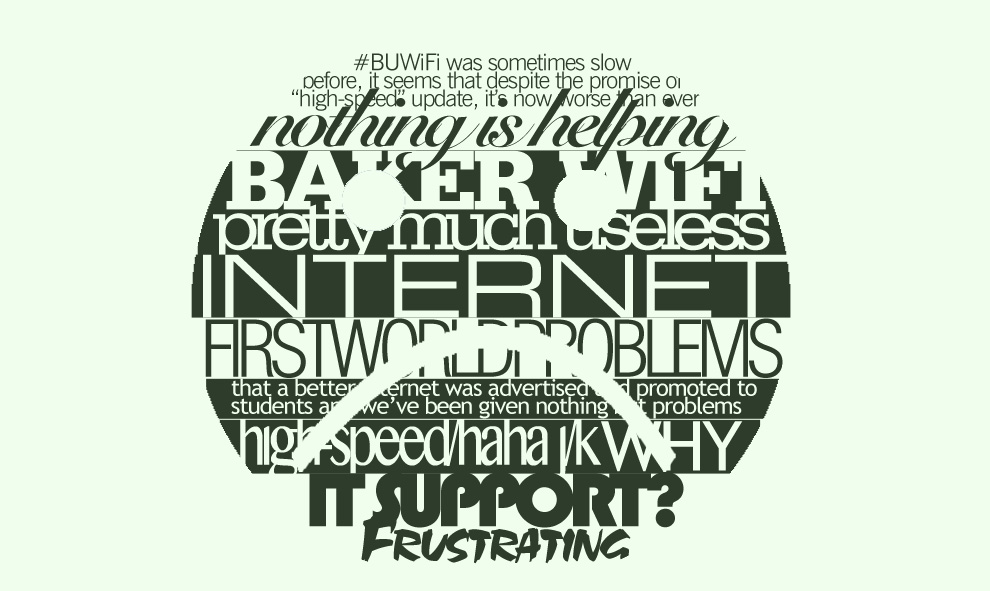 Although #BUWiFi was sometimes slow before, it seems that despite the promise of a high-speed update, it’s now worse than ever.

More often than ever before, students must go to the library for a decent wifi connection, and even then things can get spotty. It isn’t that we don’t enjoy utilizing the resources provided by having a library’s resources available 24/7; in fact, it’s the exact opposite.

Because so many students have no other choice than to turn to Collins Library, the poor wifi just can’t keep up. The more devices, the slower the signal.

In addition to the finicky connection and slow speed, having to go to the library on a late night is not only inconvenient and a hassle, but it can also be distracting for some students. With hoards of people vying for an internet connection, the library can get crowded and with crowds come noise.

It doesn’t help that internet is a large part of academic life and success at Baker. Campus-wide programs and educational tools are widely used by professors, and those programs require internet. With Moodle being a crucial part of Baker’s curriculum, it is vital for students to have consistent internet access.

It can be frustrating and difficult for students trying to complete online assignments, most of which are due by a set time, when the internet cuts in and out or is not available at all.

Although students have put in many technical reports, it seems that nothing is helping. Not to say that the IT department is to blame, because they have been trying their best to fix the problem. The problem is, however, that a better internet was advertised and promoted to students and we’ve been given nothing but problems.

The only hope we see is that the campus connection to the new RG Fiber internet is still in its early stages and could have a few bugs. With any luck, administrators have heard the hordes of complaints from students across campus and will come to the rescue soon. Until then, we suggest you pack your backpack with snacks, a drink and your homework and get cozy over at Collins Library, because it’s going to be slow buffering.