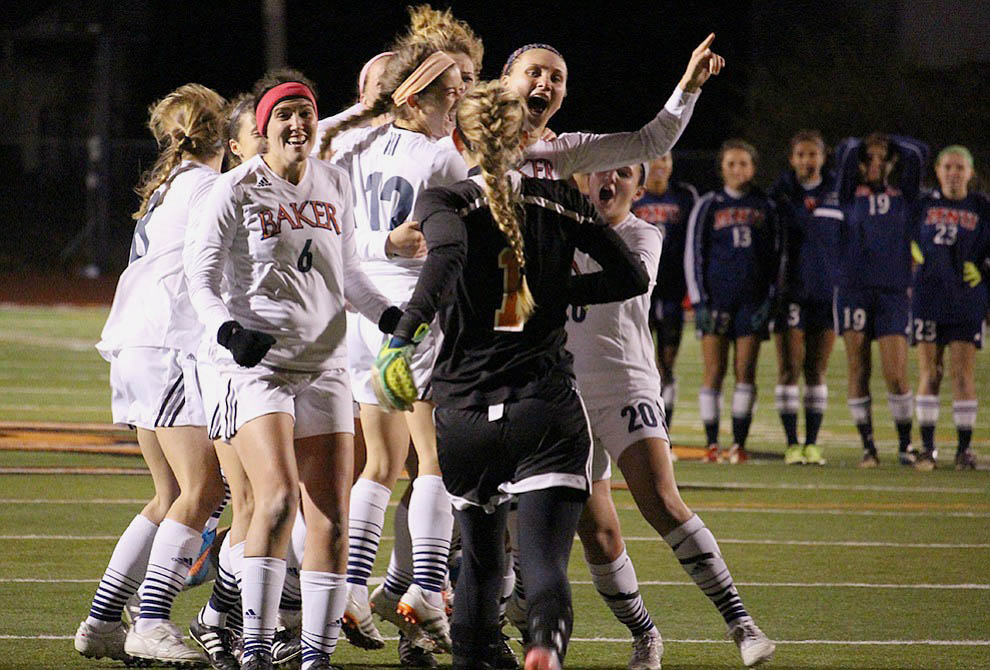 On a cold Wednesday night with wind gusts approaching 40 miles per hour, the No. 11 women’s soccer team defeated MidAmerica Nazarene 4-2 in penalties to advance to the Heart of America Athletic Conference title game.

The rivalry between Baker and MNU has favored Baker in the last three meetings, with Baker winning in 2014 and in both matches this season.

The win over MNU pushes the Wildcats into the Heart championship game with the Benedictine College Ravens, the No. 7 team in the NAIA, on Saturday at 7 p.m. in Atchison.

The game ended in a 1-1 tie after regulation and two 10-minute overtimes. With the wind chill below freezing this was not the best time for Baker to be on the field for nearly three hours.Fans in the crowd donned gloves, jackets, scarves and blankets.

Baker played with the wind at its back for the first half and the stat line showed it. Baker put up 10 shots, and MNU didn’t fire a single shot.

Baker found its break in the 40th minute when junior Heart Defensive Player of the Year Krista Hooper found the back of the net to give Baker the 1-0 lead. Hooper’s ninth goal of the season might be Baker’s biggest goal thus far.

In the second half MNU Pioneers changed their style of play with the wind at their backs. The Pioneers controlled much more of the possession than they did in the first half and were able to get shots off.

In the 86th minute MNU finally tied the game at 1-1. The Pioneers’ Kalyn Plaff sent the game into overtime with the momentum in MNU’s favor on a questionable call in the box. First team All-Heart goalkeeper Rachel Hunt was knocked down on the play with no foul called.

The game then went into overtime, and after neither team scored in the 20 minutes of free soccer, the teams went to penalties.

Second team All-Heart junior Katie Hibbeler drilled the first penalty and then Hunt made a great save, forcing the ball wide right. Then sophomore Kady Dieringer hit the crossbar but luck was not in her favor as the ball failed to cross the goal line. But once again Hunt made another great read and made her second save of the penalties.

Then second team All-Heart junior Keeley Atkin buried her penalty in the left side of the goal. MNU finally bested Hunt and after three penalties Baker led 2-1. First team All-Heart junior Jessica Hillebert put the pressure on MNU with a make in the fourth penalty but MNU responded with its second make. That’s when Baum stepped up with a chance to win.

The Baker crowd made its move to the track near the west goal at the beginning of the penalties. As soon as the ball left Baum’s foot, the Baker students rushed the field and met the team for a celebration.

The Baker women now have their eyes set on the Heart championship at Benedictine, the reigning Heart champs. A win for the Wildcats gives them an automatic bid to nationals, while a loss puts them behind the eight ball for an at-large bid.