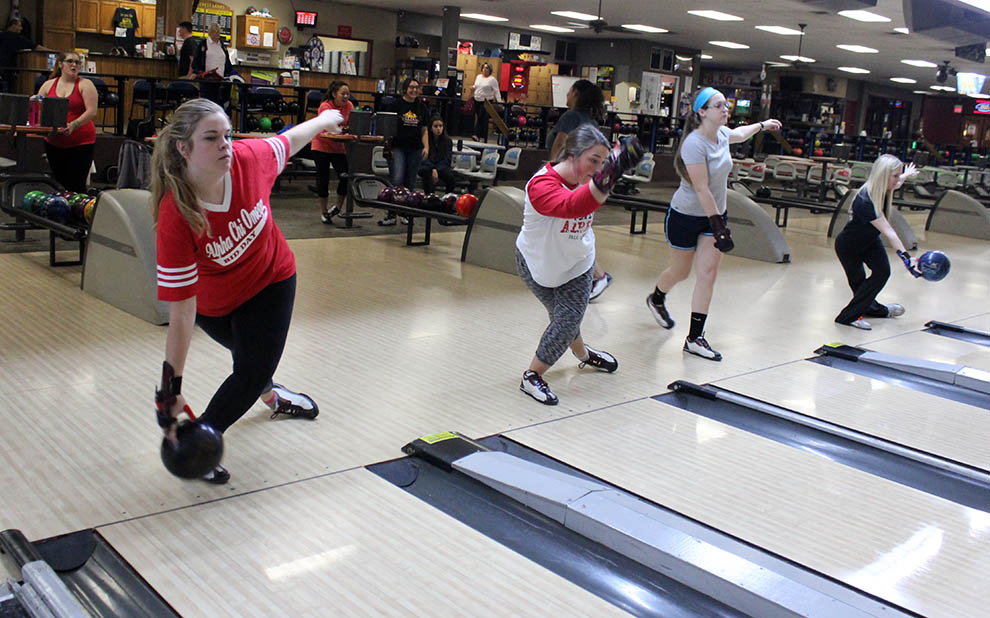 “The team is actually looking pretty good this year,” sophomore Brett Juhl said. “We started off a little slow, but our last couple of tournaments we have made big improvements.”

The season opened Oct. 3 with the Midwest Collegiate Championship in Wauwatosa, Wisconsin. The Wildcats finished 15th out of 31 teams. Individually, sophomore Mackenzie Mitchell finished at a team best 13th out of 225 bowlers.

Baker is a much more experienced team this year compared to last year’s team that consisted of 11 freshmen.

“Our team consists of 9 returners and 2 freshmen,” Juhl said. “We have a great group of individuals who practice hard and love the sport.”

Baker was able to enjoy its home tournament at Royal Crest Lanes in Lawrence on Nov. 7 with a win in the match-play portion. Baker defeated Wichita State in the first round of match play 257-206.

The Wildcats then competed in the 15th Annual Leatherneck Classic on Nov. 14 in Davenport, Iowa. Baker took home a seventh place finish out of 23 teams.

“When we go to tournaments, we always strive to make the finals,” Juhl said. “Sometimes there’s 30 teams and sometimes there’s only 15 but we always try our hardest to make finals whether finals is top eight or top four.”

In the Davenport tournament, Mitchell bowled a near-perfect game with a tournament-high 290. She took sixth place overall. Three other Baker bowlers finished in the top 100 at the tournament as well. Herbert finished 22nd, Allyson Ware finished in 49th place, and Juhl took 89th place.

“I believe every person on my team has value. We are not an individual sport,” Ware said. “We work as a team. We win as a team. We lose as a team. It would be impossible to be where we are without all 11 players and two coaches.”

The Wildcats will compete in five different states in the next five months to finish out their season, highlighted by a winter break tournament on Dec. 19 in Las Vegas, Nevada.

“I think Vegas is my favorite tournament of the year because we bowl in great facilities and I love the traveling aspect,” Ware said.

Looking forward, the BU bowlers are working toward qualifying for nationals that take place in Wichita on April 20.

“Our main team goal is to make it to nationals,” Ware said. “The sectional is top 64 teams go to four regions with four teams advancing from each section, making a total of 16 teams to nationals.”