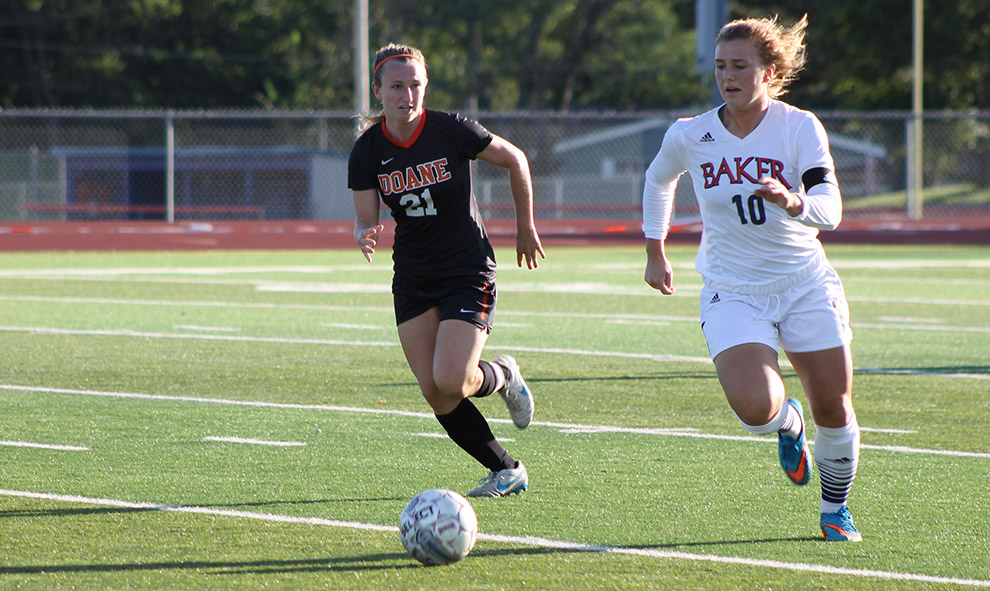 Most parents are able to travel to Baldwin City to see their daughters play at Liston Stadium for home soccer games. However, a couple of parents watch their daughter via a live web stream from the comfort of their home 1,600 miles away in the city of Edmonton in Alberta, Canada.

Junior Krista Hooper, who plays defensive midfielder for the women’s soccer team, grew up in Canada, but after she visited campus and talked to current men’s soccer coach Nate Houser, she knew that Baker University was the next stop for her soccer career.

“I was looking to go D1. I told myself I wasn’t going to go NAIA, and then I talked to Nate when I was in grade 11, so my junior year of high school,” Hooper said. “I visited a few months after that, and as soon as I visited I knew I wanted to come here.”

Her father said that her soccer aspirations began at a young age.

“Krista had her mind set to go away to play soccer at the college level since she was 14,” Brad Hooper said in an email interview. “Once she accomplished it, we supported her 100 percent. As a parent, it was not easy to let her leave, especially at 17 years old, but we knew it was a great opportunity that she worked and sacrificed a lot to accomplish.”

Hooper first started playing soccer when she was 3 years old and first visited the United States when she was 10 for a soccer tournament in Seattle. Hooper’s parents are to thank for her love of soccer.

“I think my parents just put me in it,” Hooper said. “They put me in everything to see what I liked.”

“Soccer has been a huge part of our family’s life for the past 15 years,” her father said. “Krista has had so many great accomplishments as a youth soccer player at the club, provincial and national levels.”

However, Hooper isn’t just dedicated to what she is doing on the field. As a double major in biology and sociology, Hooper does her best to keep herself on track academically.

“It’s hard in-season. I try not to take too many hours,” Hooper said. “I feel like professors forget you’re an athlete and your coaches forget you’re a student, too, and they both expect each thing to be number one and it’s not.”

The biggest challenge for Hooper going into college was her time management. Hooper said it was difficult becoming an adult and making the right decisions. Another change coming from Canada to the United States was not having her family with her.

“Especially when I first moved here, I didn’t have friends or solid relationships here yet,” she said.

One person who helped Hooper get acclimated to college life in the United States was her roommate since her freshman year, Keeley Atkin, who is also a teammate.

“I just thought, ‘Wow, a Canadian.’ I thought she was going to have the biggest accent.” Atkin said.

Hooper said her goals are to be an All-American and win the national championship. One of Hooper’s favorite memories from this season is beating No. 13 Hastings after being down 2-0, when at that time the Baker team was not ranked.

“She wants the best result for the team. She gives it her all at all times,” Atkin said. “She never gives up, like ever. I’ve really never seen her give up.”

Being 1,600 miles away hasn’t prevented her parents from keeping up with her. They are especially thankful for the live stream of games available through Baker’s athletic department.

“We watch every game that is streamed,” her father said. “Our set-up on game day is streaming to our TV, iPad set to look at the stats and iPhone following Baker athletics and Baker Orange on Twitter.”