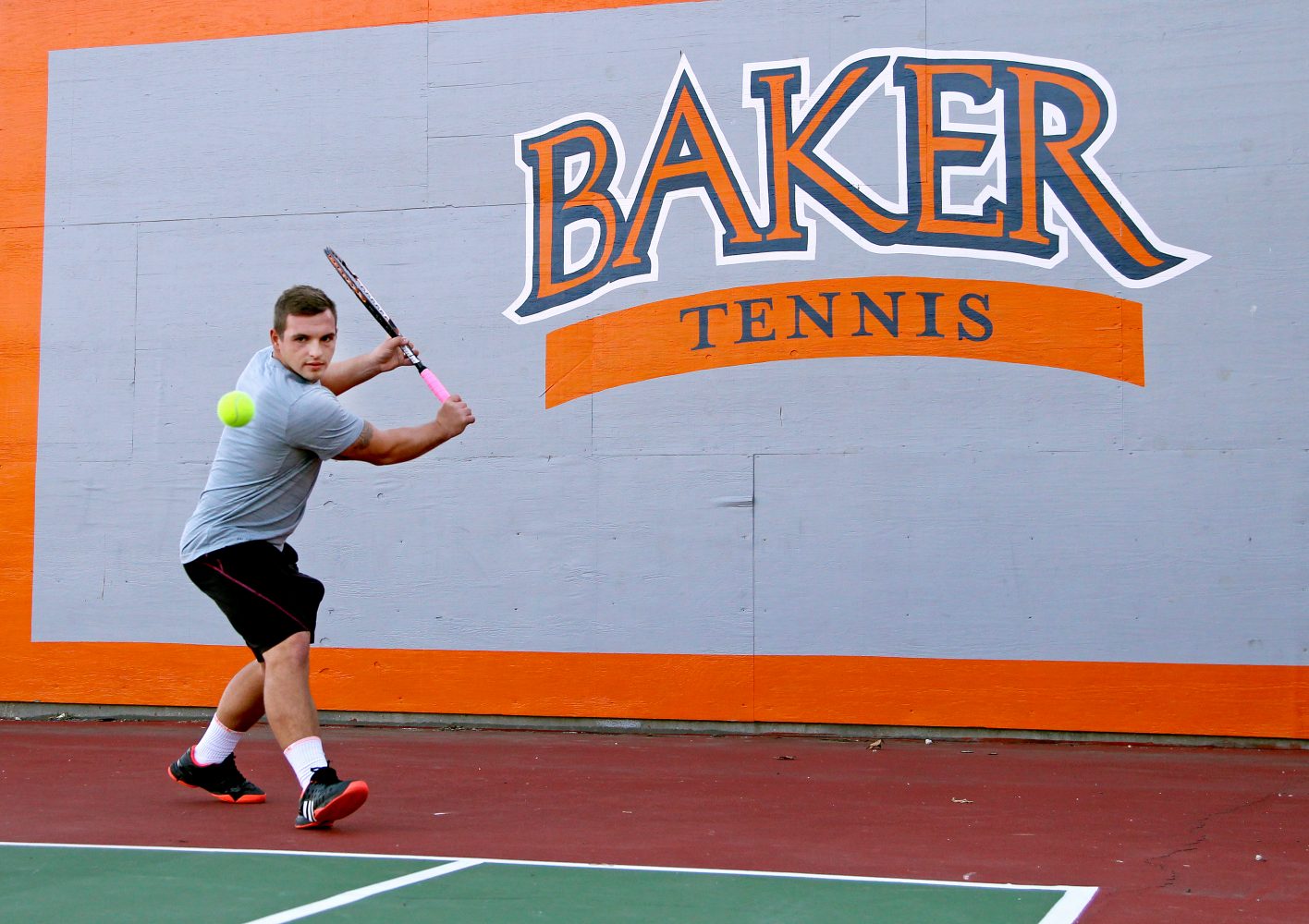 From Minsk, Belarus, to the football field and tennis courts of Baldwin City, senior Spartak Rahachou is no stranger to change. However, this did not stop the dual-sport athlete from becoming the first tennis national qualifier in Baker history last September at the 2015 NAIA Central-South/Southwest Regional Championships in Omaha, Nebraska.

“Spartak is a very experienced, talented and driven player so all I have to do is provide an environment for him to thrive and I know he’ll take advantage of it,” BU tennis coach Joe Ahmadian said.

Rahachou went into the meet ranked second but came out first.

Only eight players throughout the country had the chance to play at the NAIA National Championship. These players gathered in Sumter, South Carolina, Oct. 15-18 for a chance to become NAIA national champion.

Although he entered the tournament with high hopes, Rahachou suffered a first-round loss to Kevin Konfederak of Georgia Gwinnett College, who went on to become the national champion. Rahachou continued in the tournament by winning two more matches to place fifth overall.

“Having an exceptional player like Spartak pushes the rest of us to compete at a higher level,” senior teammate Aaron Greenbaum said.

Rahachou does not remember why he started playing tennis because he started at such a young age. He credits his mother with the start of his 16-year tennis career.

When Rahachou sets down his tennis racket, he picks up a football. He played football in Belarus for two years prior to coming to the United States.

He said he enjoys the team aspect of football the most and having the opportunity to “hit people,” especially considering tennis is a non-contact sport. During the past fall semester, Rahachou was a running back on the junior varsity squad.

Head football coach Mike Grossner describes Rahachou’s support for the football team as “unwavering.” Grossner was able to watch Rahachou play tennis in a tournament at the University of Kansas last spring and “walked away very impressed with his skill level.”

“I was his biggest fan in his quest for the national title this fall,” Grossner said. “It was a true testament to dual-sport athletes as he was playing both sports at the time.”

Rahachou and his doubles partner, sophomore Blake Barnard, came close to making a national appearance. They missed the national qualifying mark by being defeated in the semifinals of the regional meet.

“He’s obviously the better player on the court, I’ll have to admit that one,” Barnard said. “Every aspect of his game is very advanced. He’s had lots of experience at high-level tennis.”

Before coming to Baker, Rahachou attended Johnson County Community College for two years, where he placed third at the NJCAA national tournament.

Although he considered playing tennis professionally, Rahachou admits that the difficulty level was too high and instead decided on coming to Baker.

Junior teammate Austin Keberlein attests to Spartak’s dominance and skill on the court.

“He doesn’t miss, and when you don’t miss it’s tough to lose,” Keberlein said.