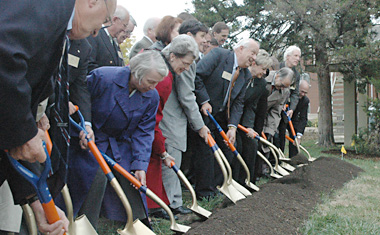 While the agenda of the Baker University Board of Trustees business meeting is typical for the October gathering, BOT members will also get to take part in something that doesn’t happen very often.

Trustee members will be on site of the construction of the new living and learning center at 4 p.m. Friday at Seventh and Dearborn streets.

“We’ll have all the board members there, and it will be a ceremonial groundbreaking when we all get to turn a little piece of dirt,” University President Pat Long said. “It’s a time to show excitement about something new being built, and it will have us looking forward to the next groundbreaking, which will be the science building.”

Those who cannot attend the ceremony and reception will not be left out.

“We’re going to put pictures on the Web site, so there will be a virtual groundbreaking for everyone to share,” Long said.

Before the business meeting, scheduled for 2:45 p.m. in the BOT room, trustee members will hear presentations about successful partnerships at 8:45 a.m. at Collins House and new technological advances at 10:30 a.m. in the Owens Audio-Visual room.

Vice President for Marketing Annette Galluzzi said she would be presenting the board with information about the new Web site.

“Right now we’re working on creating concepts and design work,” she said. “We’re discussing things like content and whether certain pages on the site need to be combined. We’re looking for a way to present the information in a more compelling way.”

Galluzzi said Baker hopes to have the new site running by January.

“We still have the majority of the work a head of us,” she said. “We have a goal to work toward that’s fairly aggressive. At the same time, we’re not going to put out a site that isn’t ready.”

Simon Maxwell, vice president for information technology, will also be giving a presentation to BOT members.

“We’re doing a demonstration for the Board of Trustees on the new BakerView administrative information system,” he said. “We’re going to try to give the board a sense of what this new toolset does for us.”

Maxwell said the program, which went live at the College of Arts and Sciences in March, has experienced a few setbacks.

Long said the business meeting will consist of committee reports, including the approval of the 2008-2009 academic calendar and the financial audit.

The BOT’s work on campus will continue into the weekend, as members will be brainstorming about the future plans for the campus. Students, faculty and staff are welcome to join the BOT for a tailgate luncheon at 12:10 p.m. Saturday under the tent on Mabee Field.