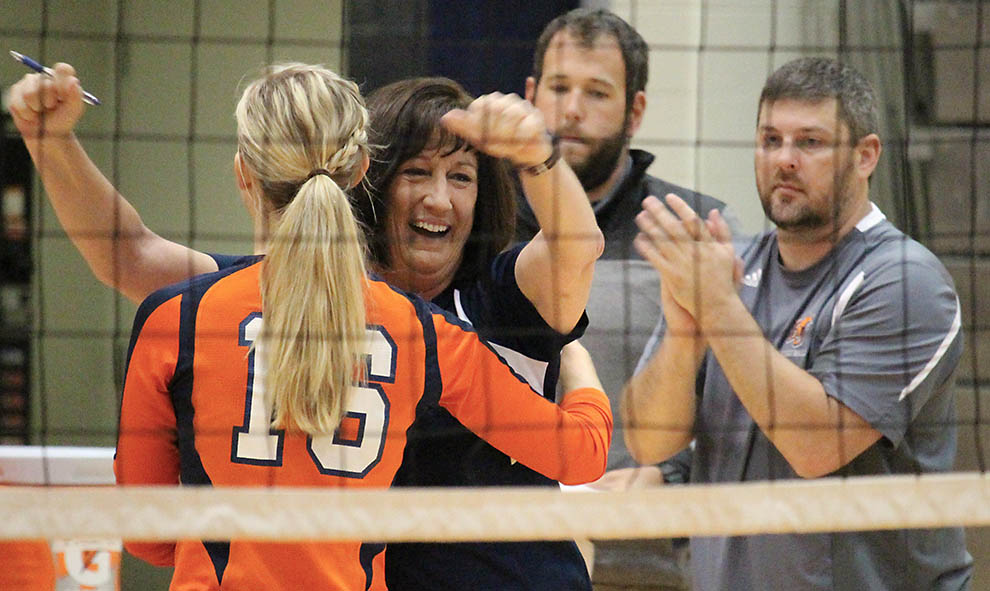 After 18 seasons as the head coach of the Baker volleyball team Kathy Allen has announced her retirement. Allen’s 386 wins makes her Baker’s winningest coach.

“I’ve made a living at something I’d have done for free,” Allen said. “Who gets to do that?”

Allen started her coaching and teaching career at Baker in 1998. Longtime athletic director Dan Harris hired Allen, but getting her to come to Baker was initially not an easy task for Harris.

“Many people don’t realize this but I actually turned the job down the first time Dan Harris offered it to me,” Allen said. “At the time he was fighting to improve funding for women’s sports and all our programs were in the tank. He offered me the job of head volleyball and head softball coach and instructor of P.E. and director of intramurals.“

The offer was appealing, but Allen feared that all of that responsibility was too much to handle so she turned down Harris’ offer. But it wouldn’t be long before Allen ended up becoming a Baker Wildcat.

“Six weeks later Dan Harris called me and offered me volleyball and teaching,” Allen said. “I can’t even remember the salary and I didn’t care. It was my dream job and I jumped on it.”

The Baker Athletic Department has been on the rise ever since, especially with women’s sports.

After 18 years in one place, Allen says that she’ll miss her relationships with her players the most.

“You get to know them so well,” Allen said. “I’ve had hundreds of kids come through my program and each of them has been very special.”

Junior Liz Arnold played for Allen for three seasons and agreed that Allen’s relationships with her players was special.

“She was big into developing her players, not only in volleyball, but in life,” Arnold said.

“She made me a stronger person,” Meader said.

Allen hopes that her coaching and impact will have a lasting impression on her players. She also hopes that her athletes embrace the great opportunities that they had here at Baker.

“Playing college volleyball is something to be proud of,” Allen said. “It’s incredibly hard work and it makes no difference what level. I want my players to brag to their children about their playing days.”

Many coaches will talk about the lessons that they learned while doing their jobs and Allen’s career at Baker was full of life lessons.

“I have learned to be grateful, happy and positive,” Allen said. “I’ve also learned to keep a sense of humor. When your paycheck depends on a bunch of 18-21 year olds, anything can happen and it does. Every day is a new adventure.”

Although Arnold will begin her senior season with a new head coach, she’ll cherish her time playing for Allen.

“Kathy was a great coach who clearly cared about her players,” Arnold said. “There is no doubt she loved the game.”

To begin her retirement Allen plans to travel in her RV for about a year and teach online graduate school classes.

As Allen’s career at Baker has finally come to a close, many people will remember her for her 386 wins, her five All-Americans and a 2011 conference championship. But Allen hopes her legacy will live on for sending the program into the right direction.

“I was hired to turn the program around and teach young people,” Allen said. “I think I’ve done all that.”