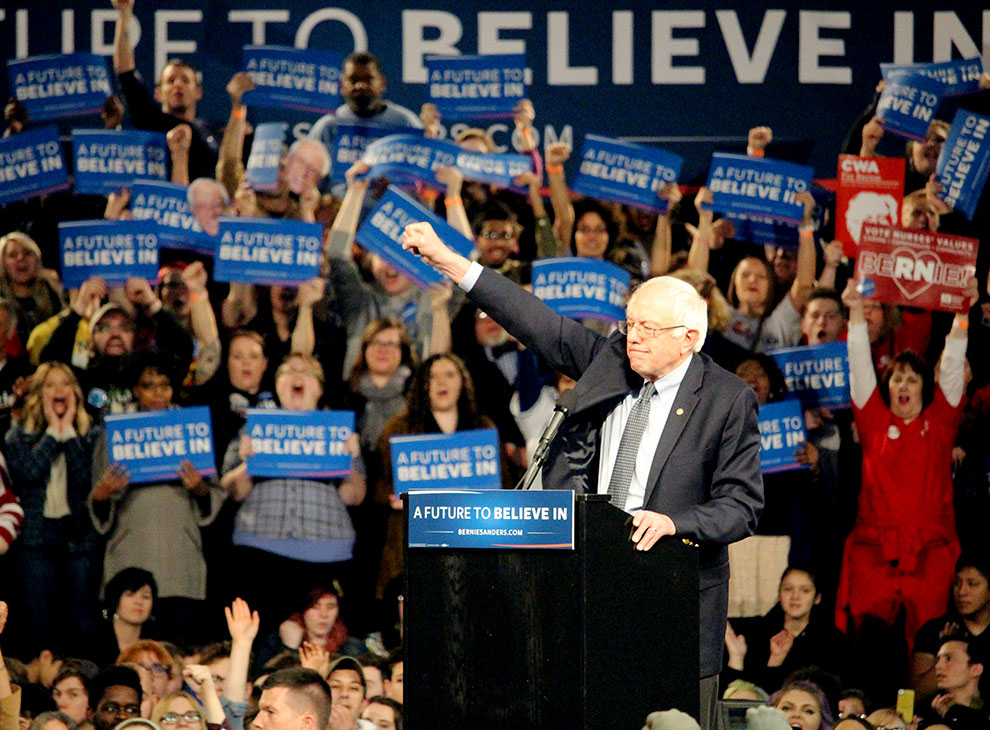 Kansas City “felt the Bern” on Wednesday at the Kansas City Convention Center. Arriving late to his own event, Democratic presidential candidate Bernie Sanders appeared at 1:15 p.m., saying the delay was caused by thousands of supporters still trying to burst through the doors as the rally was beginning.

Of the most interest to college students, one of Sanders’ main proposals was free public college tuition. When Sanders asked those in the crowd if they had any student debt, the question created an uproar. Many people voiced their opinions by yelling and waving their hands.

“In America, people should not be punished for getting a higher education,” Sanders said.

He said he believes that the way to accomplish this is to tax the “Wall Street speculation.”

Sanders then referred to when Wall Street banks started giving mortgages to people that couldn’t pay them back. He said the federal government bailed out the Wall Street banks around 2008, nearly crashing the economy. He thinks that it is the large banks’ time to pay for what they have done.

“Now it is Wall Street’s turn to help out the middle class of America,” Sanders said.

Referring to opponents of his campaign, Sanders argued that he isn’t thinking “too big.” He claims to be planning on standing up for middle class families by providing more jobs through building and fixing infrastructure.

His next point was about how instead of his plans being radical, what is actually radical is income inequality. One of his main viewpoints is that working families shouldn’t be in poverty.

“When working families work longer hours for lower wages and almost of the income wealth goes to the top 1 percent,” Sanders said, “that is radical.”

“I believe health care is a right not a privilege,” Sanders said.

Sanders didn’t just to speak to the college students in the crowd. He also addressed the senior citizens. Taking a stand against Republicans, he said he wants to expand, not cut, Social Security.

He stressed that any president who is elected can’t do it alone.

“What we need are millions of people, all over this country, to stand up and say loudly and clearly, enough is enough,” Sanders said.

Covering topics ranging from police brutality to climate change, Sanders’ points all emphasized one conclusion. His campaign is about “changing America’s priorities.”

“The American people deserve a government which represents all of us, not just wealthy campaign contributors,” Sanders said.

The Kansas caucus is March 5, and the Missouri primary is March 15.