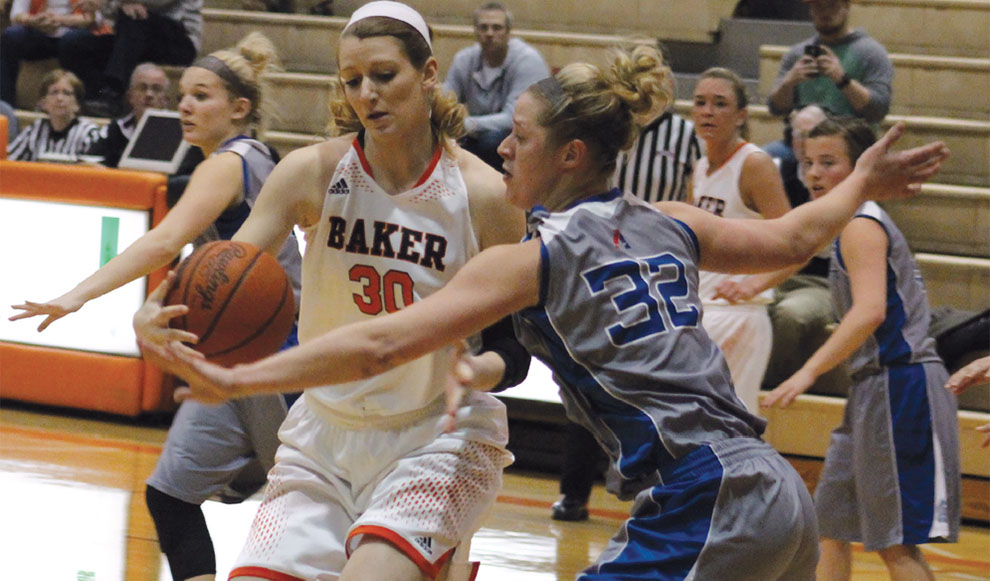 Baker’s defense held Culver-Stockton to 21 percent shooting from the field and only one 3-pointer on seven attempts. Baker’s shooting and rebounding stymied Culver-Stockton from getting within striking distance in the second half.

Culver made the long trip to Baldwin City on Wednesday afternoon, as opposed to driving the whole trip on Thursday with restless legs. Culver practiced in the Collins Center on Wednesday night.

In the first quarter, Baker jumped out to a 13-2 lead, propelled by second-team All-Heart seniors Ericka Simpson and Jami Hodge. But turnovers allowed for Culver to get back into the game. CSC went on a 9-0 run in the final minutes of the first quarter, and Baker led 16-11.

In the second quarter Baker received help from every player on the floor. Three-time Heart Defensive Player of the Year senior Macy Wallisch proved why she was deserving of that honor. Wallisch blocked five shots in the first half and didn’t allow Culver to have any presence inside. Nine BU players scored in the first half with Hodge leading the Wildcats with eight points. At halftime Baker led 29-21.

BU continued to hit shots and all Culver-Stockton could do was try and keep up for the final 10 minutes. Culver’s 37 points were the fewest allowed by Baker in conference play this season. Culver will now have to hope for an at-large bid to the NAIA national tournament.

Culver-Stockton was without its best player, senior Randi Lee Plunkett, who missed the back half of the month of February due to a knee injury and was still named first team All-Heart. Senior TJ Hart had been the next best thing to Plunkett after her injury. Hart was averaging 13 points, five rebounds and four assists per game in the five games that Plunkett missed. Against Baker, Hart scored eight points, all in the first half.

Also on Thursday, the No. 13 Central Methodist Eagles beat Grand View 78-66 in the quarterfinals to set up Saturday’s semifinal game. CMU beat Baker 81-72 in Fayette, Missouri, on Jan. 6. Then on Feb. 10, Baker led CMU in the final minutes in Baldwin City but squandered the lead with turnovers and a lack of rebounding and fell 68-63. Baker and CMU will tip off at 7 p.m. on Saturday