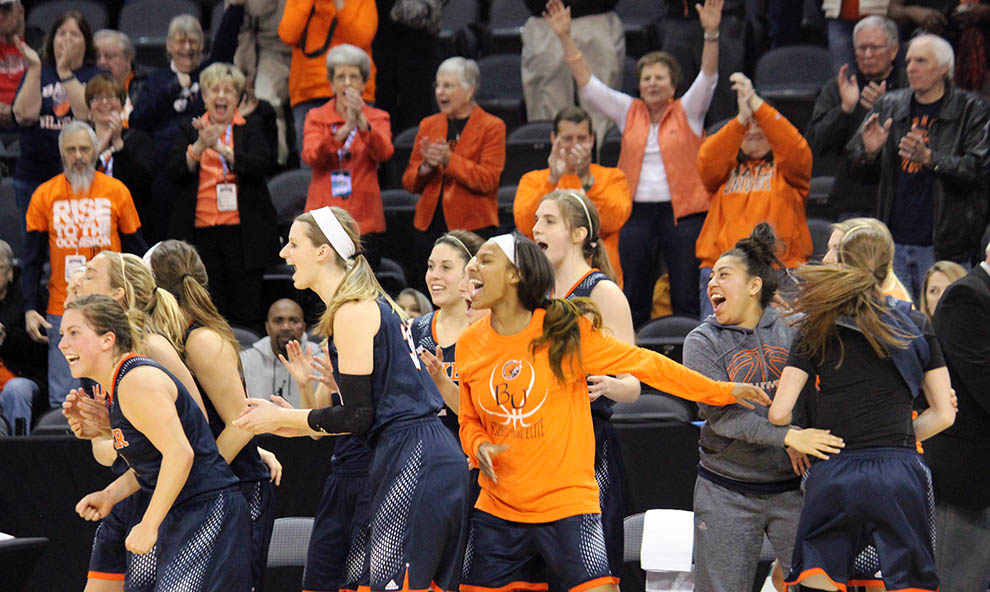 The No. 22 Baker Wildcats claimed a 70-56 win over No. 5 Shawnee State in the second round of the NAIA national championships on Friday afternoon in Independence, Missouri. The Wildcats will play Lewis-Clark State at 4 p.m. Saturday in the Silverstein Eye Centers Arena for a chance to go to the Fab Four.

This was head coach Ben Lister’s 100th win as a Baker Wildcat.

The Wildcats survived the chaos of a wild third quarter and held Shawnee State, the NAIA’s best field-goal shooting team, to 26 percent from the field. They also limited the Bears, who had the NAIA’s second-best scoring offense, to 21 points below their season average.

Sophomore Sydney Buchel was given the task of guarding Shawnee State’s Ali Zieverink, the NAIA’s leading scorer. Zieverink was averaging 23 points per game and hitting 60 percent of her shots. Baker held the All-American to six points on 2-15 from the field.

Buchel’s tough defense forced Zieverink to take three contested looks in the first five minutes, and she missed all three. Hot shooting again put Baker up 11-7 to start the game.

The Wildcats then went through a cold stretch, though, which allowed the Bears to tie the game at 14-14 at the end of the first quarter.

Shawnee State took its first lead with eight minutes to go in the second quarter. The Bears changed their offensive strategy and drove to the basket on every possession to start the second quarter, forcing the Wildcats to foul. Fortunately for Baker, the Bears started 5-11 at the free-throw line.

Senior Macy Wallisch broke the Baker scoring drought with a layup at the 6:40 mark for the second quarter to give the Wildcats a 16-15 lead. Buchel picked up her second foul, and junior Kenzie Cook took over the assignment of guarding Zieverink. Cook picked up right where Buchel left off and forced two misses from the nation’s leading scorer on the first trip down the floor, including a block.

Baker connected on its first 3-pointer with 30 seconds to go before the half as senior Ericka Simpson made the basket as the shot clock expired. The trifecta put Baker up 26-22 at the break.

Baker held Zieverink to 0-7 from the field in the first half and only two points at the free-throw line. The Wildcats did get into foul trouble with Buchel, Wallisch, senior Taylor Chase and sophomore Courtney Hoag all with two fouls.

After halftime the Baker women broke their huddle with a winning look. Simpson was clapping her hands as the Wildcats began the half, and the third quarter wound up being all Baker. The Wildcats outscored the Bears 21-13 and shot 8-17 from the field. Baker jumped out quickly with a 3-pointer from Hodge, who ended the quarter with 20 points after her career-high 30 points on Wednesday.

Then chaos broke out. Hodge was tangled up with Shawnee State’s Abby Feuchter and a jump ball was called. The two ripped at the basketball through the whistle and Feuchter never came up from the ground, suffering an injured arm as Hodge walked away unharmed.

As Hodge walked away, Shawnee State’s Lydia Poe slammed Hodge into the Bears’ bench. Then the benches cleared and coaches and officials were forced to intervene. After a 15-minute review process, Poe and Shawnee State head coach Jeff Nickel received technical fouls as well as Baker’s Buchel. Hodge made three of her four free throws, and Baker led 43-26, the largest lead of the game. At the end of the third quarter Baker led 47-35.

The tone of the fourth quarter remained feisty, but the Wildcats kept their cool after some hard fouls in the first two minutes. Wallisch took a smack to the face but nailed her two free throws. Baker led 53-39 with seven minutes to play.

Zieverink scored her first basket with 6:40 to play after an 0-9 start from the field.

With 2:10 to go Wallisch scored in transition off a perfect pass from Simpson to put Baker up 64-48. Head coach Ben Lister cleared his bench and the Wildcats knew then that they were into the NAIA quarterfinals for the first time in program history.

Hodge led the way again with 22 points on 7-11 shooting. Wallisch played her best game at the national tournament with 18 points and 14 rebounds. Simpson scored 10 points with seven rebounds and four assists. The veterans pushed this team to their third national tournament win in program history.

Baker takes on Lewis-Clark State at 4 p.m. Saturday for a trip to the Fab Four and a potential meeting with conference rival Benedictine.

Benedictine stayed around to watch Baker, and MidAmerica Nazarene players were there to watch as well. In the final moments the Baker fans, MNU and BC all chanted “power conference” together.

The Heart of America Athletic Conference started the tournament at 5-1.