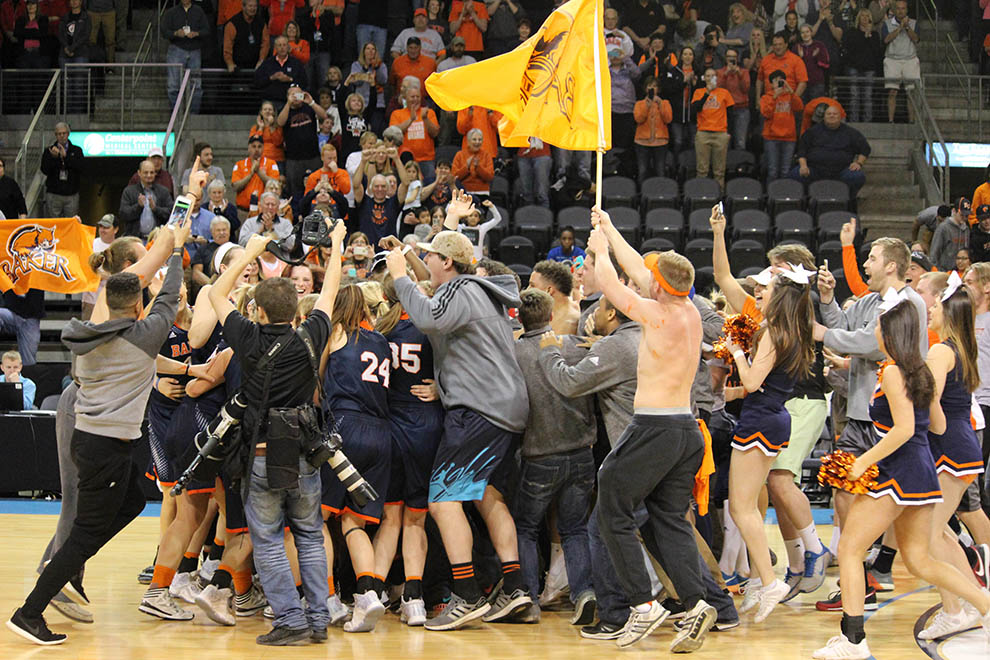 Head coach Ben Lister pumped his arms into the air with 22 seconds remaining in the game. He turned to the student section and screamed as the Wildcats held the basketball for the remaining seconds. His team had just won the biggest game of his coaching career.

“I love what it’s doing for the university,” Lister said. “I love seeing the fans here. Maybe we can have a bigger group tomorrow.”

For the first time in school history, the Wildcats will play for a national title. Baker has broken the school record for wins in a season with 28. Win No. 29 will make the Wildcats the national champions.

Baker will take on the MidAmerica Nazarene Pioneers in the title game after MNU beat Pikeville in the second Fab Four game. Both teams are competing for their first ever national championship in women’s basketball.

Baker held the Ravens to their lowest scoring total since the Wildcats held BC to 41 points on Jan. 9, 2014.

“This is a team that refuses to let up on the defensive end,” Lister said.

The fans for both teams packed buses and vans and were in their seats and screaming before tipoff. The stage was set for the most important women’s basketball game in each school’s history.

Baker and Benedictine split their regular-season series. Baker dominated the Ravens at home with a 65-48 win on Jan. 20 and the Wildcats led by eight points with 1:58 to play but squandered the lead in the final two minutes and lost 51-48 on Feb. 17.

On Monday night, Simpson broke open the high-pressure game with a corner 3-pointer. Senior Jami Hodge then stole a Benedictine pass and took it in for an easy layup. Senior Macy Wallisch scored on a turnaround move in the lane, and a 3-pointer from Hodge forced Benedictine to burn an early timeout. Baker jumped out to an early 12-3 lead.

The Wildcat seniors were responsible for Baker’s first 17 points. The Wildcats starters played the first 8:16 of the game without a sub. Baker led 23-7 at the end of the first quarter and silenced the Benedictine crowd.

The Ravens finally found some rhythm to begin the second quarter and started on an 8-0 run. But BU sophomore Sydney Buchel and Simpson quieted the run with five straight shots to respond. Simpson was in double digits at the 4:00 mark in the second quarter.

Baker’s defense was flat-out dominant in the second quarter. Every Raven shot was contested and the Wildcats had 10 blocked shots in the first half. Wallisch rejected four shots, Buchel blocked four and Hodge got a hand on three in the game. The No. 1 team in the NAIA in blocks continued to dominate and shut down Benedictine’s offense.

At the end of the first half, Baker led 36-15 and had all the momentum. Simpson already had 15 points on 6-8 shooting and 3-4 from beyond the arc. The senior leader nearly outscored Benedictine on her own.

There was not much offense in the third quarter, but that played to Baker’s hand. The Wildcats slowed down the offense and ran off 25 seconds for the majority of their third-quarter possessions.

With 1:33 left in the quarter Hodge drove to the rim and hit the deck hard after being fouled. Hodge would exit with a bleeding chin, and Simpson would shoot her free throws. These were Baker’s first free throws of the game.

Baker led Benedictine 42-21 as the game entered the fourth quarter.

The fourth quarter opened with Benedictine taking deep 3-pointers, which were the only easy shots the Wildcat defense allowed the Ravens to take. Hodge returned to the game at the 7:18 mark to a standing ovation from the Baker fans.

A dominant first half allowed for the Wildcats to cruise into a 50-34 Fab Four victory against a team that had beaten Baker three of the last five meetings. Last year’s rubber game went to Benedictine in the conference semifinals, but the Wildcats found payback this year.

Baker held Benedictine’s Rutledge to zero points for her second consecutive game. The Ravens shot 22 percent from the field and couldn’t recover from a slow start.

The Wildcats will play tomorrow night for a chance at the school’s first team national title. Baker will play at 6:30 p.m.

“We’re looking forward to the test tomorrow, and we’ll see if we can win it all,” Lister said.