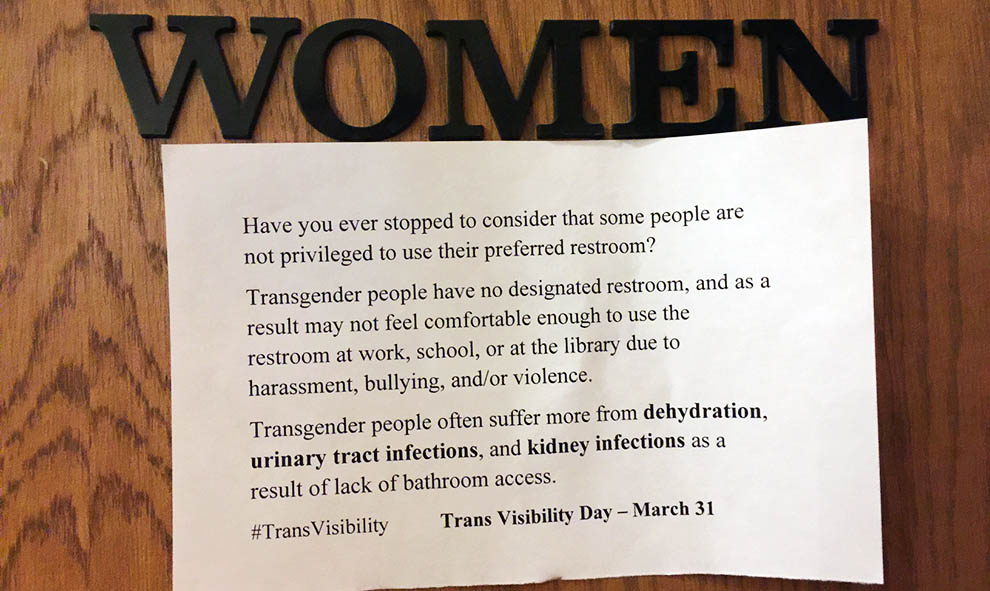 Total Equality Alliance will host a trans-visibility day on Thursday, March 31, to raise awareness for the transgender community.

Throughout the day, members of TEA will be in the Long Student Center passing out gender-neutral name tags.

TEA has asked students and faculty to use only gender-neutral language on March 31 in an attempt to bring awareness and attention to the difficulties surrounding the transgender community.

“One of the things people don’t understand about trans identity is how difficult it is to change the language surrounded by it,” TEA President Brittney Harmon said.

“Pronouns are the biggest issue. When someone doesn’t identify with what they are assigned biologically, usually society goes with the pronoun they think is right,” TEA Faculty Sponsor Nicholaus Pumphrey said. “Often times faculty or family members have a hard time adjusting to that person’s PGP, or preferred gender pronoun.”

The other major issue regarding transgender lives is the bathroom debate. Pumphrey said. In acknowledgment of how gender-oriented our society is, TEA plans to cover up all male and female bathroom signs during the trans-visibility day they .

According to Harmon, the bathroom debate is not based just on equality rights but also on the health of transgender humans.

“Health problems are a huge issue most people don’t correlate with being transgender, which is a big part of why we want to bring awareness to the bathrooms,” Harmon said.

Pumphrey said many transgender people deal with bladder and kidney infections as a result of the fear of being ostracized or punished for using a public restroom.

“It’s one of the systems in our society that you don’t think about unless you are transgender,” Pumphrey said. “As soon as someone jeopardizes that norm, that is when all the shaming and bullying comes out.”

Harmon hopes that discussions about gender will help bring awareness to the transgender community and the issues that they face daily.

“The entire day we will have spent putting ourselves in the position of using gender-neutral language, names, and bathrooms,” Harmon said.