Matthew Hamm makes acoustic debut at the Salt Mine 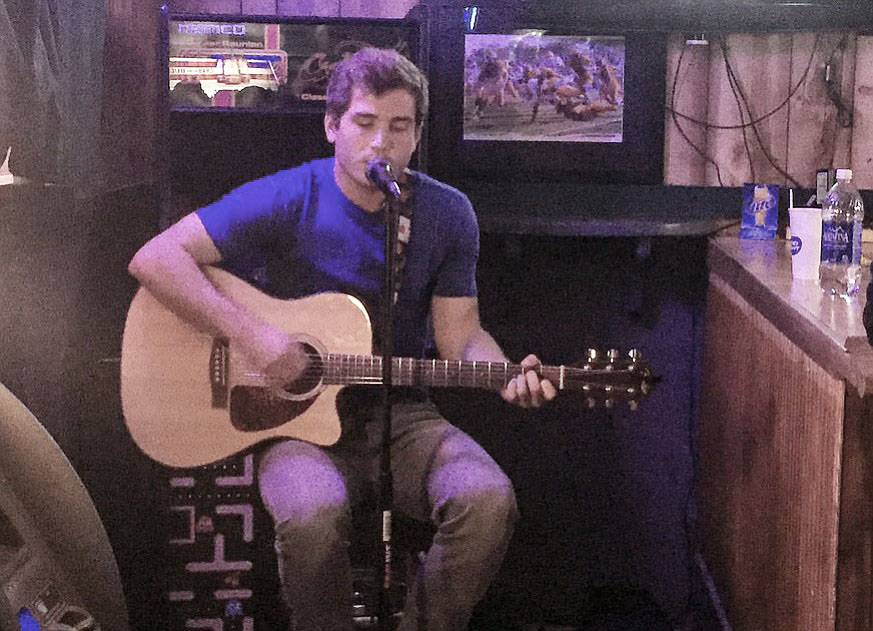 The Salt Mine in Baldwin City had many first-time visitors on Tuesday night, but these guests weren’t there for the drink specials. Performing at the Salt Mine in his first live acoustic set was Baker student-athlete Matthew Hamm.

The Salt Mine allowed entrance for minors for this event, and the audience included many of Hamm’s fellow soccer players. Hamm had heard that friends and teammates would be attending.

“I was a bit nervous going into the performance,” Hamm said. “I’ve played in front of small groups of people, but I’ve never really played an actual gig until now. After I was done, I thought the performance went well.”

Hamm’s set began a little after 9:30 p.m. and included both acoustic covers and originals. Hamm covered a wide variety of artists including Cage the Elephant and Lil Jon and the Eastside Boyz. Hamm finished his set after performing two encores for the crowded room.

Hamm taught himself how to play guitar when he was 16, but he had already started writing lyrics when he was 14. His musical ability came to life in his high school days.

“I started making my own music for a girl I used to date in high school,” Hamm said. “Funny thing is, my first song was about our breakup, though.”

Friend and manager Kyle Young has known about Hamm’s talent for a while and recalls the first time he heard him sing.

“About six years ago, we were out of town at a soccer tournament and all of the team heard him singing in the shower,” Young said.

Hamm hopes his performance at The Salt Mine was just the beginning.

“The next step for me is going to try and play at the Salt Mine again and maybe some other open mics in [Kansas City] and Lawrence,” Hamm said.

Young worked tirelessly hanging up posters throughout campus to promote the show and thinks the show was a great success.

“I would assume now that there are many more Matthew Gil Hamm fans out there,” Young said.