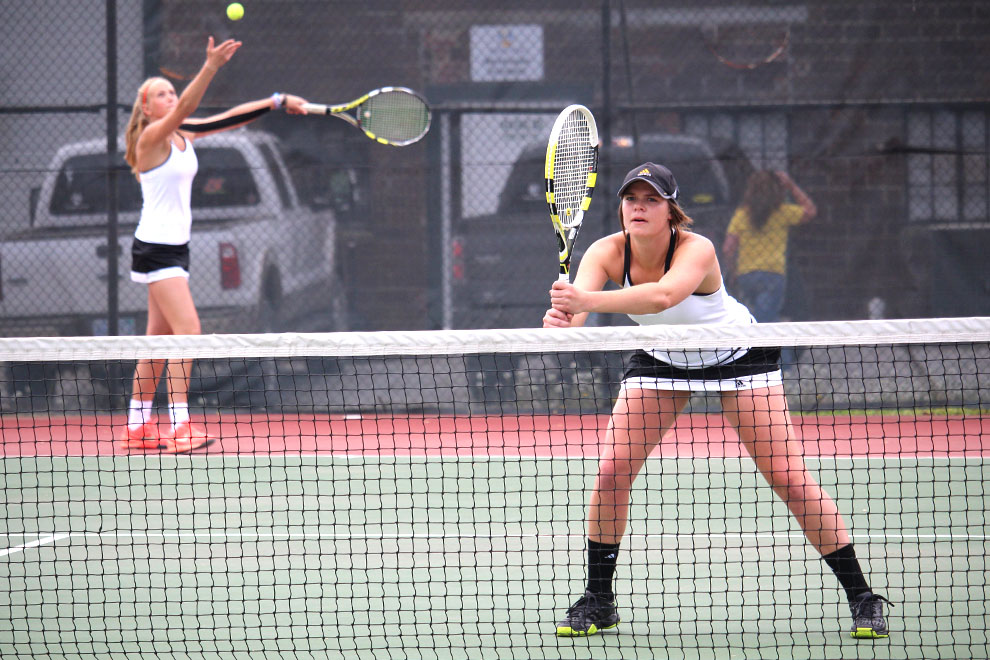 The Baker women’s tennis team split a pair of team matches on Tuesday, April 19, at Laury Tennis Courts. The Wildcats displayed their dominance with an 8-1 win over Stephens College and gained ground on defending Heart of America Athletic Conference champions, Evangel University, but lost 5-1.

Sophomores Amy Wysong and Taylor Swartzendruber earned the lone victory against Evangel in the No. 3 doubles spot with an 8-1 win. Wysong and Swartzendruber surprised themselves by pulling off the upset. They attribute their win to minimal errors and utilizing Evangel’s weaknesses.

“We were more consistent than them and that’s really what helped us win,” Swartzendruber said.

Junior Jaimie Myers and freshman Morgan Francis came close to adding another win in No. 2 doubles but came up short 9-7.

“They [Evangel] are a really good team and we were predicted to lose that match, but we held our own,” said Francis.

The women collected all three wins on the doubles scene against Stephens. Sophomores Brooke Barnard and Holly Chestnut competed at the No. 1 spot to earn an 8-1 win. Myers and Francis once again put on a strong showing that resulted in an 8-1 win. Sophomores Amber Stubbs and Cassie Long also added an 8-1 win as well.

Chestnut, Myers, Francis, Wysong and Stubbs all won their singles matches by significant margins for a final match score of 8-1.

The women will have a short turnaround as they are scheduled to play Bethany College on Wednesday, April 20, at Laury Tennis Courts. The Wildcats are tied at third with Missouri Valley College in the Heart of America Athletic Conference standings. They will play Missouri Valley on April 23 to determine the final seeding for the Heart tournament held in Olathe on April 29-30.