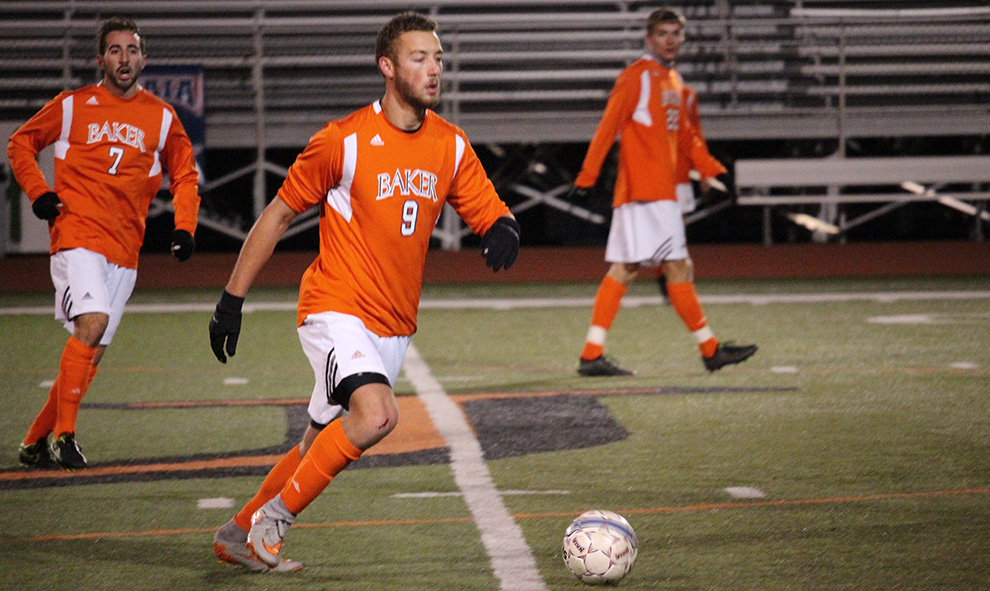 Junior Keaton Anchors pushes the ball up the field in the first half against Wiley College.

2015 proved to be a dominating season for the Baker men’s soccer team, which finished 18-4-1 overall and captured the 2015 Heart championship with a record of 9-1. The Wildcats will be returning at least 10 regulars with championship experience. The squad will see some new opponents this season, including Mount Mercy University, Davenport University and University of Northwestern Ohio. Late in the season the Wildcats will be tested against Missouri Valley College, the team that defeated them in the Heart Championship game.

The biggest part of the returning class will be seen in the midfield. Seniors Keaton Anchors, Matthew Hamm, Jordan Thacker, Spencer Atkin and Julian Sansano all bring speed to the field, crucial in setting the pace of the game. Anchors believes that the biggest strength going into this season is the number of returners who have now played in national tournaments.

“It’s great to have a group of leaders to pave the way for underclassmen,” Anchors said.

The defensive third will see the return of senior Kyle Young, who played in 22 of the 23 games in the 2015 season. The attacking third will see the return of sophomores Austin Halsey and Joe Houlihan, junior Blake Levine and senior Alex Brivik. Levine had eight goals last season, three of which were scored against Evangel in one game. NAIA third team All-American goalkeeper senior Ryan Emme will also return for the Wildcats.

The returning class along with the new recruits will all have big shoes to fill with the departure of defender Amer Didic. Even though Didic played on the defensive third, he ended the 2015 season with 10 goals and honors including 2015 Heart of America Athletic Conference Most Valuable Player and Defensive Player of the Year and being named to the 2015 NAIA first team All-American team. Another defensive departure is Andrew Miller, who played in all 23 games. Two other departures include midfielders Andrew Meinking and Robert Hoeven.

The Wildcats will begin their season at home against Ottawa University at 8:30 p.m. on Saturday. Baker defeated Ottawa 2-0 to open the season last year.

Returners who witnessed the early exit from nationals last year will need to find lasting motivation and work on new team chemistry in order to return to nationals in 2016. Anchors believes this year’s Wildcats are capable of doing better than they ever have. NAIA – Midwest Regional Coach of the Year Nate Houser will return to lead the team. A successful season for men’s soccer would be to follow up last year’s 2015 Heart championship with a repeat along with a berth in the national tournament.