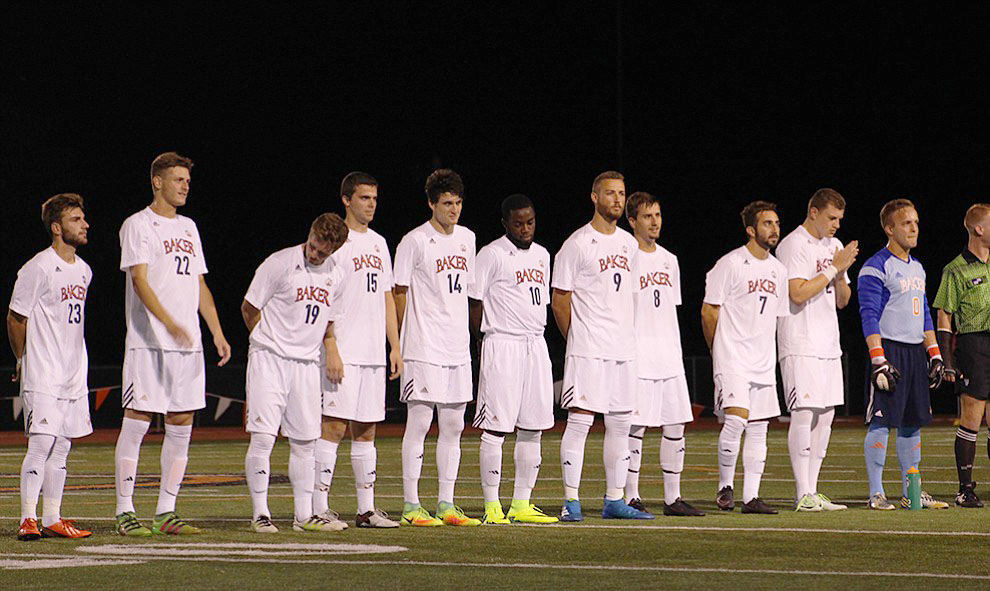 The No. 10 Baker men’s soccer team started its season Saturday with a 4-0 shutout victory over Ottawa University. According to senior Cody Sliva, an opening win against the Braves could spell another breakout season for the Wildcats.

“It’s a good game to gauge where we’re at, and we’ve played Ottawa in the opener two years in a row so we have a similar perspective to where we were at last year.”

The Wildcats would love to duplicate a season like the 18-4-1 performance from 2015, and a dominating performance against Ottawa is a good indicator that the Wildcats haven’t lost a step.

“Getting a comfortable win is helpful considering the tough stretch of games we have coming up,” Sliva said.

The Wildcats made a statement Saturday despite losing three starters from 2015, including top scorer Amer Didic. Still, they were confident in the level of experience the team retained, as well as confident in the newcomers.

“Coach said before the game that basically everybody playing had good experience, and we have eight starters that returned,” Sliva said. “We had one freshman start in Peyton Brown, and he played really well, so there’s nothing to worry about in terms of inexperience.”

It was clear the Wildcats were the superior team defensively as they held the Braves to just one shot on goal for the entire game, and only two shots total.

“We were able to play without any pressure for the most part, so it was an easy game defensively,” Sliva said. “It was also easier because we knew they would be conservative coming into the game.”

BU held a 1-0 lead heading into halftime off of a goal from senior Kyle Young with an assist from the freshman Brown, but went on an offensive roll in the second half, scoring three more goals in the final 36:27.

“They sat back defensively the whole game, but we were more patient in the second looking for spots to score,” Sliva said.

Sophomore Austin Halsey scored the first goal of the second half in the 54th minute, and freshman Carter Yancey followed suit with a goal in the 75th minute. Senior Aidan Kuhls tacked on another off of an assist from senior Jordan Thacker in the 84th minute.

In addition to offensive and defensive dominance by the Wildcats, they also showed more discipline, as Ottawa out-fouled BU by a 14-8 margin. This was a sign to the Wildcats that the Braves would not be able to keep up.

“They would get easily frustrated,” Sliva said. “Our midfielders are pretty quick and they weren’t able to keep up, so they just resorted to fouling.”

The 1-0-0 Wildcats will next take on the Hastings College Broncos, who also won their opener against the University of Science and Arts Oklahoma 3-2 Saturday. The last time the two teams met, the Wildcats won 2-1 in 2015.

“Hastings is always a good game, so if we’re able to get the win in that game it will be a confidence booster.” Sliva said.

The game will take place at 6:30 p.m. Tuesday at Liston Stadium.