Convocation reflects on past and looks to future 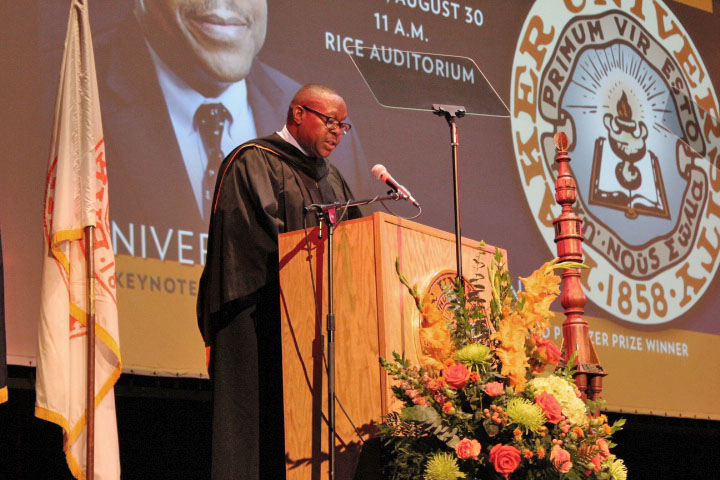 During convocation on Aug. 30 in Rice Auditorium, keynote speaker Harold Jackson reflects on his time at Baker and how he went from the projects in Birmingham, Alabama, during the Civil Rights era to becoming a Pulitzer Prize-winning journalist.

Students, faculty and staff filed into Rice Auditorium on Tuesday for the long-standing Baker tradition of convocation to observe the start of the fall term. Following the theme of “Baker Builds Achievers” this convocation emphasized the past, how Baker is growing and what that growth means for the future.

Slideshow photos featuring both old and new photos of various departments and groups through the years – from the science department to the dance team – were projected onto a screen on the Rice Auditorium stage. Students rose as faculty, staff and members of the Board of Trustees entered the auditorium in their academic regalia, accompanied by the music of the BU Brass Ensemble led by Director of Bands Frank Perez.

Because of his journalistic background and preference for print media, Jackson chose to read his speech on paper instead of using a teleprompter. Jackson reflected on his childhood, growing up poor in the projects of in Birmingham, Alabama, during the height of the Civil Rights era and his journey to becoming a Pulitzer Prize winning journalist.

Commenting on his years at Baker, he said that Mungano was an important part of his Baker experience.

“Baker had only had 10 to 15 black students before my class arrived (in 1971), but that year we had about 50 blacks students. We bonded as members of Mungano, a black student group that had formed the year before, in 1970,” Jackson said. “Its members were involved in every aspect of student life: student government, choir, athletics, theater, the Baker Orange, KNBU radio and intramurals. Most black students didn’t join sororities or fraternities, so Mungano also provided much of our social life. It was our source of support when we felt alienated. It made my four years at Baker a better experience.”

After a quick joke about how lousy Baker’s football team was back then, Jackson acknowledged how influential certain Baker professors were to his personal and academic growth and then moved on to the subject of his career in journalism.

Commenting on the changing world of mass media, Jackson advised prospective journalism students to think about the future of the industry and how they could do their part in keeping the industry afloat.

“I am in no way intimidated by this [shift from traditional media] and neither should any of you students who want to pursue a career in journalism. People still want the news, they still want to know what is happening where they live and the rest of the world, but they don’t want to pay for it – good journalism costs money,” he said. “People smarter than me have been trying to figure out how to solve that conundrum – so I urge you, to subscribe to a newspaper, make a donation to public radio; otherwise, what you know about may not be what you have seen or heard, but based on rumor and propaganda. Imagine where that will take you. Imagine where it will take this nation.”

After Jackson exited the stage, an inspirational video showed a few BU alumni giving advice and welcoming new students to campus. A video featuring he class of 2020 followed, bringing a few laughs and giggles from freshmen in the audience upon seeing themselves and their friends talk about their unique talents on screen.

Later that evening, Jackson concluded his visit by appearing at the Baldwin City Public Library, at one of its Celebrating Centennial events planned for this fall. Jackson was one of three panelists discussing the current relationship between media and politics. The panel discussed the current and future state of mass media in both a general and political light.