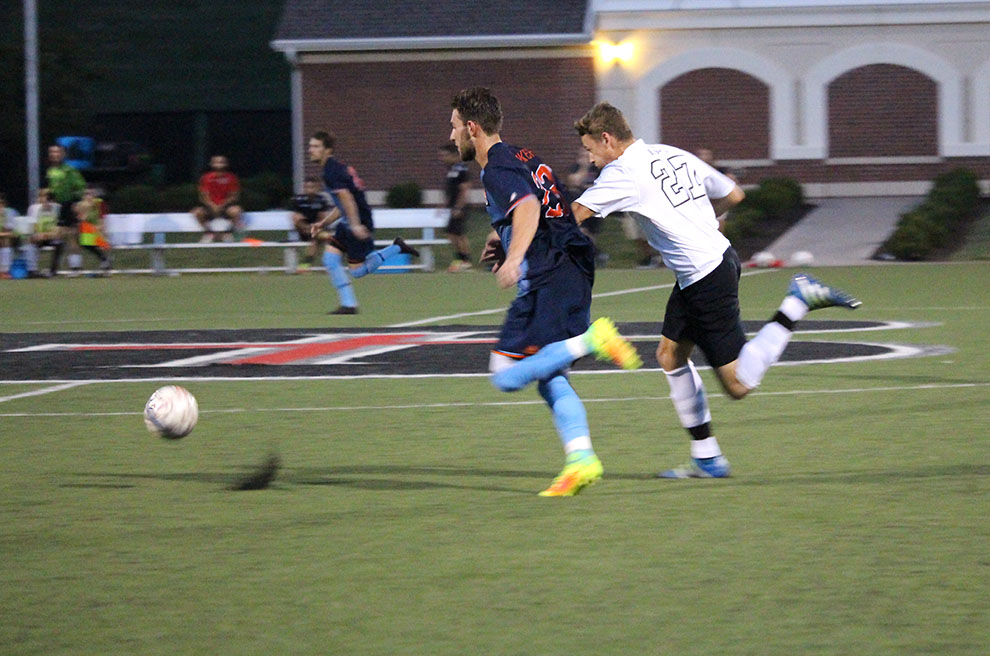 It was a long and thrilling night for the Baker men’s soccer in Atchison on Wednesday night. The Wildcats powered through 103 minutes to pull out a 3-2 victory against the Benedictine Ravens.

The ‘Cats had to battle back after the Ravens’ Levi Spray scored early in the 10th minute. Meanwhile, the Baker offense encountered obstacles as Benedictine goalkeeper Caleb Jenkins recorded six saves in the first half followed by seven saves in the second half.

“Letting in goals is never fun, but it being a rivalry game you always have to get back into it, knowing that the 10 guys in front of me and everybody else on the bench had my back,” Riggle said. “So it was good.”

With the Wildcats trailing 1-0, Baker was able to tie the game. In the 19th minute Gonnie Ben-Tal found the back of the net off a corner kick taken by Peyton Brown.

After the half both the Wildcats and the Ravens showed little backing down. Benedictine was able to answer in the 71st minute on a goal by Ryan Dickerson. Dickerson and Daniel Barry led the Ravens with four shots each.

Baker responded with a goal by senior Blake Levine in the 82nd minute, tying the game 2-2. Levine had three shots for the night, two being on goal. Baker outshot the Ravens 21-13 overall.

The game went into overtime, and then after an inconclusive first 10 minutes, the Wildcats and the Ravens were forced into double overtime. In the 103rd minute of the match, Brown sent in a free kick from 40 yards out that went past the goalkeeper and found the back of the net.

Both the Baker bench and the Baker fans that made the trip erupted while the Benedictine fans fell silent. Riggle said this game was a good game to build upon for the season.

“Especially with the game, fighting back after going down twice and getting the win in overtime, it shows resilience and it will be helpful once we get to postseason.”

Baker is now 2-0 in conference play, 6-2 overall. The Wildcats will continue their conference play against Culver-Stockton on Saturday, Sept. 24, at Liston Stadium.