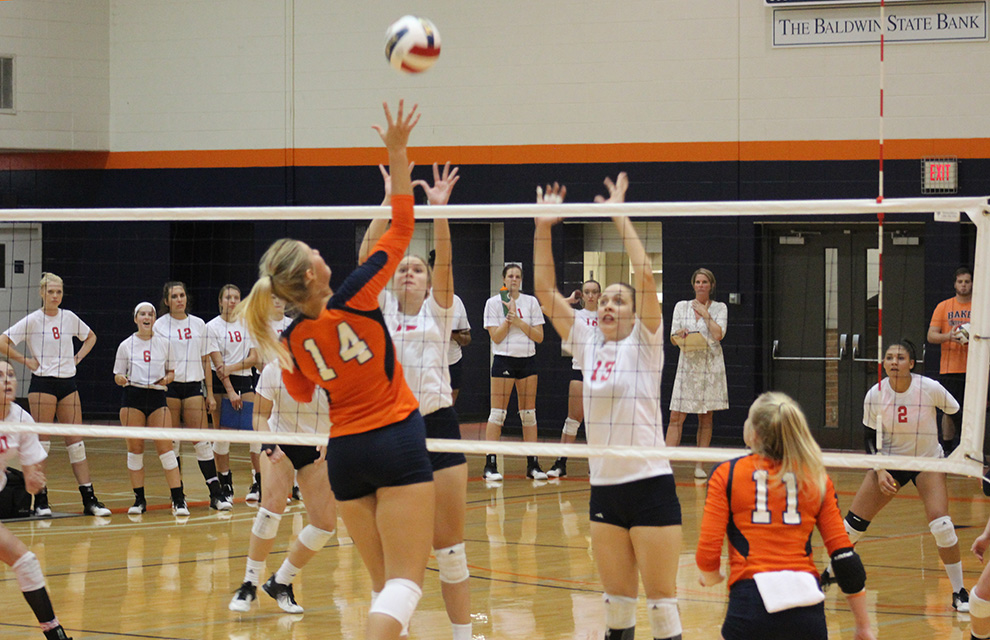 Olivia Brees sends the ball back over the net against MNU on Sept. 27. Brees had five kills in the match. Image by Shelby Stephens.

No. 8 MidAmerica Nazarene University swept the Wildcats in three sets (25-20, 25-13, 25-14) in the Collins Center. This brings Baker to 3-13 on the season. The Wildcats remain winless in the Heart of America Athletic Conference at 0-2.

The Pioneers dominated from the first point, causing Baker to continually play from behind. MNU recorded a total of 50 kills to Baker’s 28. MNU’s Gisele Silva had 17 kills, adding to her season total of 354, which is currently the highest in the NAIA.

Defensively for the ‘Cats, setter Jenna Sackman had 11 digs and Sparks had 10.

Despite the less-than-perfect start to the season, the Wildcats are eager to take on the rest of their conference opponents.

“We’ve had a tough schedule so far, one of the toughest in the NAIA,” junior Madeline McCrary said. “Because of that we’ve learned a lot about ourselves and our team.”

The ‘Cats still have 14 matches remaining in the season, 11 of which are against other Heart teams.

On Saturday the Wildcats will travel to Des Moines, Iowa, to take on conference opponent No. 11 Grand View. The Grand View Vikings are 2-1 in the Heart, 11-4 overall.

“We’re confident that because of a tough schedule in the beginning of our season we will be able to move forward and be successful the rest of the season,” McCrary said.