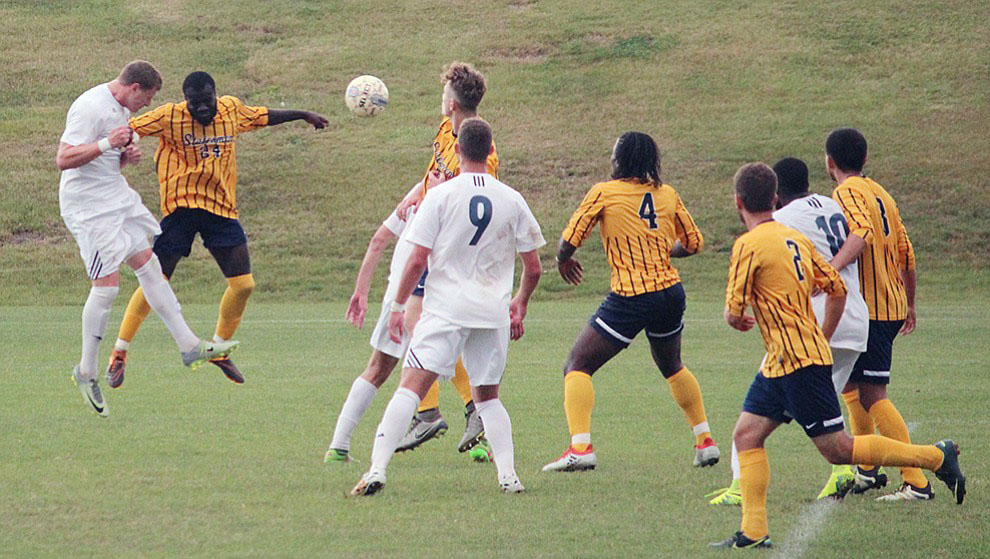 The No. 10 Baker men’s soccer team is now 7-2-2 on the season after tying with William Penn University on Saturday, 1-1.

With a 3-0-2 Heart of America Athletic Conference record, the Wildcats are fourth in the conference standings, behind Grand View University, Central Methodist University and MidAmerica Nazarene University.

Sophomore Steeve Pouna scored in the 15th minute, giving the Wildcats an early 1-0 lead. The Wildcats took the lead into halftime, but then William Penn’s Nenad Markovic knotted the game back up at 1-1 in the 68th minute. Two more shots in the minute following the WPU goal were saved by senior Ryan Emme to keep the Statesmen from taking their first lead of the game. The game remained at 1-1 for the rest of regulation, going into overtime for the second time in the season for BU.

Emme, in just his second game back, played all 110 minutes in the game. After shutting out MidAmerica Nazarene Tuesday, he allowed his first goal of the season but made six saves, four more than in the 3-0 MNU victory.

The Wildcats had a one-man advantage for the final 12:04 of the game, after WPU’s Kollie Jomah was sent off with a red card in the first overtime period. Even with the advantage, the Wildcats only put up two shots in the second overtime, the same amount as the Statesmen. However, both of William Penn’s shots in the period came in the final 30 seconds, neither of them on goal.

The Wildcats will face a tough test Wednesday when they take on second-place Central Methodist. The Eagles are 4-1 in the Heart, 8-2-1 overall. BU will be hosting at 8:30 p.m. at Liston Stadium, where the Wildcats are 4-1-1 at home.