Women’s soccer improves to 7-1-1 in conference 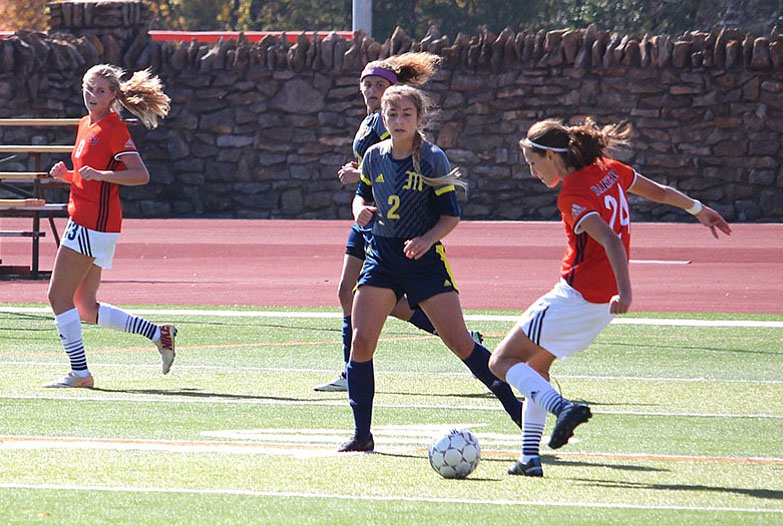 The Baker women's soccer team has scored 14 goals in its last three games, including Sunday's win over Mount Mercy. Image by Bailey Conklin.

The Baker women’s soccer team put on an offensive display Sunday at Liston Stadium, where the Wildcats defeated Mount Mercy 7-0. The Wildcats improve to 7-1-1 in the Heart and 11-3-1 overall.

Baker had six different goal scorers against Mount Mercy. The Wildcats began their scoring campaign early in the third minute with a goal by Megan Johnson.

The next goal came from Krista Hooper assisted by Katie Hibbeler in the 26th minute. This was Hooper’s eighth goal for the season and Hibbeler’s seventh assist.

Baker showed no sign of letting up by scoring again in the 28th minute off a second goal for Megan Johnson followed by a goal in the 36th minute by Amelia Hoelting assisted by Mykaela Hagen.

After the half Baker was up 4-0 against the Mustangs with 11 shots and keeping the Mustangs from taking a single shot.

Jennna Lattimer opened the Wildcats’ second half scoring with a goal in the 55th minute. Lattimer was named this week’s Heart of America Athletic Conference Player of the Week with five goals in her past two games.

In the 66th minute Katie Hibbeler scored on a breakaway goal assisted by Keely Atkin, and Elle Fredrickson finished the Wildcats’ scoring run with a seventh and final goal in the 68th minute.

The Wildcats outshot the Mustangs 19-2. Kady Dieringer and Krista Hooper led the team with three shots each.

For the Mustangs, goalkeeper Jordan Polito had three saves in her 79 minutes played. Mount Mercy fell to 2-6 in Heart play and 7-7 overall.

No. 15 ranked Baker University is now just one spot away from leading the Heart conference.

The team has hit its offensive stride deep into its conference play. Baker has gone on a three-game win streak after tying 1-1 with Central Methodist on Oct. 5.

After defeating Graceland University on the road 1-0, the Wildcats then traveled to Springfield, Missouri, where they defeated Evangel 6-0.

The Wildcats will now travel to Avila University to take on the 1-7 Eagles in Kansas City, Missouri, on Wednesday at 1 p.m.