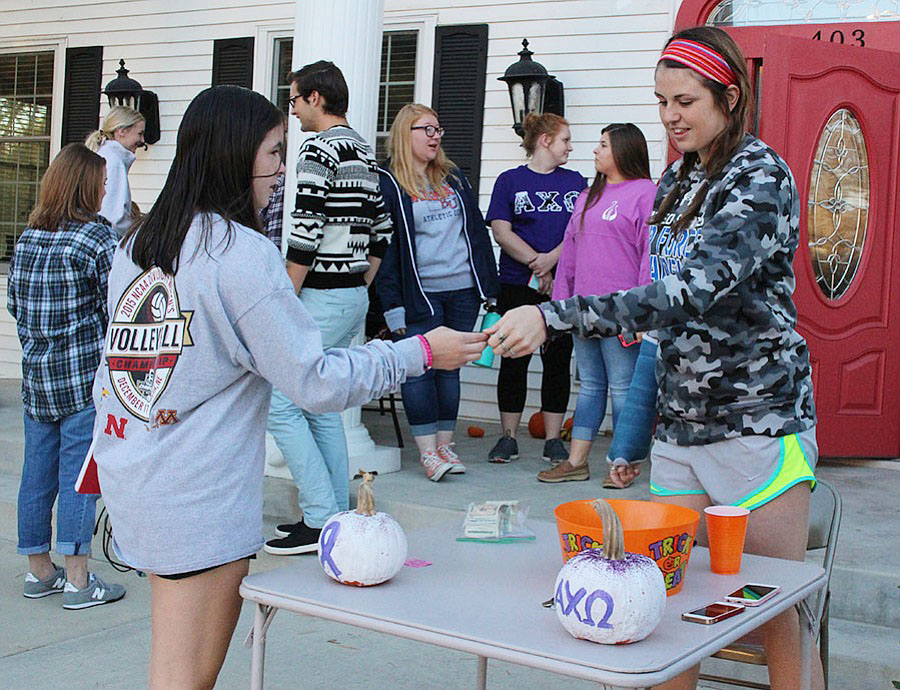 As part of the campaign, the sorority also raises money for the Willow House, an organization in Lawrence dedicated to ending domestic violence and sexual abuse and helping those who are affected.

“I think [domestic violence awareness] is important just because it doesn’t receive a lot of attention, and it’s just one of those taboo topics that no one really likes to talk about that much, but it’s actually really widespread,” Siler said. “One in four college students is domestically abused.”

This years’ events, held during the third week of October, included “Put a Nail in it” fingernail painting on Monday, an ice cream social on Tuesday, a self-defense course for all campus women on Wednesday, and “Let’s Taco ‘Bout It” on Thursday.

Advance publicity for these events is created largely through social media as well as word-of-mouth. All Alpha Chi Omega members participate in these events.

“My role in DVA week is just to go to all the events and help promote them,” sophomore Emily Riggs said.

Riggs added that one of her sorority membership duties is to “be excited to share with Baker, and all of the students here, what domestic violence awareness is and why it’s so important.”

Alpha Chi Omega strives to make the topic less intimidating and to make the events enjoyable for all who participate.

One of the more popular events of the week was the self-defense course. Taught by Alpha Chi Omega alumnae Liz Minson, as well as her brother and her tae-kwon-do teachers, all of the women who attended were taught practical self-defense methods.

For freshman Abigail Hess, the self-defense class was her favorite event of the week.

“It gave me new skills that I could take and use throughout my life to defend myself from harm,” Hess said.

The class featured several self-defense techniques, including how to punch and kick properly and how to get out of potentially dangerous situations.

As part of Domestic Violence Awareness Week, which was also promoted by Student Activities Council. students put up signs around campus displaying statistics regarding sexual assault and domestic violence. For Riggs, learning the statistics behind domestic violence was an important experience.

“When I first started learning about DVA, it was really scary and surprising and eye-opening. It wasn’t what you expect to be,” she said. “It’s much more prominent and common than anyone imagines because it’s not something that talked about in casual conversation.”

Even after October ends, the Alpha Chi Omega sorority chapter will continue to raise awareness for domestic violence through other organized events throughout the school year.