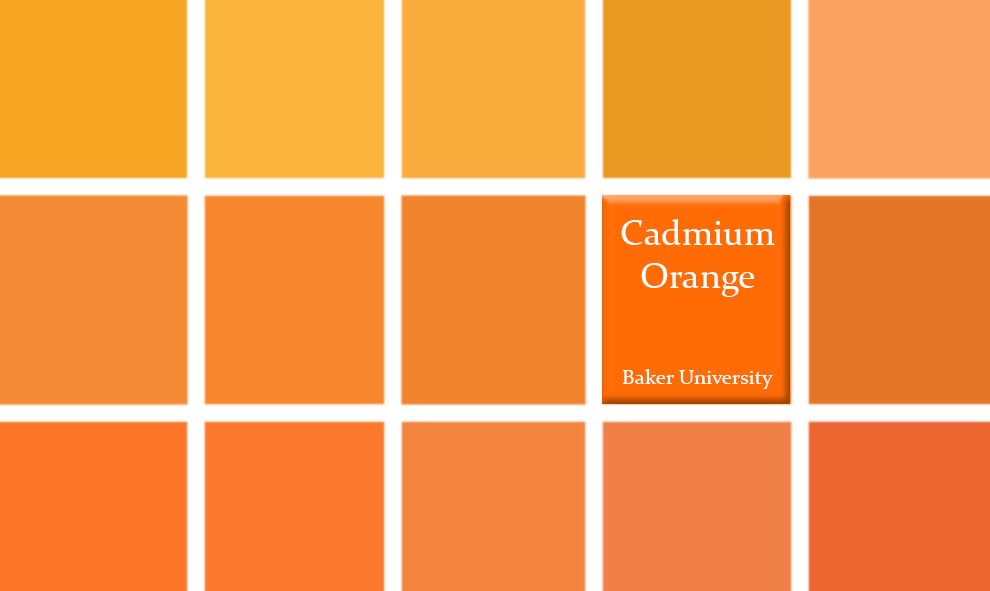 Baker University, one of only two schools in the nation to have orange, and only orange, as its recognized school color, right? Maybe. Looking on Wikipedia today will give you a slightly different answer, stating that Baker’s school colors are “Orange & Navy Blue.” So where does the truth lie?

My first stop on this investigation was the admissions office, where I hoped to gain a better understanding behind why the university finds value in telling potential students about our single color distinctiveness. Director of Admissions Cheryl McCrary provided some personal and historical insight on where the school has turned to for recognized school colors.

“When I was a student from 1983-87, in my mind, our colors were orange and black,” she said. “I never really thought much about it being only orange. After coming back in 1999, it was more of a marketing decision made by former President Dr. Dan Lambert and former Vice President of Marketing Annette Galluzzi. The stationery at the time changed to orange and blue. It was a matter of the look. They didn’t like the orange and black combination.”

According to McCrary, attitudes began to shift following the change. Some football alumni were upset at the switch from black to blue because the team&#8217;s uniforms had been all black.

“In recent years, when President Pat Long came aboard, Mike Grossner went to her and said, “I want to go back to black uniforms, and if we win, we get to keep the black,” she said. “For football, there was just this superstition that black was a dominant color. It’s a powerhouse thing and other colors were just kind of wimpy.”

To get a little bit more of the historical background, I sought out research from the University Archivist Sara DeCaro. Looking back through Baker yearbooks and newspapers that are over a century old gave a bit of insight.

“I looked and, to be honest, I couldn’t find much on why they chose cadmium orange,” she said. “Orange has traditionally represented Protestantism. I can’t say that we chose it specifically because of that but there is some longstanding tradition of orange representing Protestantism.”

Syracuse University – the only other university noted to have orange as its stand-alone color – started out as a Methodist university.

Stemming back the Baker newspaper in 1893, there was reference to a game against the University of Kansas in which Baker’s win was labeled as the “Orangemen” beating the Jayhawks. In Baker’s first yearbook, the Orange Blossom, from 1895, there is the first official university reference to the school color being cadmium orange.

However, that is not where the story ends. Why were additional colors brought in and used in combination with the real school color, cadmium orange, and how were they chosen?

Of course, everything with Baker’s association cannot simply be orange. There must be some kind of pallet of complementary colors that will allow for diversity throughout the university. And it seems apparent that the chosen ones – navy, black and grey – have largely been incorporated because of their neutrality. They simply do not conflict with the dominant cadmium orange.

“The whole idea of having a school color comes from heraldry, which goes back to medieval times,” DeCaro said. “It says you can’t have contrast between colors.”

With this historical background in mind, there appears to be some disconnect between Baker’s true history and Wikipedia’s notion of the university having two official colors. And quite frankly, it is hard to discern where that divide officially stemmed from.

“[Wikipedia] doesn’t sway me,” McCrary said. “I’ll continue having the frame of mind that it is orange. Whether or not you decide to use the accent color, that’s just trivial.”

We bleed orange at Baker. It may not be the same “cadmium orange” that is officially labeled as our school color within our history, but it dominates our thoughts of being unique. We see it in the paint that fills the Long Student Center walls, in the bookstore, in the title of the school paper, in the Alma Mater and in everything that President Lynne Murray wears.