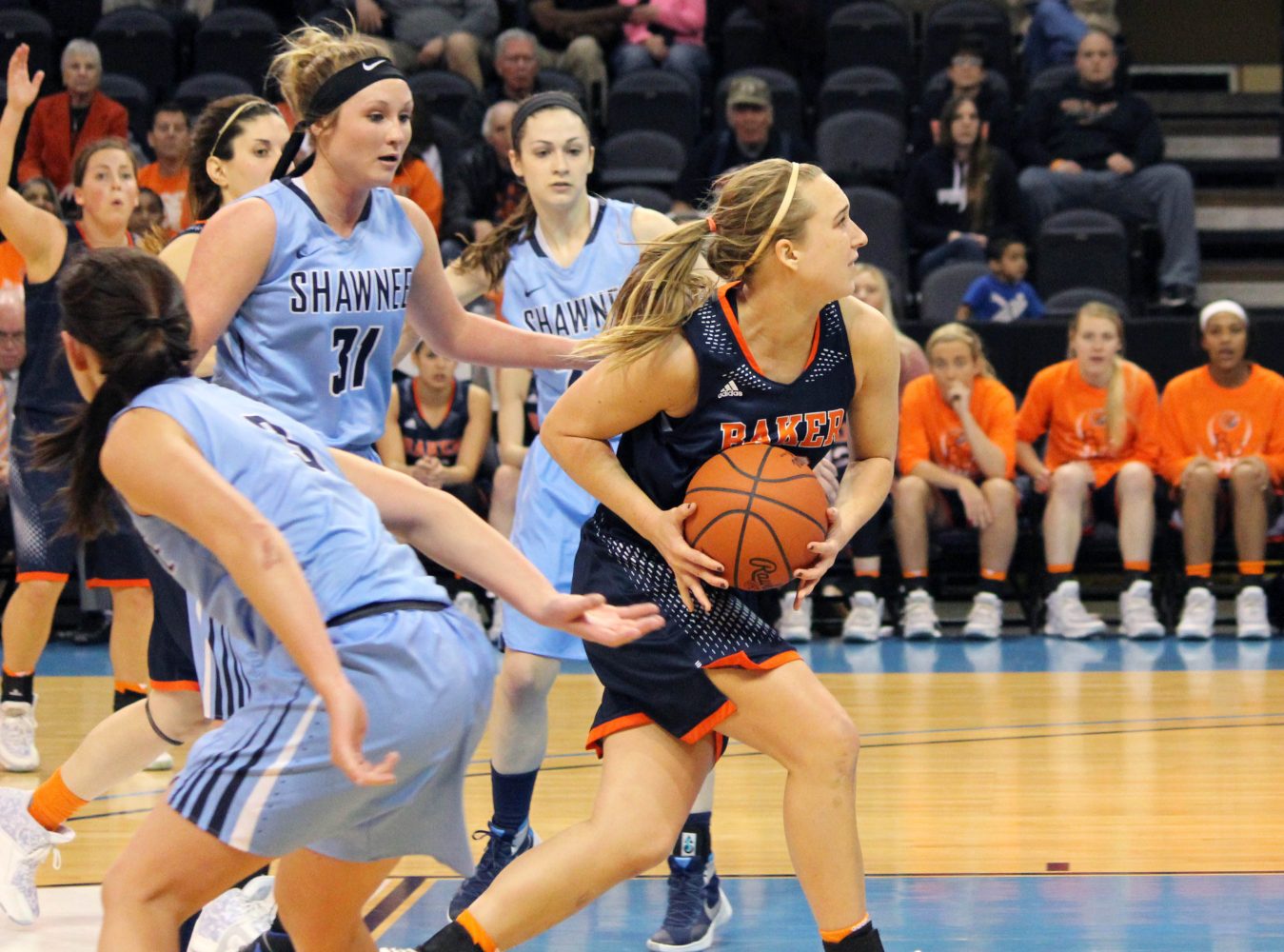 Senior Kelsey Larson was second in the NAIA in 3-point field goal percentage (48.3) last season and looks to lead the No. 13 Wildcats back to the national tournament in 2016-17. Image by Marilee Neutel.

The Baker women’s basketball team is coming off its best season in program history. The Wildcats won 28 games in 2015-16, highlighted by a memorable NAIA national tournament run in Independence, Missouri. The No. 13 Wildcats will look to pick up right where they left off, but this time it will be without the four winningest players in program history.

Head coach Ben Lister, who begins his sixth season with the Wildcats, recognizes that this year’s team will be different than the one that beat Benedictine in the NAIA Fab Four last March before losing to MidAmerica Nazarene in the championship game.

“We’re trying to not be last year’s team,” Lister said. “But we also want to identify with some of the characteristics of what made them successful and we’re trying to find that balance.”

They will have to replace four seniors from last season’s team: three-time conference Defensive Player of the Year and leading rebounder Macy Wallisch, second team all-conference guard and the team’s leading scorer Ericka Simpson, second team all-conference guard and second leading scorer Jami Hodge, who is now on the coaching staff as a graduate assistant, and Taylor Chase, who started at forward during Baker’s regular season conference championship in 2013-14.

The exiting senior class members won 96 games in their four years and were a part of all three of the program’s national tournament appearances.

“Each year we’ve lost a really good scorer or a really good defensive player, but our biggest loss from last year was the leadership,” current senior Kenzie Cook said.

Baker returns two starters from last season’s national runner-up team with seniors Kelsey Larson and Sydney Buchel. Lister expects those two veterans to be the leaders early in this season.

“I think a lot of the characteristics that we saw at the end of last year have carried over with those two,” Lister said. “I think they’re trying to set a similar tone and create a similar vibe to what we had when we started to make our run.”

Buchel started in 28 games and scored 6.1 points per game. She was also second on the team in rebounds (4.9 per game) and blocks (37). Buchel moved into her starting role in early December and never left the starting five through the national title game. Like Lister, Buchel knows that her leadership will be vital for the success of the team.

“We’re trying to create our own identity,” Buchel said. “Obviously we want to do as well as we did last year, but we want to have a totally different team.”

Buchel will also be counted on more in the scoring column, because the Wildcats have to replace 32.9 points per game on offense.

“She’s much more aggressive right now, as far as scoring, her leadership and her conditioning,” Lister said. “You can tell that she anticipates on going out on a high note and she’s going to put everything she can into us being successful.”

Larson missed the month of December due to an illness last season but started in every game in the second semester. Larson was an honorable mention all-conference performer last season. She scored in double figures in 17 of her 34 games and averaged 9.5 points per game. Larson was second in the NAIA in 3-point field goal percentage, sinking 48.3 percent of her attempts.

The Wildcats also return junior Caitlin Modesett, who dominated in the first semester for the Wildcats by scoring 15 points per game in November and December. Nagging injuries kept Modesett off the floor for most of the second semester, but she demonstrated how valuable she can be for Baker when she’s on the floor.

“Caitlin has the ability to be a top-tier player in our conference,” Lister said. “She is every bit capable of being a double-digit scorer for us.”

The Wildcats also return senior Kenzie Cook and junior Courtney Hoag in the post. Cook and Hoag combined for 8.2 points per game, and both were capable of big games coming off the bench. Cook scored in double figures three times on the season and Hoag did so twice, including a 14-point performance at MNU in the conference title game.

Cook played at the four position for the 2015-16 season, but she has moved back to the five for this season and will share time with Hoag.

“I think her footwork has improved tremendously down there,” Lister said. “She’s a more committed kid this year, and I think she wants to play at a higher level for her senior year.”

The Wildcats have seven new faces on the roster to mix in with the 11 returners from last season. Freshman Julia Bannister is a transfer from Hawaii Pacific University and went to Seven Lakes High School in Katy, Texas, with Buchel. Freshman Jodi Adkins is from Nacogdoches, Texas, sophomore Anna Hignight is a transfer from Missouri Southern State in Joplin, and Carrington Ream is from Ottawa. Junior Joann Lira and freshmen Taylor Smith and Kate-Lynn King were all red-shirted last season.

The Wildcats were picked to finish third in the Heart of America Athletic Conference behind the defending national champion and No. 1 MNU Pioneers and last season’s regular season conference champion, the Central Methodist Eagles. Lister believes that this team is in a great spot going into the upcoming season.

“The biggest thing that this group has is that they know how to win,” Lister said. “They’re experienced and I think they believe they can beat anybody in the country right now, based on the run they made. A lot of times that’s where success starts, and our seniors believe that they’re winners.”

“Every single year has been a completely new team, because our leadership every year has had a different style,” Cook said. “I think we’re going to be just as good of a shooting team, if not better.”

Lister is a defensive-minded coach and his team was first in the NAIA in field goal percentage defense (33 percent) and sixth in points allowed per game (54.9). This is the one area that Lister holds his biggest concerns.

“It’s going to be such an adjustment not to have Macy (Wallisch), and we did lose three, two-year starters,” Lister said. “Those kids knew how to guard and knew how to compete. We’re losing two kids that I think were in the top six in our conference in defensive ability.”

Since the Heart added both Clarke and Mount Mercy University to the league, the conference schedule has added four more games. The Wildcats play a 30-game schedule, with 26 of those games in conference. After two non-conference games against Ottawa and St. Mary on Nov. 4 and 5, the Wildcats begin conference play on Nov. 12 at Clarke. This schedule poses as a tough test for every team in the Heart.

“I think this will probably be the hardest year that I’ve coached from that standpoint,” Lister said. “Conference has a different feel than non-conference, and you don’t know enough about your team early to be able to put things together and go win a conference game, because you’re still trying to figure yourself out.”

Buchel looks forward to the challenge of a long and early slate of conference games.

“We’re focused on being 100 percent by the time that conference starts,” Buchel said. “We’re not going to get five or six games to get it together and figure out what works. We need to be ready to win a conference title from the first game of the season.”

The Wildcats will have to wait until Jan. 9 for their rematch of last year’s national title game with MNU. The Wildcats and Benedictine Ravens will meet for the first time since the Fab Four on Dec. 10 in the Collins Center.

Even though the Wildcats want to make sure that this team is different than last year’s, they still have the same goal in sight. This season that goal is to be playing on the highest stage at the national tournament in Billings, Montana.

“We want to be able to have a good, start-to-finish season and have something to show for that,” Cook said. “We want to bring home a championship.”