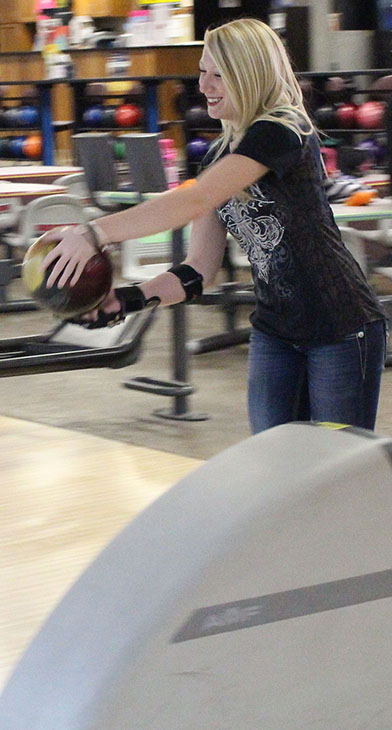 Junior Chenoa Rhades prepares for another shot during a bowling practice session. Image by Marilee Neutel.

Members of the Baker bowling team are feeling increasingly confident both individually and as a team.

“As a team we’re doing really well,” junior Mackenzie Mitchell said. “I think this year definitely could be the year we make it to nationals, so let’s hope.”

The Wildcats have seen improvement in placements this year. The ‘Cats took 10th place out of 29 teams in the 46th Annual Midwest Collegiate Tournament in Wauwatosa, Wisconsin, on Oct. 9, the team’s first tournament of the season. Mitchell also finished in the top 10 individually, taking ninth place overall.

The Baker bowling team then went on to compete in the Lindenwood Lions Classic in St. Charles, Missouri, on Oct, 30. The Wildcats finished second, just behind the University of Central Missouri.

“Last year we didn’t really place that high ever, and I think this year’s definitely going to be the year and people are definitely noticing it,” Mitchell said. “This last weekend, we ended up only losing one match which is pretty good.”

While scores in bowling can be counted both individually and as a team, the Baker bowling team stays committed to a strong team atmosphere. Mitchell said the new members to the team have made a “huge impact on the team.”

The Wildcats have begun preparing for their next tournament Saturday in Lawrence. Last year, Baker placed first at the Jayhawk Collegiate Challenge and hope to have a repeat this weekend.

“I think this will be the year people finally realize Baker has a bowling team, hopefully,” Mitchell said. “Last year we won the Jayhawk tournament, so hopefully we win it again.”

After competing in Lawrence on Nov. 6, the bowling team will travel to Moline, Illinois, where they will compete in the 16th Annual Leatherneck Classic. The Wildcats took home seventh place in the tournament last year.