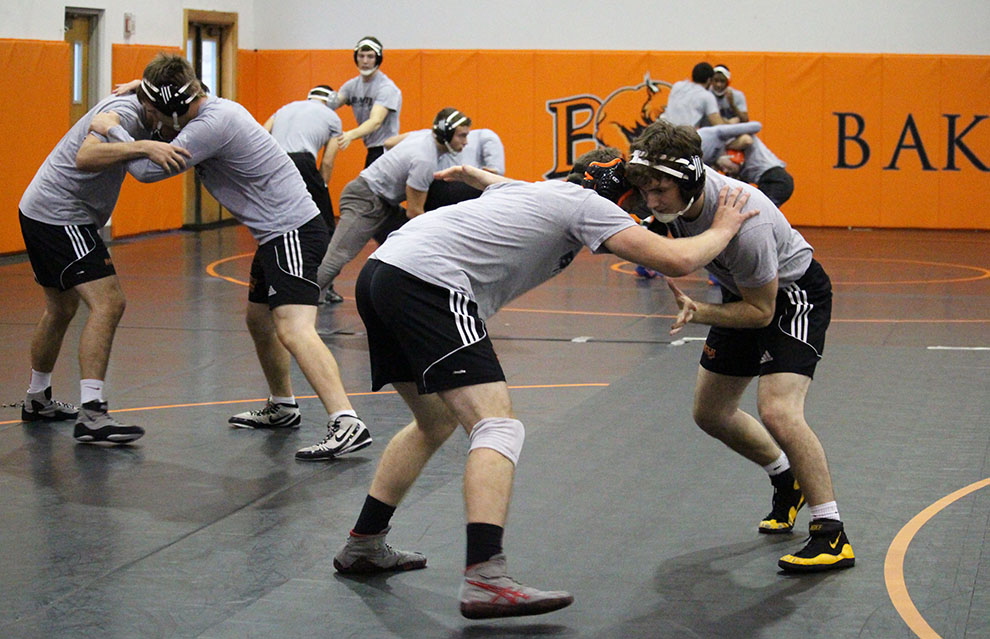 Wildcat wrestlers practice for their first event of the season, the Dan Harris Open, on Nov. 6 in the Collins Center. Image by Jenna Black.

In his first year as Baker’s head wrestling coach, Cody Garcia and his team recorded the greatest season in the program’s history with two NAIA national champions, Victor Hughes and Colby Crank. Hughes and Crank are Baker&#8217;s second and third wrestling national champs. The team took sixth place at the national tournament, its highest-ever ranking.

The Wildcat wrestling team will begin the 2016-17 season this weekend hoping to top last years’ success. The ‘Cats open the season ranked No. 15 in the NAIA Coaches’ Preseason Poll. Heart opponents Grand View and Missouri Valley were also in the top 20 at No. 1 and No. 13, respectively.

In his senior season, defending national champ Hughes will lead his team along with 2016 national qualifiers Kyler Atwood and Tyler Dickman.

Hughes is one of the seven wrestlers who transferred to Baker last year, following Garcia from Bethany College.

“I followed him [Garcia] here because I knew he could get me where I needed to be to reach my goals,” Hughes said.

The team adds 10 freshmen to the squad this season for a total of 38 wrestlers.

Crank will not be wrestling again this season for the Wildcats but will be on the coaching staff as a student assistant.

The Wildcats will host the Dan Harris Open Sunday in the Collins Center.