BU recycling opportunities may not be fully utilized 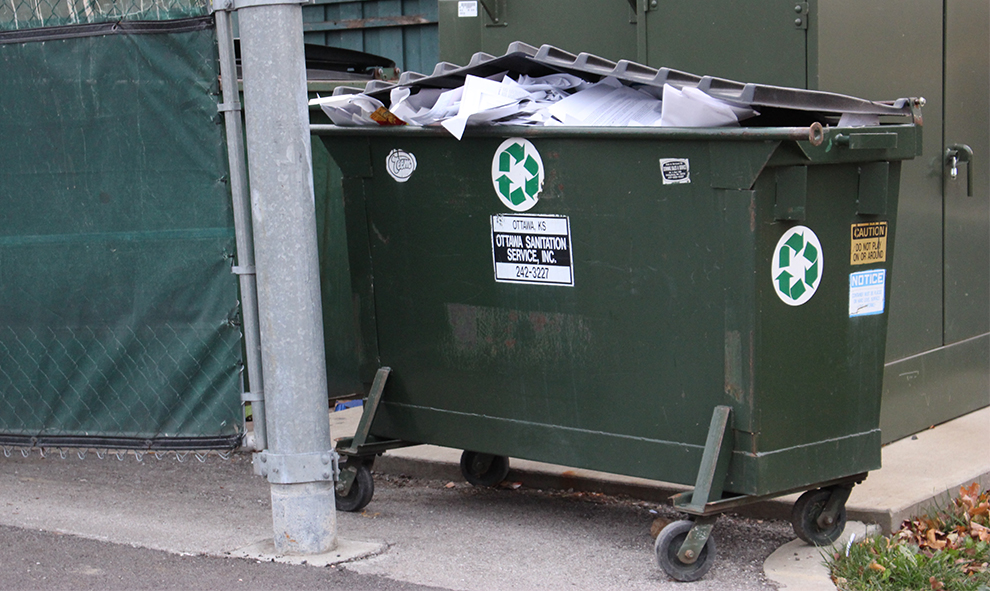 A small recycling bin outside the Harter Union overflows with paper. Image by Elizabeth Hanson.

Many Baker students have reported difficulties in recycling despite multiple places on campus to dispose of recyclables. However, according to several sources, any disconnect between Baker students and the recycling process might be fixable if more students were proactive in making recycling a priority.

“The only recycling bin I’ve ever noticed is the bin at the [Long Student Center],” freshman Spencer Bond said.

Academic Support Coordinator Kathy Wilson is the campus leader of the recycling program. She said the disconnect that some students are experiencing for recycling can be fixed.

“Baker has been engaged very actively in some form of promoting awareness and an actual program for recycling,” Wilson said.

Although recycling bins are located in most buildings with classroom, bins are not currently present in student housing. Wilson said that if student interest in recycling increases, then accommodations in student housing will be considered. There are also plans to acquire a larger bin for the Long Student Center.

“There aren’t a lot of people that necessarily come and ask about doing this,” Wilson said.

Junior Karl Konzi, a student recycling collection worker, said that if students are willing to recycle more, then he is willing to collect it.

“The students might be aware of [recycling], but they don’t do much about it,” Konzi said.

Wilson also said that many students are unaware of how to recycle properly. This includes students attempting to recycle items that either cannot be recycled or items that have not been washed out and cleaned, which can result in contamination. Many students also do not take the extra measure of breaking down cardboard boxes to make more space for recycling.

In the past, Earth We Are, a Baker student-run conservation group, made many efforts to increase local recycling programs. Members also helped educate students on how to properly and safely recycle. The organization dissolved three years ago due to lack of participation.