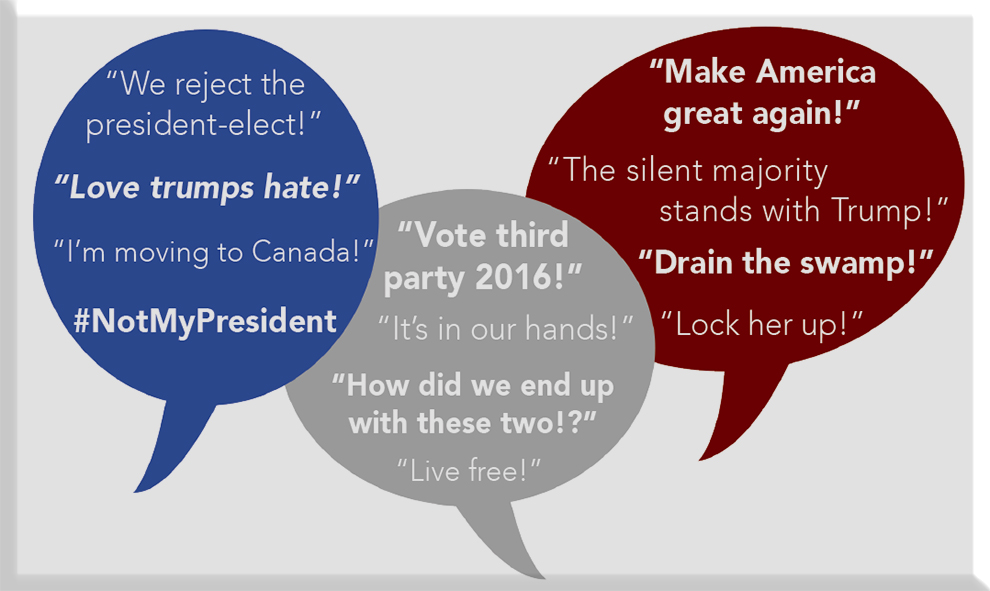 In response to last week’s presidential election, expressions of anger, disappointment and fear rang out across social media outlets, during organized protests and inside college classrooms across the nation.

On the day after the election, some Baker professors and students walked across Taft Bridge with tears in their eyes and heavy hearts, while others celebrated newfound hope and trust in the American political system.

Locally, Douglas County favored Hillary Clinton over Donald Trump, which contradicts the overall Kansas results. In Douglas County, 62 percent of voters favored Clinton, while in Kansas she only received 36 percent of the votes. Students at the University of Kansas and Baker University likely affected the Douglas County results.

Yes, Clinton would have won if the vote had been solely up to millennials; however, the results show they were not as supportive of her as they were for some past presidential candidates.

There was little to no millennial backlash when Obama was elected in 2008 and 2012, so why do some students have such a negative reaction to Trump? Some Baker students say it is because they believe he represents sexism, racism and homophobia.

Sophomore Freddie Barnes, who is a Trump supporter, said he believes people are misinformed on Trump’s values and that the media have created a biased and inaccurate image of Trump.

“In 30 years of being in the media spotlight, he has never once been called a racist, but as soon as he runs against the Democratic Party, he’s the worst guy in the world,” Barnes said.

However, not all students believe the new president is impartial toward minority groups.

Senior Kaci Dillingham said she thinks Trump doesn’t care whether minority groups succeed, and his rhetoric during his campaign negatively impacted those groups.

“I think minorities have a right to be scared, not of him, but of the people who backed him because of his racist rhetoric,” Dillingham said.

The anti-Trump protests following the election, including one held in Lawrence on Saturday, Nov. 12, share a message of equality and a cry for minority representation.

Professor of Sociology Tim Buzzell is currently teaching an upper-division politics class and says throughout this election his class has had raw and honest conversations about students’ reactions as well as what to do next.

“Everyone needs to express where they’re coming from right now, (with) feelings and experiences being shared,” Buzzell said.

He said protest is a form of conversation between two groups that differ in opinions, and that it is the way voices are expressed and heard.

“People are wanting to have their voices heard,” Buzzell said. “That’s hard when there’s a great deal of animosity and disrespect between groups.”

Dillingham believes these voices include some who now feel marginalized and unrepresented as a result of this election.

“I worry these next four years will cause feelings of entitlement for some and feelings of exclusion for a lot of others,” Dillingham said.

Buzzell encourages us to “listen deeply to one another.”

Director of Diversity and Inclusion Teresa Clounch agreed that students, faculty and staff need to sit down in meaningful and open conversation.

She said she wants all students who are feeling marginalized and fearful now, regardless of how they voted on Nov. 8, to feel safe.

“For that to take place, I believe we have to sit down and have conversations with people with views that are different from our own,” Clounch said.

However, she also acknowledges that conflict and challenges may be a necessary part of the transition process.

With so much emotion surrounding the election, some protests have been loaded with anger and occasional violence.

“People will talk about how Trump will destroy the country, but then they go burn, loot and proceed with violent protests,” Barnes said.

Barnes does believe Trump has done some wrong things, but also said so have all past presidents, as well as every human being.

Buzzell added, “The president and Congress now have the opportunity to deliver on promises made in the campaign to make America great again.”