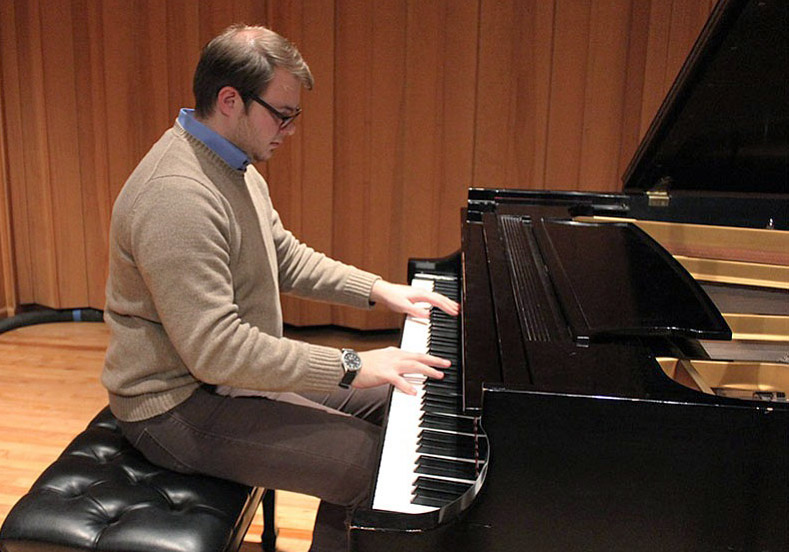 Taking his seat at a table in the Homestead Kitchen and Bakery in Baldwin City, senior Collin Studer sets down his bowl of soup and his coffee cup. His hair and sweater are wet, as he has just come in from the rain outside. He smooths down his hair, straightens out his sweater and asks a question, “Why is the paper interested in writing a story on me?”

One answer lies in Studer’s accomplishments. During his years at Baker, he has conducted the Overland Park Community Orchestra, been a member of the University Concert Choir and Chamber Singers, served as president of the Zeta Chi fraternity and attended conferences as a student representative of the history department. Next, he will apply for law school.

Studer has developed particularly strong relationships with two faculty members, Associate Professor of History John Richards and Professor of Music Trilla Lyerla, both of whom say that Studer is exceptional as a musician and scholar.

He grew up in Wathena, a town located in northeast Kansas. Wathena is home to fewer than a thousand people. Growing up in such a small town allowed Studer to be involved in lots of extracurricular activities that helped him discover his interests.

“I don’t want you to think that I was some kind of star athlete, because I was not, but I did play on the football, basketball and track teams,” Studer said.

As a child, Studer took formal piano lessons until he was in the seventh grade. When he stopped taking lessons, he still continued to play and practice. In his sophomore year of high school, he stopped playing a few sports and shifted his focus to music. This ended up leading Studer to Baker. While in high school, he attended the all-state piano competition on Baker’s campus, where he had the chance to meet some of the music faculty.

“The piano festival got me to this place, but the professors are what made me stay,” Studer said.

After playing a set of solo piano pieces by Bach, Haydn and Chopin at his senior piano recital on Nov.13 in McKibbin Recital Hall, he stepped back out on the stage accompanied by Lyerla, his piano instructor. Earlier in the recital, Studer was wearing a tux, but he switched to a red-and-black flannel shirt that matched Lyerla’s. They went on to perform two dual piano pieces, “Saturday Night Waltz” and “Hoedown” from Rodeo by Aaron Copland.

Lyerla has instructed Studer in piano for nine semesters, beginning in the fall of 2012. She said he now plays pieces that are far beyond what she could have imagined when he first came into Baker, and he now not only performs but understands the music as well.

“My life has been blessed by knowing Collin Studer,” Lyerla said.

Studer also has strong connections with the history department and Richards. He added a history major to his music major during his junior year. Once he became a part of the department, Studer took full advantage of its opportunities, attending a history conference as a representative for the university. There he presented a paper and received feedback from other professors and scholars.

“He’s an exceptional person,” Richards said. “He is a remarkable demonstration of how the liberal arts can work.”

While at Baker, Studer said that one of the most important skills he learned is how to speak in public, because it applies to so many facets of life. As a freshman, Studer says he was terrified to give a presentation, and he would have anxiety about it the entire week before the presentation. Now he says that he enjoys getting the opportunity to speak in a class.

“That’s something that I think the Quest program really does well,” Studer said. “Because you have to present and speak so many times.”

Studer also credits the Quest program for the shift in the way he thinks, helping him progress “from simplistic thinking to complex thinking with a deeper analysis.”

“Things were no longer just black and white,” he said. “There’s a lot of gray.”

Studer will begin applying for law school this winter. As a music and history major, his main interest is in constitutional law. He hopes to be accepted into the University of Virginia, Harvard or Yale.