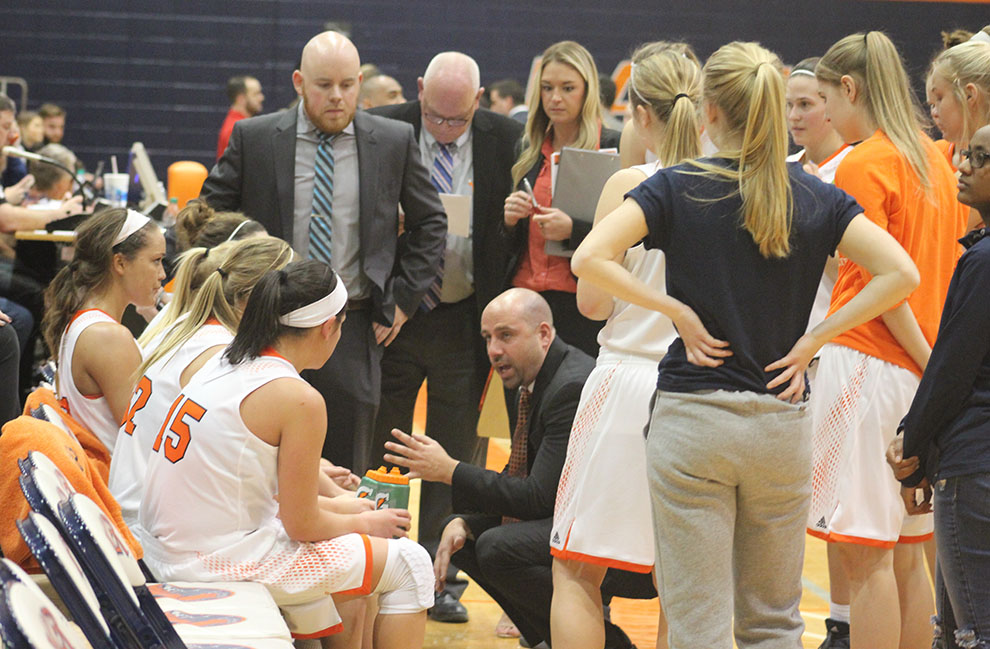 The women's basketball team gathers around coach Ben Lister during a timeout. The Wildcats made a school-record 18 three-point baskets to upset rival MNU 86-60. Image by Shelby Stephens.

Wildcat wins against both MidAmerica Nazarene and Graceland University at home place Baker at the top of the Heart of America Athletic Conference standings with an overall record of 13-3 and 11-1 in the Heart.

The No. 14 Baker women’s basketball team made a school-record 18 three-pointers in its 85-60 victory against Heart rival No. 5 MNU on Jan. 9 inside the Collins Center.

Baker played a dominant offensive game, going 18-29 from three-point range and shot 51 percent from the field. On the defensive side, the Wildcats held MNU to shooting 30 percent and forced 11 turnovers.

At the end of the first half, Baker led the Pioneers 40-21. Freshman Taylor Smith kept the ‘Cats energized by making a buzzer beater just before the break.

Despite Pioneer Triston Wicks’ explosive game with 20 points and 8 rebounds, the Pioneers fell to 10-4 overall and 9-2 in the Heart.

On Thursday, Jan. 12, the Wildcats continued their conference domination with a home 78-49 home win over Graceland University.

The Wildcats had three players in double figures combining for a total 42 points. Zweifel and Hignight led the Wildcat with 16 points each, followed by Hanson with 10.

On the defensive end, Baker kept the Yellowjackets at 25.8-percent shooting and forced 18 tunrovers in the game. Hanson and Courtney Hoag led the Wildcats in rebounding with eight each.