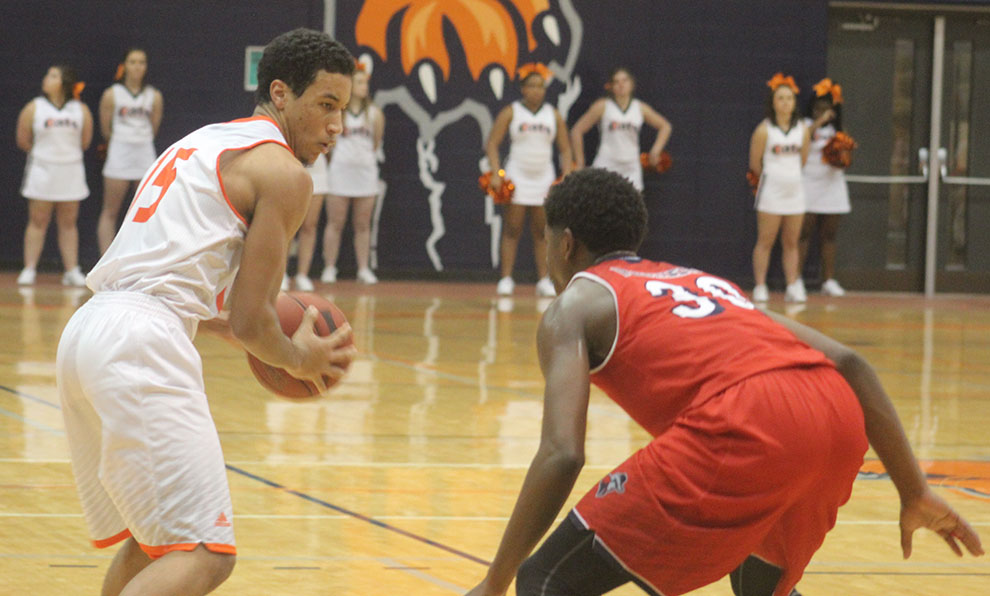 Clae Martin stares down an MNU defender Jan. 9 inside the Collins Center. Martin put up seven points for the Wildcats, along with collecting two rebounds. Image by Shelby Stephens.

After two close matches at home in the Collins Center, the Baker men’s basketball team is now 8-8 overall and 5-7 in the Heart of America Athletic Conference.

The Wildcats’ hard-fought effort fell short against MidAmerica Nazarene in a 74-73 loss on Monday.

The Wildcats led the Pioneers for almost the entirety of the game, until a late three-point basket by MNU’s David Nelson gave the Pioneers the lead in the final seconds.

Baker began with a dominating first half, going ahead 15-4 in the first six minutes, with the Wildcats’ largest lead being 18 points.

Three ‘Cats were in the double figures against MNU, with 15 coming from junior Daniel Young. Young went 4-5 in three-point shooting and recorded five rebounds and three blocks.

Senior Tyrome Parker finished with 14 points along with 10 rebounds and three assists. An additional 11 points came from senior Javeion Gray.

Two MNU players led the offensive effort for the Pioneers as they chipped away at the deficit. Justin Randall put up 25 points and 7 blocks. Nelson scored 23 points, including the game winner.

MNU was the Wildcats’ first loss in the month of January after a 64-63 win against Evangel and an 84-75 win at Peru State.

Baker then faced the Graceland Yellowjackets at home Thursday night, when another close game ended with the Wildcats falling short in a 71-68 loss.

The Wildcats took the lead in the first half, ending the half with a 43-36 lead. Four ‘Cats ended in double digits for the night. Gray finished with 16 points, while Young finished with 14 points and five rebounds.

Clae Martin finished with 12 points, and Tyrome Parker had 11.

The Yellowjackets fired back in the second half by outscoring the Wildcats 45-35. Graceland’s LT Davis had a game-high 29 points followed by Jeremy Deemer with 22 points.

Graceland improved its record to 8-4 in the Heart and 11-5 overall.

Baker will know go on the road to take on the Grand View Vikings at 2 p.m. Monday in Des Moines, Iowa. Due to possible icy conditions, the game was moved back from Saturday. The Vikings are currently 9-3 in the Heart and 10-4 overall.