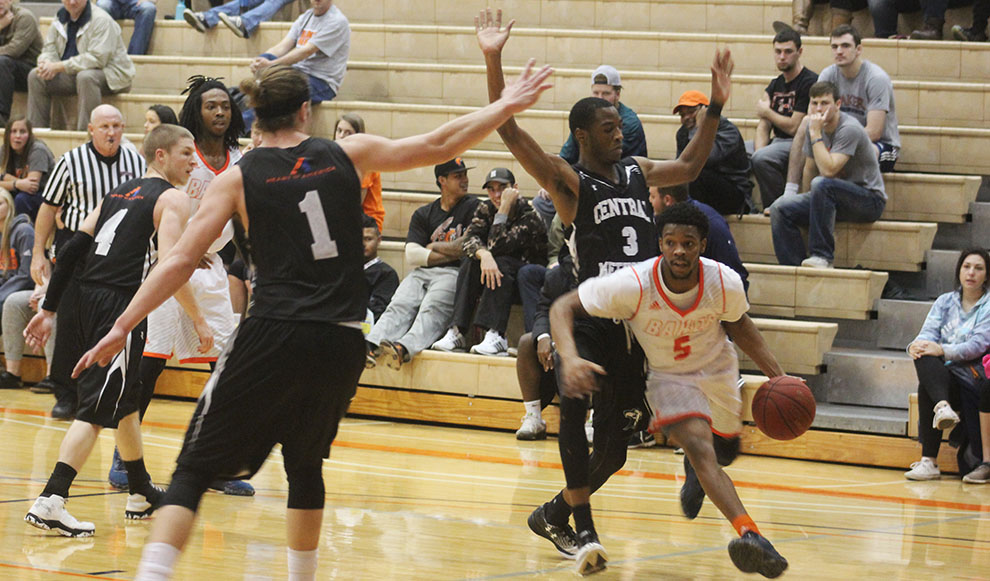 Senior Tyrome Parker dribbles past a Central Methodist defender to get to the basket. The Wildcats defeated CMU 79-68 Wednesday, Jan. 18. Image by Shelby Stephens.

The Baker men’s basketball team has used big second halves in its last two Heart of America Athletic Conference games to propel the Wildcats to home victories against Central Methodist and Clarke.

The Wildcats first defeated Central Methodist University 79-68. Baker was able to tie the game 29-29 going into halftime, then followed up with a strong offensive second half to win inside the Collins Center Wednesday night.

The Wildcats shot 51.9 percent from the field. Three players for the Wildcats scored in double figures, including senior Taylor Johnson with 15 and senior Tyrome Parker and junior Brock Mick with 11 each.

Baker proved to be a second-half team again Saturday with a comeback victory against the Clarke Unviersity Crusaders.

Baker was able to overcome a 10-point halftime deficit with a major second half, outscoring the Crusaders 42-22.

Junior Dan Young led the Wildcats with 11 points, while Johnson and Mick put Clarke under pressure with four steals each in the game.

Baker has now won five of its last seven games and is currently 10-8 overall and 7-7 in the Heart conference play.