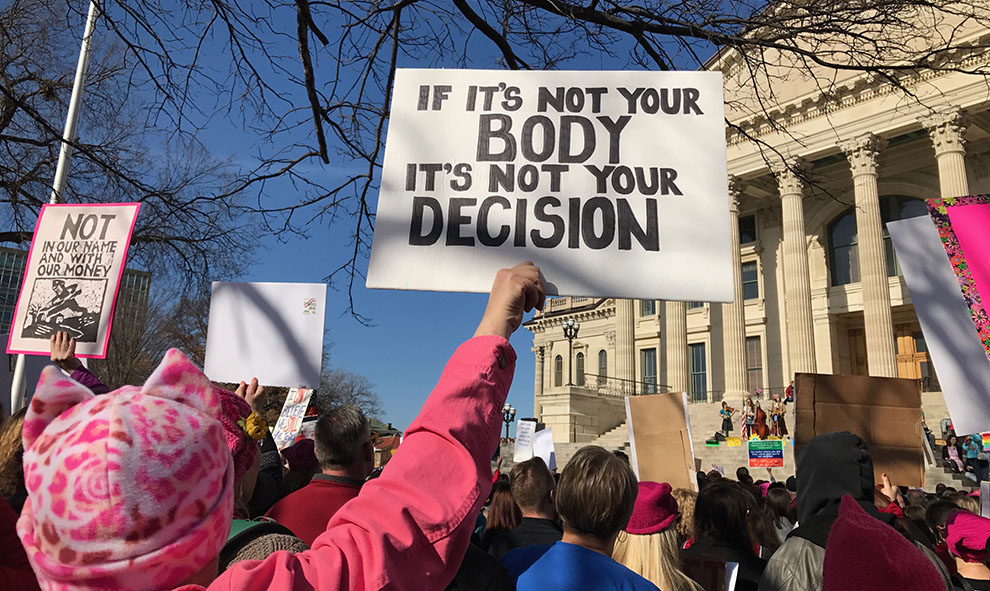 Following the inauguration of President Donald Trump, a few Baker students attended the local Women's March in Topeka and protested alongside more than 3,000 other participants.

An estimated 3.3 million people marched in protests in over 500 U.S. cities on the day following the Inauguration of Donald Trump as the 45th President of the United States, according to Vox, in what was labeled as the “Women’s March.” Participants gathered around town squares, capitol buildings and city streets to protest, standing up for women’s rights.

A handful of Baker students attended the local march in Topeka, protesting alongside more than 3,000 other participants. Senior Brittney Harmon, former president and co-founder of the Total Equality Alliance, was one of them.

“Going to the Women’s March was an easy decision for me,” she said. “Many women say that there is no issue with equality simply because they feel that they are not impacted by it. However, I chose to stand up next to all of the other women marching for those who are not treated equally in their workplace, at home, and for those who may not have the ability to let their voices be heard.”

Organized by Susan Christensen, a teacher at Topeka Collegiate, and Stephanie Meehan, a professor at the University of Kansas, the Women’s March on Topeka featured more than a dozen speakers who touched on topics including Planned Parenthood, religion, disabilities, race, gender and sexuality.

“It was inspiring to see women there much older than I was saying how long they have been fighting this fight,” Harmon added. “It was also great to see many men present, expressing their feelings and discussing how important it is for them to stand up next to their wives, sisters, mothers and daughters to help give them the same privilege that men have. Besides, it is not just the injustice of gender that had women marching, it was also, and continues to be, for religion, persons who are disabled, race, LGBT+, and many others.”

“I chose to go because I believe that it is important and necessary to give a voice not only to women but to all marginalized groups,” Kniffin said. “I mostly enjoyed reading the signs that people had made because it was interesting to see different causes that people were most invested in.”

Organizers say the march was only a small portion of the work to be done for women’s rights. Activists from around the world celebrated the beginning of the move toward achieving equality, emphasizing that it has been noted as one of the largest demonstrations in history.

“I hope that the Women’s March will continue to empower all persons across the globe that can see this unequal system that we are forced to live in,” Harmon said. “However, I fear that many people do not agree with the movement and I wish for everyone to take a look at it with an open mind and heart to re-evaluate how they view the importance.”