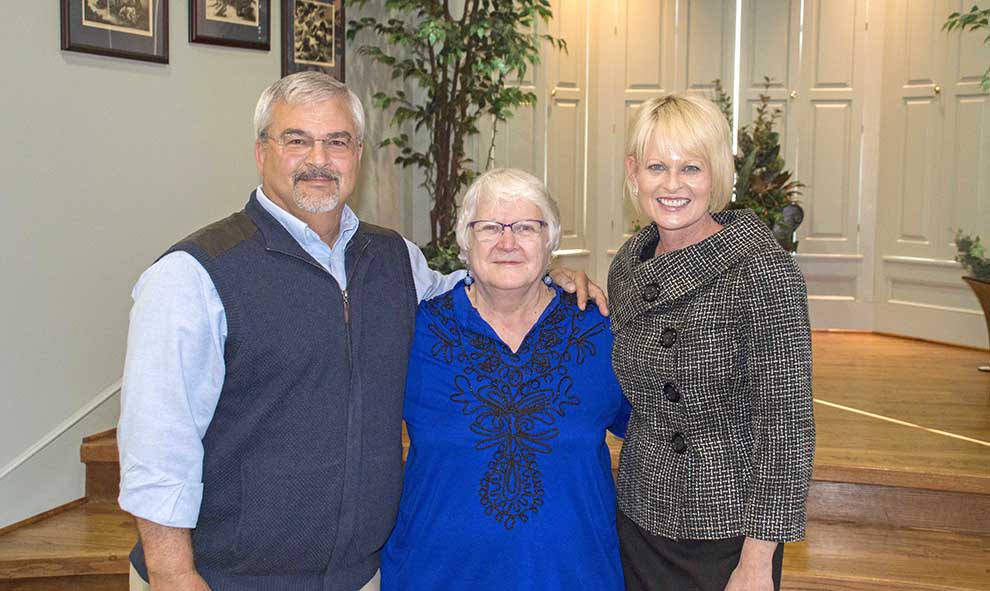 As part of the Celebration of Service ceremony on Jan. 24, President Lynne Murray (right) recognized Rand Ziegler and Jeanne Mott for their 35 years of service to Baker University. Photo by Taylor Shuck

In 1981, Ronald Reagan was president and the average price of gas was $1.13 a gallon. Here in Baldwin City, certain sights would remain the same, including the buildings of Baker University. While the staff would have looked different in 1981, two employees who are still here today were beginning their careers as faculty members. Professor of Psychology Rand Ziegler and Senior Director of Financial Aid Jeanne Mott were recognized during the Celebration of Service ceremony on Jan. 24. for having served 35 years at Baker University. Rand Ziegler and President Lynne Murray at the Celebration of Service ceremony on Jan. 24.Photo by Taylor Shuck

When Ziegler first came to Baker from West Virginia in 1981, he does not deny having to “look up in an atlas where Baldwin City, Kansas, was on the map.” He packed up a U-Haul and made the trip on I-70 to begin what would become a lifetime career.

Ziegler came to Baker with the assumption that it would be a “good first job.” He moved to Lawrence and immersed himself in both the Lawrence and Baker communities. This led him to meet his wife Marci, who is now a fellow Baker professor, and ultimately falling in love with his life in Kansas.

In his 35 years as a faculty member, Ziegler has held many titles including assistant and associate professor of psychology, official registrar and associate dean, to name a few.

After a stint on the administrative side of education, Ziegler eventually rejoined the teaching staff.

“I’m really excited to be back here teaching again,” Ziegler said. “I’ve told other people that even though I enjoyed my time in the administrative roles when I got back into the classroom it woke me up and reminded me why I even got into this business to begin with.”

Because of the many years at Baker, Ziegler has had the opportunity to teach different generations of students. While each new generation is a challenge at first, Ziegler said he is constantly adjusting his style of teaching to relate to his students.

A colleague of Ziegler, Associate Professor of Psychology Sara Crump, said she enjoys working with Ziegler because of all the knowledge he holds.

“He is the institutional memory of this place,” Crump said. “If I ever have any questions, I know I can go to him and he’ll know what the answer is since he’s been here for so long.”

Although Ziegler is approaching retirement eligibility, he does not plan to take it quite yet.

“I’m still having fun and I still relate to the kids pretty well,” Ziegler said. “As long as I get good feedbacks and evaluations, I can see myself doing this for a while longer. I think I will do this until I’m no longer an effective teacher.”

When Ziegler first moved to Kansas, he did not expect to stay, but he uses that story to show his appreciation and love for Baker University.

“Well, I came here thinking I was only going to be here two or three years, and here I am 36 years later,” Ziegler said. “That’s a testimonial to the school. It kept me here all that time.”

Jeanne Mott and President Lynne Murray at the Celebration of Service ceremony on Jan. 24.Photo by Taylor Shuck

After having her son and receiving her master’s degree from the University of Arizona 36 years ago, Mott decided it was time to settle down and find a teaching job.

Baker was advertising a position in a national publication, and Mott was impressed with the university when she came for her interview. She said she was looking for a teaching position at a small college, and Baker “fit the bill.”

When she first began at Baker, Mott was the chair of the Home Economics Department until it was disbanded in 1988. While she was teaching, her favorite class was the History of Fashion. Following the disbandment of the department, Mott was given the opportunity to work in the financial aid department, where she remains today.

During her 35 years here, Mott said she has witnessed many aesthetic changes; however, other fundamental attributes of the university have remained constant.

“There has been a lot of curricular changes since I came as well as a lot of growth from certain areas that has been very positive,” Mott said. “It has always been a close-knit community at the student level, the staff level, and the faculty level. That is one of the things I think that keeps people at Baker, that sense of community.”

Displayed on the corner wall of Mott’s office in Denious Hall are the awards that she has received. While many came from outside organizations, one in particular sparks the memory of a cherished moment.

Mott said Baker has provided her with many opportunities for professional development, and the “great staff” that she works with keeps her working full-time. She has embraced a variety of positions and advises students to do the same.

“Every student needs to understand that every position they are in leads to something,” she said.

As for how long Mott will remain working at Baker, she said her “mission is not complete,” and she will continue working until it is.