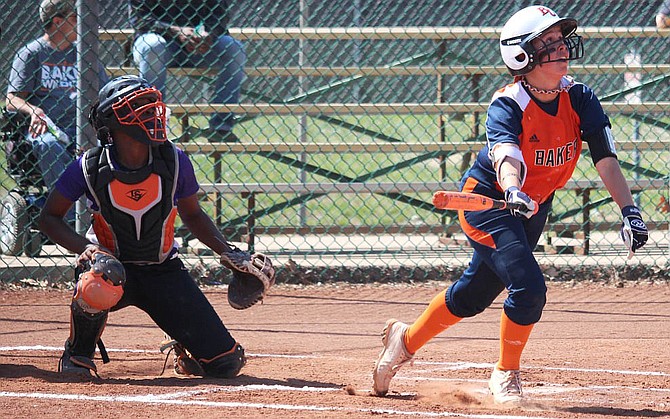 Steph Cardona is one of the Baker softball team's key returners for this 2017 season. Cardona scored 31 runs last season. Image by Khadijah Lane.

After an up-and-down 2016 season, the Baker softball team will look to improve on last years’ record of 26-29.

The Wildcats started strong in 2016 but fell short in the last month of play, recording only two wins in the entire month of April. Junior catcher Savannah Bellem believes that injury and fatigue played a roll in last year’s shortcomings.

“You could tell that the energy and drive was lacking toward the end of the season, and our performance on the field reflected that,” Bellem said. “This year I think we learned from our mistakes, and we are prepared to combat adversity this season.”

Three key contributors to last year’s team will return to the team this year, including junior Stephanie Cardona and sophomore Caitlin Hardgrove, who both scored 31 runs last year, as well as sophomore Hannah Tolliver, who recorded 33 runs and stole 18 bases.

“This year we have a lot of depth with the freshmen,” Bellem said. “We brought in a lot of speed, which will really contribute the amount of runs we are able to score.”

The Wildcats will also have five seniors with experience. Bellem believes the upperclassmen have been welcoming to the freshmen and hope they feel prepared going into the season.

“I think the veterans on the team will definitely help the freshmen adapt to being so busy in season since they know what to expect,” Bellem said. “As a freshman, it can be overwhelming when games get going and you’re playing for up to five hours at a time.”

The team lost three seniors last year, including Cari and Kelsey Vollenweider and Ilona Miller. Bellem says the team has had a lot of leaders step up this year, which helps make up for the losses.

Pitchers returning to the mound include Teagan Louthan, Madison Nedved, Antionette Zamudio and Olivia Brees, who had a 2.45 ERA last season.

Bellem says the team has had improvements in both offensive and defensive sides.

“I think the biggest struggle our team might see is adjusting to hitting live pitching other than our own,” Bellem said. “Defensively, we have a lot of depth, so if someone is not performing up to standards, there is someone ready and willing to step in.”

The team will begin its season by traveling to Conway, Arkansas, to compete in the Central Baptist Tournament Feb. 17-18. The Wildcats will face four teams while in Arkansas, including Bacone College, Hannibal La-Grange University, Ottawa University, and No. 5 William Baptist College.

“I think we are ready for the challenge,” Bellem said. “We have played top schools in the nation in the past and have competed and almost beat some of them. There are some nerves, but I think the excitement will overcome these nerves.”