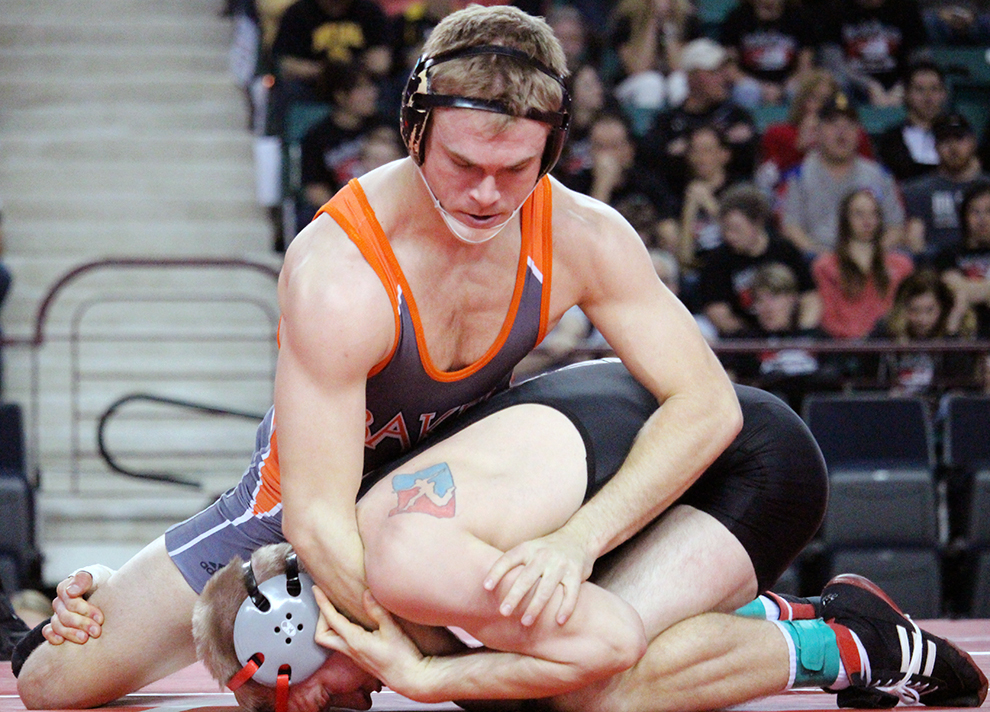 Victor Hughes holds down Southern Oregon's Tyler Cowger in the 2016 NAIA national championship match. Hughes has qualified for another trip to the national tournament to defend his title. Image by Khadijah Lane.

Four Wildcats will compete in the 2017 NAIA Wrestling National Championship after qualifying on Saturday in Des Moines, Iowa.

Among the Wildcats who qualified was defending NAIA national champion Victor Hughes in the 149-pound weight class. Hughes now has a chance to become the first athlete in the history of Baker athletics to win two individual NAIA National Championships.

The three other Wildcats who will accompany Hughes on the trip to the NAIA National Championship are 125-pound Zane Baugh, 157-pound Jon Blackwell, and 197-pound David Dow.

To automatically qualify for the NAIA National Championship, wrestlers must finish in the top three of their weight class at the regional qualifier.

In the 125-pound weight class, Baugh secured his place in the top three by winning over Dickinson State’s Anthony Locke in a 3-1 decision.

Hughes won the second spot in the 149-pound weight class but lost to Grand View’s Walker Marshall in a 12-9 decision during the first-place match.

Four Wildcats found themselves facing teammates for a spot in the NAIA National Championship.

As a team, Baker finished second with 138 points behind No. 1 Grand View, which finished with 215 points.

Even though the National Central Qualifier is over, wrestlers still have the opportunity to qualify for nationals through 30 wrestling spots that are determined by a selection committee. A maximum of 15 nominees can be considered by the committee from each area. The selection committee chooses its qualifiers on Feb. 21.

The 2017 NAIA Wrestling National Championships presented by USA Wrestling-Kansas will be held March 3-4 in Topeka.