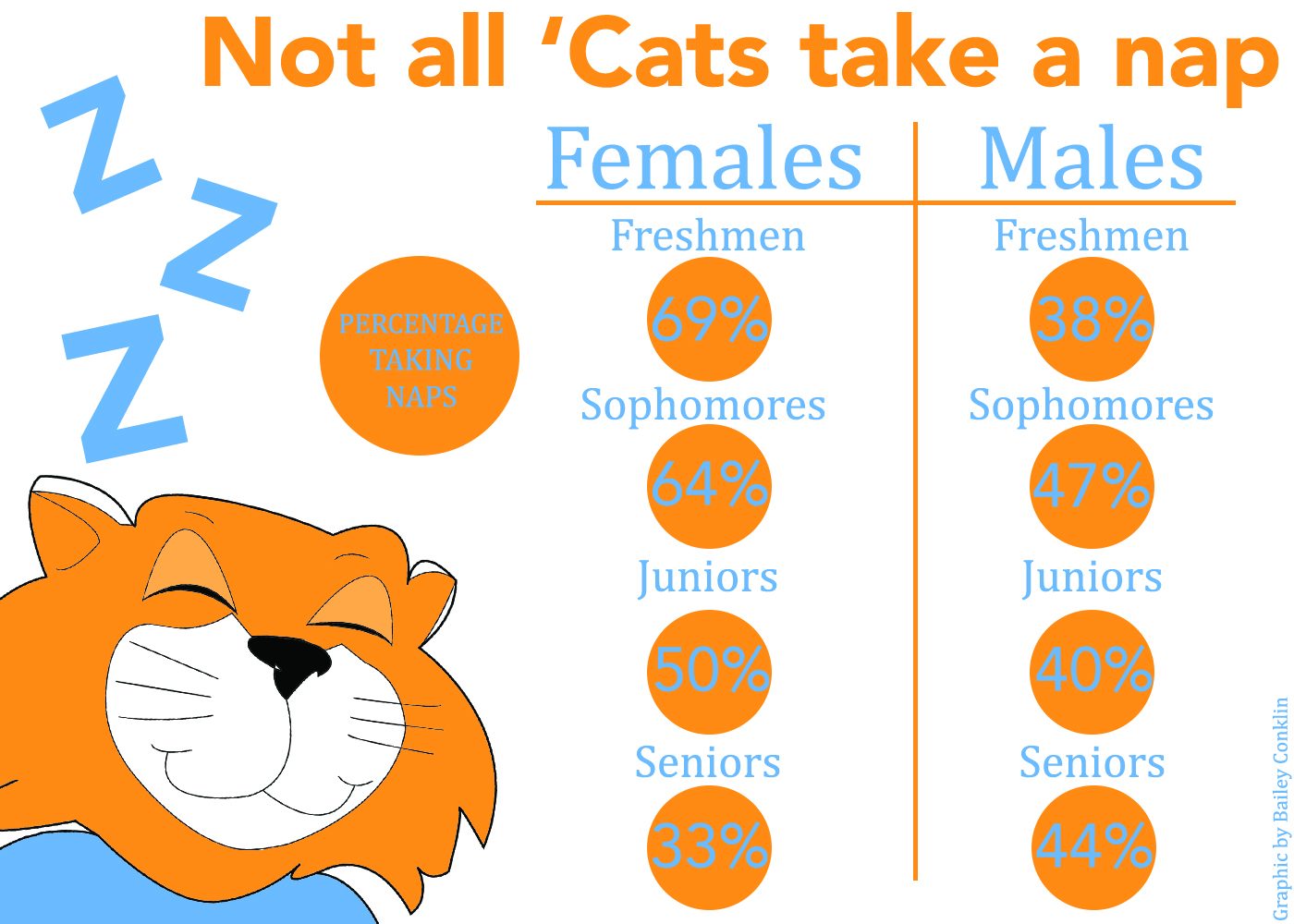 An informal survey of 100 BU students shows the percentages of men and women who admit to taking naps. Graphic by Bailey Conklin.

If students needed a better reason to nap, they will soon have it with National Napping Day on March 13, the Monday of spring break.

On a typical day, more Baker students are napping than the average percentage of adults napping in the United States. In an informal survey of 100 BU students, more than half of them said they take a nap on most days.

According to the Pew Research Center, out of U.S. adults aged 18-29, only one-third of them are taking naps.

It’s not hard for most college students to find time to nap throughout the school day, with breaks in between classes and before or after dinner, but some students have a greater likelihood of napping than others.

Geenens usually gets nine to 10 hours of sleep a night but still partakes in daily naps. Geenens began taking naps in high school, something that has carried over into her college days.

“I think that [taking naps] is a stress reliever,” Geenens said. “Especially when I have a stressful day, the one thing I want to do is go relax in my bed by myself, then it makes me tired and I fall asleep.”

The National Sleep Foundation says that a nap of 20 to 30 minutes in length can help improve mood, alertness and performance. Also useful to students, taking a nap can help diminish stress. A 2007 study from the Department of Psychology at Texas A&M University found that napping and resting served to improve mood regardless of whether a person habitually took naps or not.

Some people wake up from a nap feeling refreshed, while others wake up feeling groggy or even sick. Geenens said she has had enough practice taking naps to wake up feeling the benefit of a nap.

Other students, such as junior Austin Johanning, think napping is unproductive. Johanning is student-athlete double majoring in business and sports administration.

“I’ve never taken naps,” Johanning said. “It’s never really been part of my routine to take a nap. I feel like there are more productive things to do.”

Johanning thinks students often take naps because they don’t get as much sleep as they need during the night.

“With college, you have such open schedules that there’s massive amounts of time, with what better to do, but nap,” Johanning said.

Assistant Professor of Psychology Robyn Long thinks more students should be like Johanning and skip the nap.

“I actually think students, unless they are sick, don’t need to nap,” Long said. “The research that I’ve read related to what we call sleep hygiene suggests that napping is counter-productive in terms of overall productivity and wellness.”

Long said she has read research indicating that those who nap for more than 20 minutes a day alter their biological rhythms that help them sleep at night. Natural cues help us prepare for sleep at night, an example being the release of melatonin in our body. Napping can disrupt that rhythm, making it more difficult to sleep as night.

“People who nap alter that [rhythm],” Long said. “So they might find themselves going to bed later and later each night as a result of their nap and then feeling more and more fatigued the next day.”

Geenens thinks that Baker students often want to nap due to late night extra-curricular activities, such as organizations meeting at night or athletic practices running late.

At a university like Baker, where such a large portion of the student body is comprised of student-athletes, it isn’t surprising that almost three-fourths of the students who were surveyed said they exercise on a typical day. For many athletes, the opportunity to nap is substituted with time at the gym.

Since students have the option to choose their schedule in college, they can end up with long breaks in between classes. During those breaks, they can choose between a nap or a trip to the gym.

Long suggested taking classes that start at the same time on each day in order to build up a more reliable schedule, one that doesn’t involve naps.

“Even though you could decide to start on Tuesday/Thursday at 12:30, don’t. Take the earlier class, not the earliest class,” she said. “Let’s say your Monday, Wednesday, Friday, classes start at 9:30. Try to make your Tuesday/Thursday classes match that.”

Class start times will not be a concern one week from now, though. If they survive midterm exams, BU students should be able to nap easy for spring break and National Napping Day.