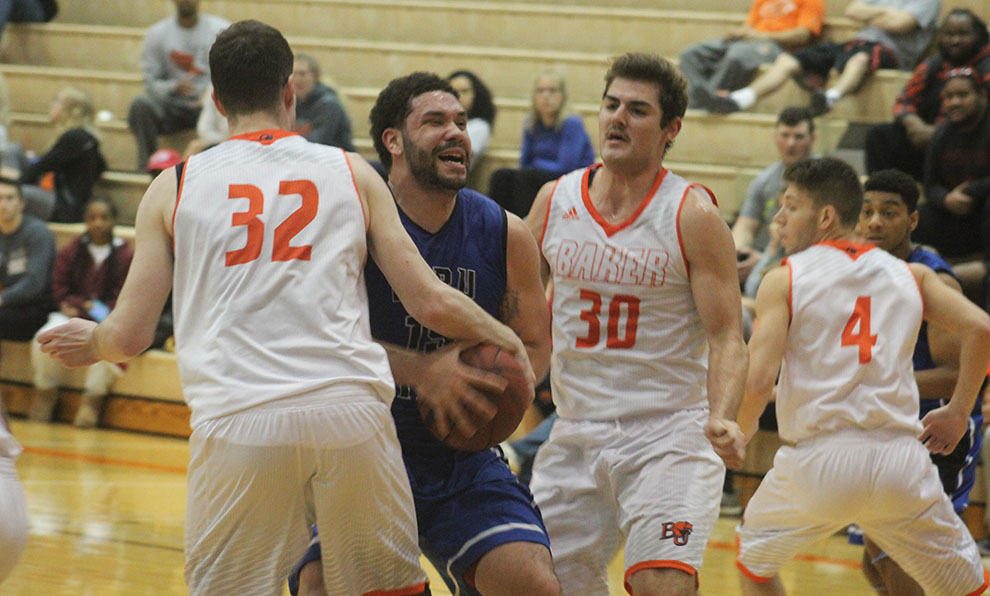 Baker's Dan Young and Brett Elifritz work to keep Peru State out of the lane on Feb. 28 in the opening round of the Heart of America Athletic Conference Tournament. The Wildcats won 95-77. Photo by Shelby Stephens.

The Baker men’s basketball team is moving on to the second round of the Heart of America Athletic Conference tournament after defeating Peru State College 95-77.

Tyrome Parker led the Wildcats with 27 points on a terrific scoring effort, going 9-9 from the field and hitting all three of his 3-pointers. He also added seven free throws to tie his season-high in points that came just 10 days prior against the Bobcats, a game the Wildcats lost 98-95 in overtime.

The Wildcats were able to avenge the loss by shooting 54 percent from behind the 3-point line as a team, greatly outpacing the Bobcats, who went just 8-27, a 30 percent clip. The Wildcat offense has been on a roll, as this is the fourth straight performance with 90 or more points, as well as the third consecutive game shooting 50 percent or better from the field.

The reserves for the Wildcats played a huge role in the victory, outscoring the Bobcats’ bench 41-11. Junior Tyree Peter and freshman Brett Elifritz each had double figures in the game, Peter with 13 and Elifritz with 11. Peter also led the Wildcats in rebounds with 11, his fourth double-double of the season.

They also more than doubled the Bobcats in second-chance points, 20-8, thanks to 13 offensive rebounds.

Baker carried a 44-40 lead into halftime with Parker’s 17 points leading the way, but the Bobcats continued to cut away at the lead in the early stages of the second half. The closest the Wildcats came to losing the lead was with 18:06 left, when the Bobcats came within two points.

Rashad Brackeen kept the Bobcats in the game with his 28 points. Brackeen and Parker virtually duplicated the scoring duel that took place in their Feb. 18 matchup, with Brackeen scoring 30 to Parker’s 27. The difference in this game came down to the lack of help for the Bobcats’ star player, as the rest of the team shot just 35 percent from the field.

From there, the Wildcats went on a quick 8-0 run to bring the lead to double-digits and, and Baker kept the Bobcats at bay for the rest of the game. The Baker lead stretched to as many as 20 points on three separate occasions, as the Wildcats outscored Peru State 51-37 in the half.

The Wildcats will go on to face top-seeded William Penn University at 7 p.m. Thursday in Oskaloosa, Iowa. The teams split the regular-season series, with Baker winning 88-85 on Nov. 19, and the Statesmen narrowly taking a 95-93 double-overtime victory on Jan. 28.