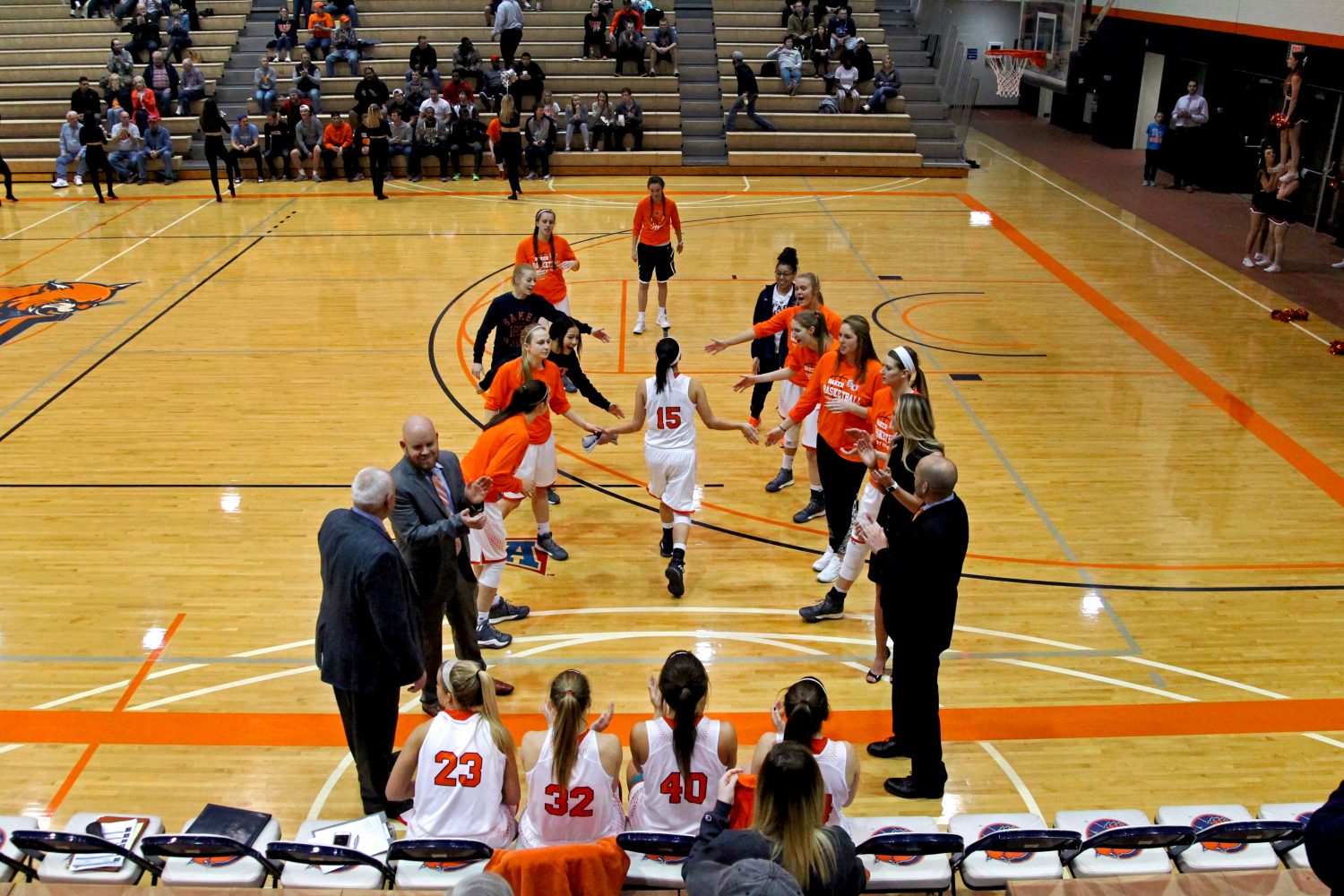 Jessica Zweifel and the rest of the Baker starters are recognized before Wednesday's Heart tournament quarterfinal game against Grand View. The Wildcats won 84-52 to advance to the semifinals. Photo by Chad Phillips.

Junior Sydnie Hanson thinks being able to play Grand View for a second time made the game easier to prepare for, but the team entered the game remembering to play each game like a new one.

“It was so fresh in our mind,” Hanson said. “Playing them again right after we played them Saturday, it was just really easy to remember what they were doing, but at the same time we just kind of treated it like a different game and that it wasn’t the team we played Saturday.”

The Wildcats remained in front of the Vikings for the entire game and with a spirited student section encouraging the coaches, late in the fourth quarter, freshman Julia Bannister checked into the game, hitting the final 3-pointer and sealing the Wildcats’ Heart quarterfinals victory.

The Wildcats began the game on a 7-0 run before the Vikings got on the board with 6:53 left in the first quarter. A 3-pointer from Heart Player of the Year Kelsey Larson sent Grand View into a timeout with 5:39 left to play in the first. Larson went 2-6 from the 3-point line and contributed 16 points to the ‘Cats victory.

The Wildcats finished the first quarter with a 17-4 lead. The Vikings cut Baker’s lead to nine early in the second quarter, but the Wildcats headed into halftime with a 32-20 lead.

The Wildcats were outscored in the third quarter 16-15, but the Vikings could not mount a big comeback as the only shot 37.3 percent from the field for the game. Grand View’s leading scorer was Maddie Westergard with 18 points.

In the fourth quarter, Hanson made back-to-back 3-pointers extending Baker’s lead to 63-43 with 6:44 left to play. Hanson then made two free throws later in the quarter to extend Baker’s lead even farther to 67-43 with 5:50 remaining.

Hanson’s scoring run came after spending some time on the bench due to a lack of confidence.

“My coach kind of chewed me out because I wasn’t confident and I was getting in my own head,” Hanson said. “He just kind of told me ‘I am confident in you and I believe in you and I have no doubt that you’re going to hit the shot,’ and I started getting confidence in myself and I just shot after that.”

Freshmen Julia Bannister ended the Wildcats scoring for the night with a 3-pointer. Bannister entered the game for the first time with 1:16 left on the clock after an eruption from the student section.

“We had a really good turnout tonight, and I think if we continue to have that turn out it really helps,” Hanson said. “I think that when the crowd gets all fired up, it gets us fired up and we love just having people to support us.”

Before Grand View’s final basket, Baker held its biggest lead of the game at 34 points.

The Wildcats will continue their Heart tournament run against Heart rival MidAmerican Nazarene University on Friday, March 3, at 7 p.m. inside the Collins Center.