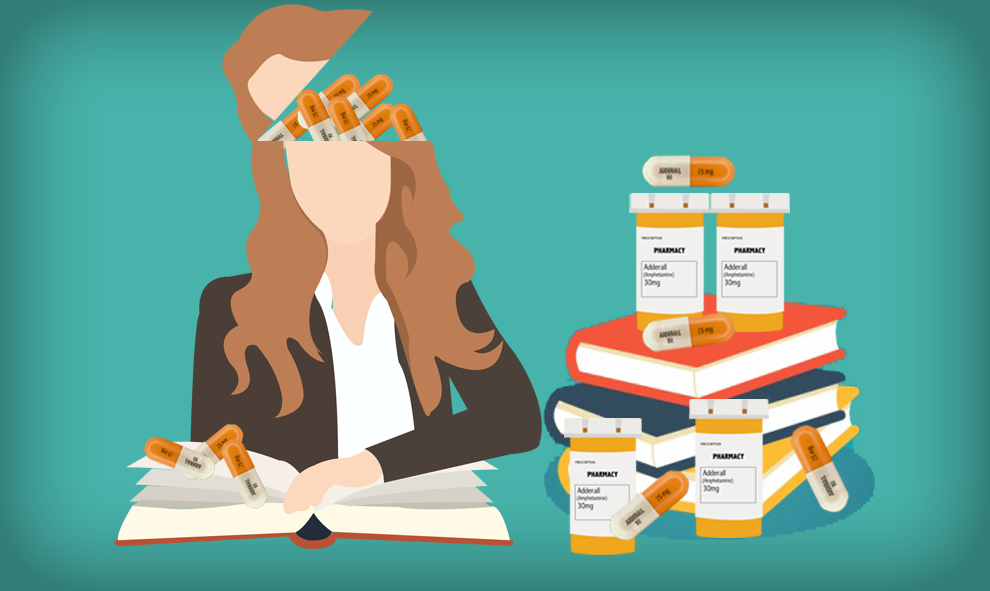 Madison Armoneit lay still on the bathroom floor of her lecture hall. Her body had begun to shut down from days without sleep or food, her heart rate was dangerously slow, and her blood count was severely depleted. She woke up to her sorority sisters standing above her in fear and disbelief, completely unaware of the substance abuse that had taken over her mind, body and health.

Armoneit, a former Baker student, left the university in 2016 during her sophomore year to be admitted into a high-level inpatient treatment facility for substance abuse and eating disorders. Adderall became her escape, her mechanism of control. Eventually, however, it took control over her, and her life spun into a battle of addiction as she was fighting for months to overcome a dependence on a drug she felt she could not function without.

“Adderall became THE thing for me when I thought I had lost everything,” Armoneit said. “My emotions were heightened.”

She felt unstoppable. She started using Adderall to balance her busy schedule. She could focus on school, soccer, friends and work without being influenced by outside distractions.

“That was the first time I thought that I really felt comfortable in my own skin,” Armoneit said. “It took me a really long time to develop a clear understanding of how deep I had fallen.”

Armoneit not only became heavily addicted to Adderall, but said it was the number-one cause for the eating disorder that ended up threatening her life.

“Food didn’t even cross my mind when I was abusing Adderall,” she said. “It was easy for me.”

She is now more than three months clean and hopes she is on the road to a full recovery. She said she still has a long way to go and a lot of learning to do.

Abuse, Misuse and Recreational Use

Across campuses throughout the nation, college students are popping Adderall like it’s chewing gum, often without considering the mental, legal or physical repercussions that have been associated with the misuse, abuse and recreational use of Attention Deficit Hyperactive Disorder (ADHD) medications. Adderall has been called a “study drug” by the National Center for Health Research, which says that the abuse rate for study drugs is somewhere between 7 and 33 percent among college students and is rapidly increasing.

Baker University is contributing to these statistics, as the use of Adderall has become more of a concern in recent years.

“It’s a much larger issue than what we adjudicate,” Dean of Students Cassy Bailey said. “We know the abuse is happening.”

Bailey said the school’s goal is not for the students selling or abusing the drug to be arrested or expelled. However, if university officials find a large amount of any controlled substance, those are immediately turned over to the police and can result in a student facing felony charges as well as revocation of federal student aid and expulsion from the university.

“We didn’t see this kind of Adderall abuse 20 years ago,” Bailey said. “We don’t know the longitudinal impact.”

According to the Addiction Center, “people regularly taking Adderall at unprescribed doses are at a high risk of becoming addicted.”

While students may begin taking Adderall pills only occasionally, for example, once or twice during a semester in the midst of finals week or before a large project is due, many find themselves increasing the dosage and frequency over time.

With addiction comes tolerance and withdrawal. Armoneit said with increased frequency of use, she began to develop a tolerance to Adderall and needed stronger dosages and increased milligrams to produce the same effects.

According to ADDitude Magazine, users metabolize medication differently. Therefore, a level of dosage may have completely different effects on two people, even if they are the same weight and height.

Baker University Nurse Practitioner Jody Mitchell compared taking unprescribed prescription pills to Russian roulette, a dangerous risk that students are taking every time they ingest a medication that isn’t medically approved for them.

“You don’t know how that drug is going to affect you,” Mitchell said.

She also had a warning for students who are taking Adderall on a prescription. She said you can’t tell how Adderall will interact with other medications you are taking.

According to Live Science, “prolonged use can cause developmental problems in the brain, negative changes in brain activity and severe withdrawal problems such as depression, psychosis, restlessness and agitation.”

Armoneit’s story shows the damage Adderall abuse can have on one’s body. In fact, she is still suffering the physical consequences that came with the abuse. She said it has taken a while to regain her energy level.

“Something I don’t think people really believe or think about when it comes to substances that have become so cultured, is that there are major health consequences, even to someone prescribed,” Armoneit said.

Education is key for proper Adderall use. Mitchell said students need to communicate with their primary care physician and discuss the possible side effects before deciding to take Adderall or any ADHD medication.

Adderall is not only extremely dangerous, but it puts students at a disadvantage when they graduate. Bailey said students aren’t always going to be able to deal with life by popping a pill and staying up all night.

“You’re learning no skill set,” Bailey said. “Taking a test is so much beyond the content. It’s about the preparation, organization of your time.”

By taking the “easy way out,” Bailey said students are cheating themselves; they are developing no coping skills. She said they are setting themselves up for failure in the future.

The use of study drugs also detracts from those who have legitimate prescriptions and need Adderall to perform in school or function normally.

“Taking Adderall unprescribed is a lazy way of learning,” Bailey said. “You don’t need it.”

Sophomore Hunter Collins was prescribed Adderall this year after struggling with focusing and productivity. He said the medication has enabled him to regain the ability to feel in control of his school work and his life, and he is no longer consumed by distractions and stressors.

He said his grades truly depend on this medication, and it isn’t fair that those people who don’t need it are using it to get an advantage, while others are studying rather than using drugs to get ahead.

For BU students, Adderall may seem like a quick fix for the stress that comes with attending a private university with a tough curriculum. However, it can have adverse and life-altering effects.

Adderall controlled Armoneit’s life as she became dependent, unable to function normally without it. She hopes others can see hope for the future.

”I think it’s so important to advocate and express not only the harsh realities but also the incredible recoveries,” she said.