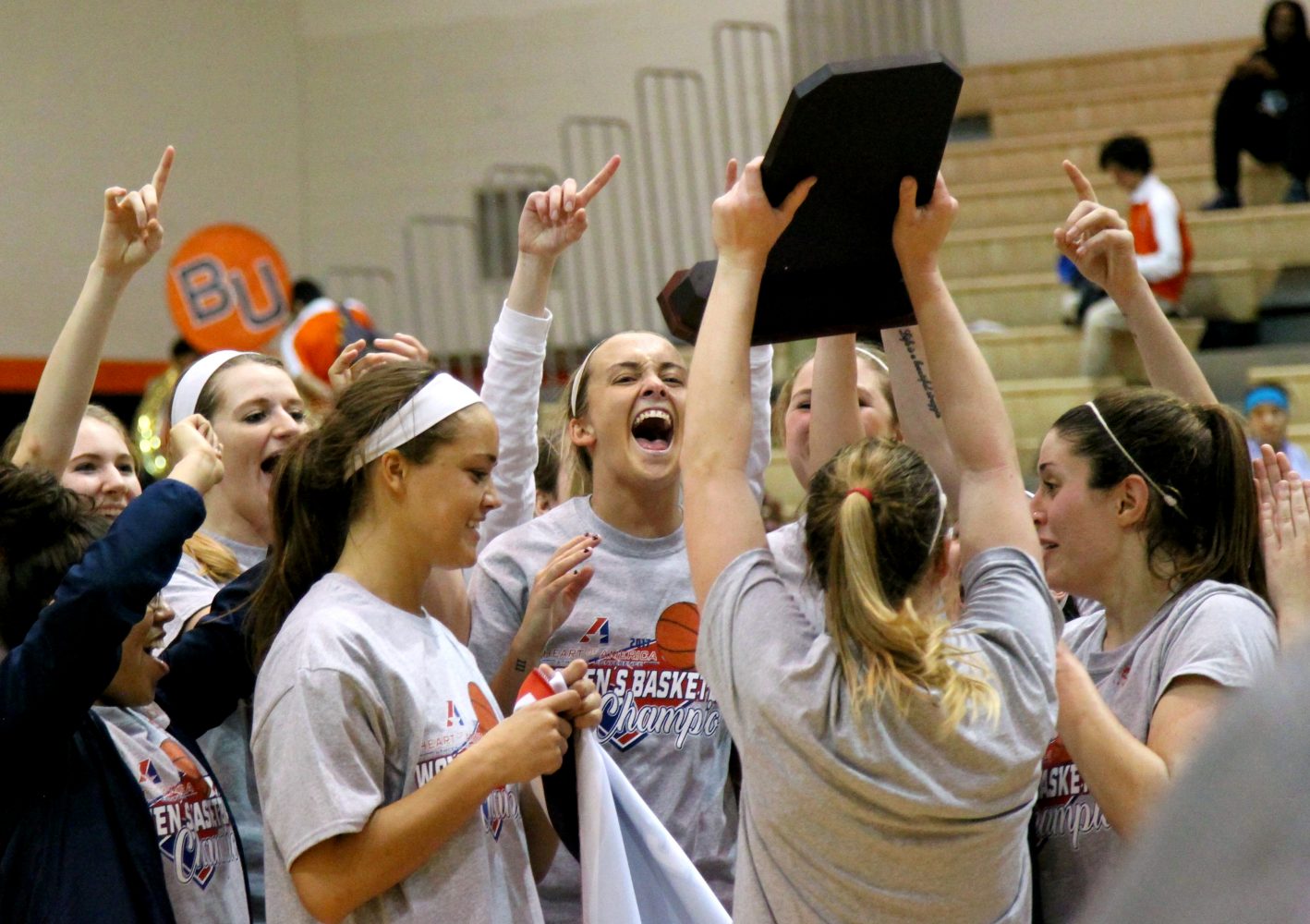 The women's basketball team celebrates winning the Heart of America Athletic Conference Tournament for the first time in program history. The team added this achievement to the list for another history-making season. Photo by Chad Phillips.

The women’s basketball team ended another history-making season after falling in the Round of 16 in the NAIA National Championships. The Wildcats recorded 30 wins on the season, won the Heart of America Athletic Conference outright and claimed the Heart tournament title for the first time in program history.

The Wildcats finished the 2015-16 season with 28 wins to set a school record, which they broke again this season with 30 wins.

Baker finished the 2016-17 season 30-5 overall and 24-2 in conference play. The Wildcats dominated the Heart all season and earned high honors within the conference. Ben Lister was named Heart Coach of the Year for the third time, and senior Kelsey Larson was named the Heart Player of the Year. After the national tournament, Larson earned a spot as an NAIA Second Team All-American. This is the fifth-consecutive year a Baker player has been named an All-American.

Three players also earned honors for their academic performances. Buchel, Sydnie Hanson and Caitlin Modesett were all named Daktronics-NAIA Scholar-Athletes. To be nominated for this honor, athletes must be at least a junior and have at least a 3.5 GPA.

Three seniors led the way for the Wildcats all season. Larson, Buchel and Cook each played their last game in a Baker uniform. In the past four years, the Wildcats have gone 106-31.

Larson ended her career with 925 points, putting her at No. 13 in all-time scoring for Baker. Buchel, who played for just three years, totaled 579 points and 119 blocks, and Cook totaled 600 points and 357 rebounds.

As a team, Baker led the nation in total blocks with 168 this season. The ‘Cats also held several other top rankings, including being third in total 3-pointers made with 300.

This historic season marked the fourth-consecutive appearance for the Wildcats in the NAIA National Championships. The run to the finals in 2016 was the furthest Baker has ever made it in the tournament, as the Wildcats lost 49-35 to MidAmerica Nazarene University in the championship game.