Reality Check: Are textbook prices really on the rise? 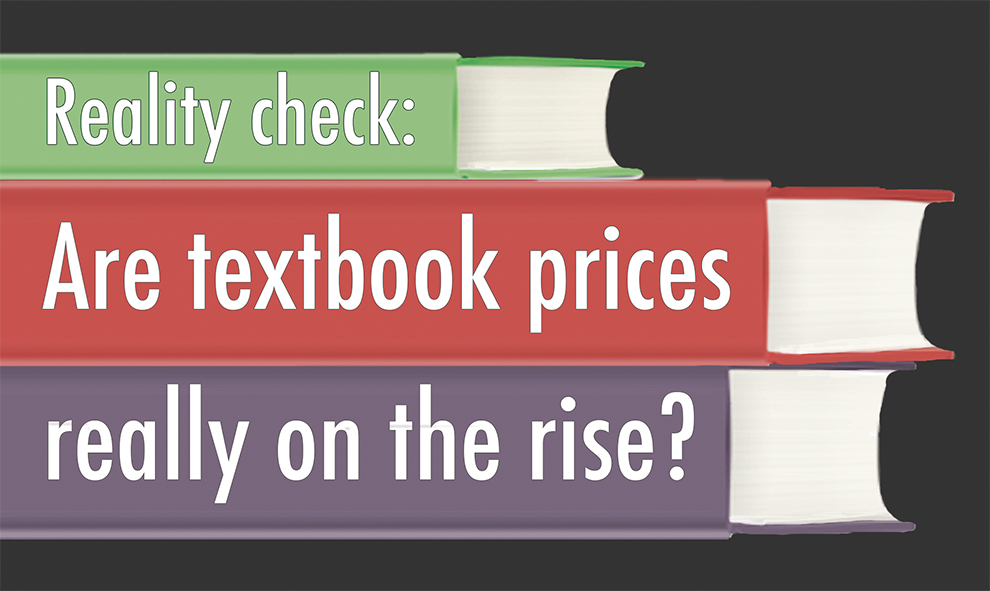 The world looks very different in 2017 than it did in 1977. For instance, in 1977, Apple Inc. was just taking off, Tom Brady was born and the average annual cost of college tuition was $4,080. Now, 40 years later, Apple Inc. is one of the largest technology companies in the world, Tom Brady has five Super Bowl rings and the cost of going to college is higher than ever.

College students frequently complain about the cost of textbooks. Are these complaints well founded? According to data from the Bureau of Labor Statistics (BLS), textbook prices have increased more than 1,000 percent from 1977 to 2015, which is more than three times the rate of inflation. In the 2015-16 school term, students spent an average of $1,310 on textbooks and supplies alone, according to a College Board annual survey of colleges. Based on the 1,000 percent statistic, a textbook that cost $25 in 1977, would cost approximately $250 today, wholesale.

Why are they so pricey?

The high numbers appear to be attributed to several causes. First, the earlier BLS statistics likely were focused on the wholesale price of textbooks, brand new from the publishers, instead of including an average of prices among both whole and resale (buying used or renting) market values. The resale market was smaller in 1977. Students would have to visit a physical store to buy used or rental books because the internet was not an option.

Third, the journey of publishing a textbook, from start to finish, is long and difficult.

Baker University Professor of Business and Economics Alan Grant authored his own textbook, Economic Analysis of Social Issues, published in 2015 by Pearson Education. He recounts the process for getting his book published as long and painful.

“After four years of basically working full-time with someone from Pearson and all of the other people who are involved in the process, you end up doing about six or seven drafts with a lot of eyes on them,” Grant said.

The process begins by the author writing a few sample chapters and a prospectus explaining the need for that particular textbook. If the author gets a contract with a publisher, then there are a lot of drafts and editing followed by final publication.

“There is just a lot of money that gets pumped into one of these before it ever hits the market,” he said. “My guess is that $500,000-to-$750,000 went into getting this thing ready before it showed up. So they want to recoup some of that.”

The fourth cause of growing whole-price textbooks occurs when students choose to buy used or rent textbooks from secondary markets, like Amazon and Chegg, in the search for cheaper alternatives. This practice causes textbook publishers to miss out on profit and compensation for the textbook, leading them to hike up their wholesale prices.

“The textbook market is very different than it was when I was in college,” Grant said. “It is very different than it was four years ago in that Amazon is now doing rentals, Chegg is doing rentals, and plus we have a much more fluid secondary market. Bookstores aren’t getting stuck with old copies. Their students are selling them to people all the way across the country. That secondary market works much better, which means fewer primary sales for Pearson, so they want to get some of that money back on a smaller amount of copies – making them super-expensive.”

Sophomore Caitlin Hardgrove chose to major in biology, originally intending to become a heart surgeon, but she rediscovered her love for animals and pursued her dream to become a veterinarian. Hardgrove is taking 18 credit hours this semester, plays on the softball team and is vice president of Zeta Tau Alpha sorority, so finding time to make an extra $800 for a semester of books is time-consuming.

“On a normal day, softball takes up about three hours, and on game days it’s at least five,” Hardgrove said.

Similarly, senior Jamie Steury, who takes 17 credit hours, is a member of Delta Tau Delta fraternity, participates in track and field, is a member of Omicron Delta Epsilon (economic honor society) and is pursuing a career in accounting.

“I wait until after the first or second day of classes,” Steury said. “I do this to see if I need to order the book or not and also to see if anyone in the class is interested in sharing a book or even splitting the costs.”

Some students end up with extra cash from scholarships to use on textbooks, but most students end up paying out of pocket. Not to mention, some professors may not stress the importance of reading required textbooks. Hardgrove and Steury each estimated that they have lost $500 on textbook purchases due to lack of use.

We sent out a survey to the Baker University student body and asked them about their majors, how many books they needed this semester, whether they buy their books online or in the campus bookstore and what website they frequent most.

The top two majors reported were those falling under the category of math and science and those related to business.

“For most people coming here, it’s pretty expensive already, and they have to take out student loans, so adding a couple hundred dollars on top of that is a pretty big deal,” Hardgrove said.

Professor of Philosophy Don Hatcher, who has written two textbooks of his own, recognizes the divide in prices between different areas of study.

“In philosophy, a lot of the stuff that I teach is historical – those being classics like Aristotle, Plato, Aquinas, Kant, Marx – and they are all online. ‘Just follow the link and print it off yourself,’” Hatcher said. “I try to keep book costs to a minimum. I would assume the books in the humanities – even in the anthologies – that they are pretty reasonably priced, just because this stuff has been out there for decades and is in the public domain.”

How to move forward?

With students turning toward resale options more often, publishers sell fewer total books. The textbook industry, like many others, must adapt to the new digital age to succeed.

“I do think the concern over the rising price of textbooks is an unwarranted concern from the students’ perspective,” Grant said. “The cost of getting a semester’s worth of books actually hasn’t gone up. It is actually probably much cheaper today than it was 20 years ago because you have access to these temporary rental markets that just didn’t exist before. I think the real concern for the textbook industry is if the resale industry is so active, how are we going to cope with that and keep producing new books that provide more to students? And I do not know the answer to that. I think the textbook industry is trying to figure that out.”

In order to decrease the resale markets and steer customers back to the source, publishers have started utilizing the digital components and forms of some textbooks as a way to keep revenue flowing. Some textbooks now have access codes to digital content that students can either buy separately if they bought a used copy or receive it free when they buy the textbook new from the publisher.

“They want to steer people toward the content that is not re-sellable, mainly electronic content,” Grant said.

Grant said that publishers include online components at a lower price that could drive customers to the electronic market and away from the resale market.

Some students can make the cost less detrimental to their bank accounts by using the option to write off textbook expenses on their tax forms (IRS form 8863).

Whether driven up by the new competitive markets or down by today’s ease of access to rental or electronic sources, the price of college textbooks is forefront on the minds of students, professors and publishing companies.