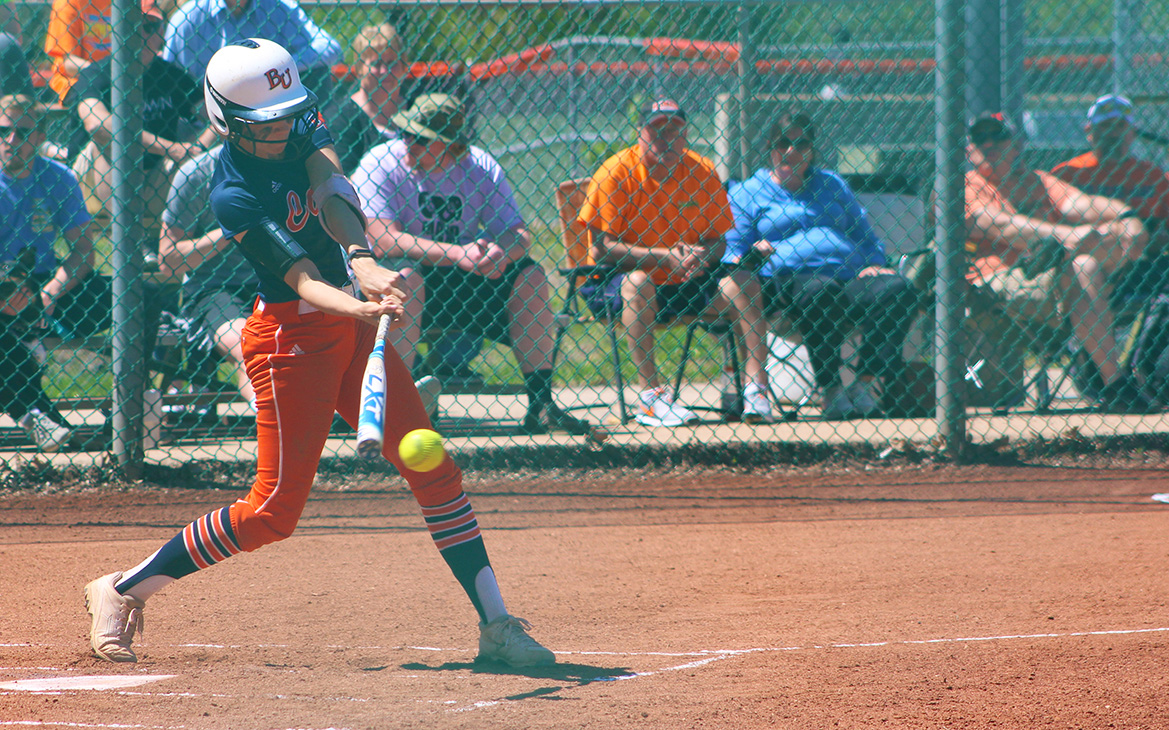 Sophomore Caitlin Hardgrove makes contact with a pitch during her time at bat. Image by Justin Toumberlin.

The Baker softball team has fallen below .500 after being swept by Central Methodist University in a Tuesday doubleheader. The Wildcats now sit at 23-24 with four games left in the regular season.

The Wildcats also suffered three losses in four games at home over the weekend, including a sweep at the hands of Benedictine College.

In game one of Saturday’s doubleheader against Missouri Valley College, Stephanie Cardona and Riley Swickard each had two RBIs, all coming in a five-run fourth inning for the Wildcats that opened up a 6-0 Baker lead. Caitlin Hardgrove had previously driven in Cardona in the third inning that opened up the scoring for the Wildcats, and the 6-0 score remained through the rest of the game. The defense for the Wildcats went errorless, and Olivia Brees allowed just three hits in a complete game shutout.

After shutting the Vikings out in game one, the Wildcats were shut out themselves in game two, 4-0, leaving nine runners on base. Teagan Louthan allowed three runs, two of them earned, in 5.2 innings, but she received no run support from the Wildcats’ offense.

The Wildcats held an early 2-0 lead against Benedictine College in game one of Sunday’s senior day doubleheader before the Raven rattled off three unanswered runs late in the game. They cut into the lead first in the sixth inning and took the lead in the seventh, when Benedictine’s Carney Meade hit a two-run homer off of Brees. The Wildcats were unable to answer in the bottom of the inning, losing 3-2.

The Wildcats were victims to a Benedictine offensive explosion in game two, losing 8-2. The Wildcats gave up 13 hits and committed three errors on defense.

Game one against CMU was close thanks to Brees’ stellar pitching. After trading runs in the third inning, the game remained 1-1 until the bottom of the sixth, when CMU’s Skyler Hime singled in a run. With just one chance to answer back, Hannah Flynn reached third with just one out but was unable to advance home.

Madison Allen drove in all three runs for the Wildcats and provided two of their eight hits for the game. The Eagles were able to rack up 10 hits of their own, however, and score seven runs en route to a 7-3 victory.

At 16-18 in the Heart of America Athletic Conference, the Wildcats are currently in eighth place in the conference standings. They are just one game back of seventh, and 2.5 games out of sixth, but have two top-six opponents left to face. Their two doubleheaders will be on Friday at third-place Evangel University, and on Saturday at sixth-place MidAmerica Nazarene University.