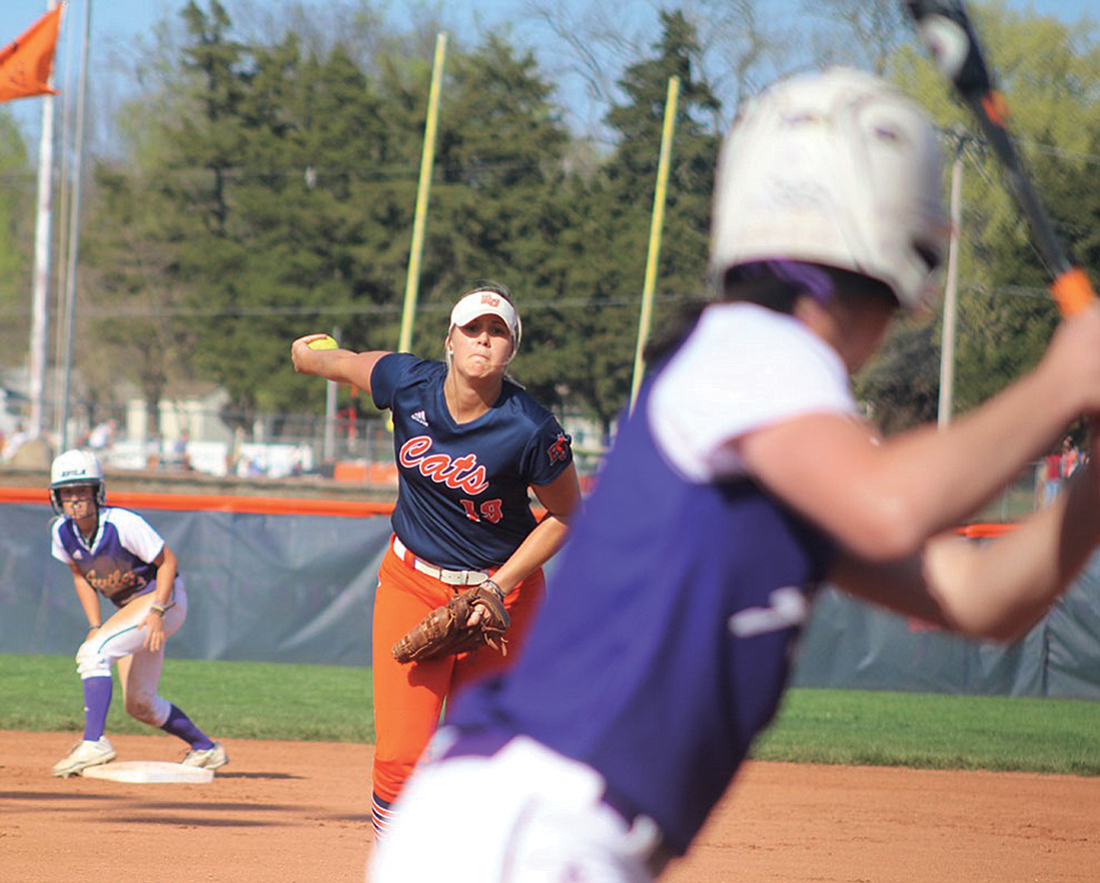 On Saturday, April 22, the Baker University softball team might have split with Missouri Valley, but the real story was what occurred on the mound in game one against the Vikings.

Sophomore pitcher Olivia Brees threw nine strikeouts in that game, bringing her season total up to 239 strikeouts. Brees broke Erin Greenwood’s school record of 226 strikeouts in a single season, a record that was set back in 2012.

The Wildcats still had three doubleheaders left in the season before the Heart of America Athletic Conference Tournament, meaning 239 wasn’t Brees’ finished total for the season.

Olivia Brees holds the school record for strikeouts in a season with 272 before the Heart Tournament. The record was originally held by Erin Greenwood.

Brees now sits at the top of the pitcher standings in the Heart with 272 strikeouts after those three doubleheaders, beating second place Claudia Farrell from Grand View by more than 50 strikeouts.

Brees said she never really strived for the strikeout record while playing but instead focused on “doing her job.”

With two years of eligibility left, Brees is focusing on the opportunities that can come in the future.

“It’s kind of exciting,” Brees said. “It means I still have room for improvement. I’m excited for the next two years in the hopes that I can become even better.”

Brees believes that the confidence that comes with the strikeouts will help her in future games. However, she also knows she isn’t alone on the field.

“I know as well that I have a defense behind me that is able and capable of getting outs,” Brees said. “So, it’s not something I put that much pressure on myself to get many strikeouts. It’s just something I’m good at, I guess.”

Brees believes a softball team needs a strong relationship between the pitcher and catcher to be successful.

“We’re involved in every single play, so I think it’s good to have communication and a strong relationship between a pitcher and a catcher,” Brees said.

The player behind the plate catching those strikeouts is junior Savannah Bellem. Bellem is ranked No. 10 in NAIA Division I softball for putouts per game. Her putouts have increased dramatically from 123 in the 2016 season to 291 this season.

“She wants every pitch to be her best, and I think that’s something that definitely shows in games,” Bellem said.

Brees has played in 32 games this season and has seen 645 at-bats.

“During games, it’s kind of hard, just because you’re going in and out of the dugout,” Brees said. “There’s not much time to rest.”

As for the time spent between games during the season, Brees relies heavily on ice and rest. In order to keep her arm loose, light pitching workouts help Brees the best.

Brees’ determination and passion for the game is evident to her teammates.

“She’s one of the only people I’ve seen where if she gets mad, she throws harder and more accurate,” Bellem said. “But at the same time, you don’t want to make her mad.”