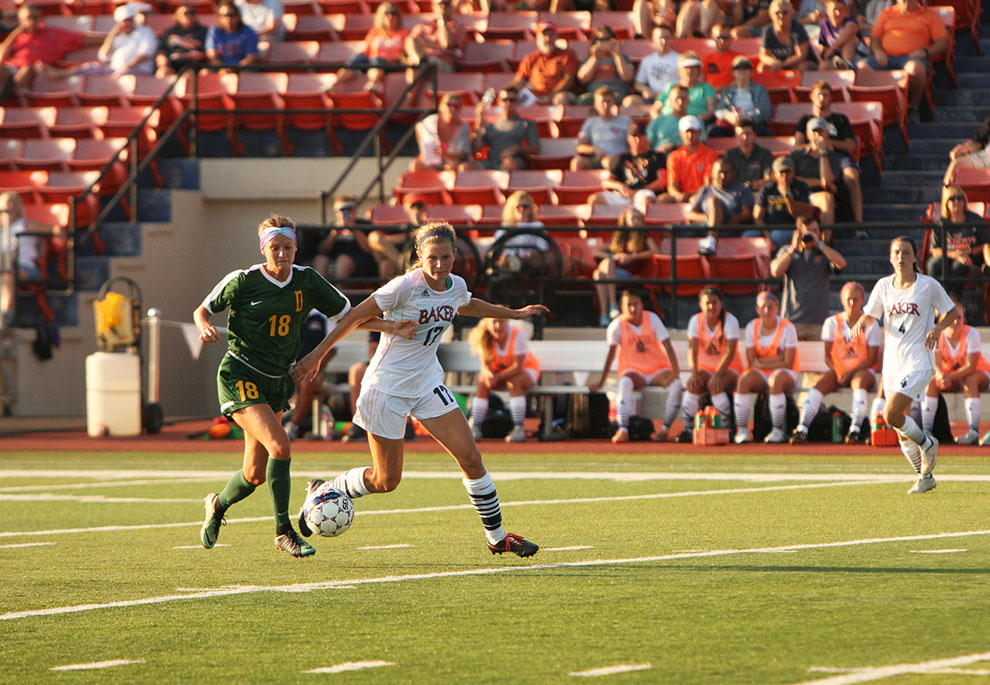 Junior midfielder Allyson Hertig fights for the ball against University of Science and Arts Aug. 26. The Wildcats lost the season opener 1-2.

The Baker women’s soccer team began its season Saturday against the University of Science & Arts of Oklahoma with not only new players on the bench, but also a new head coach.

New women’s head soccer coach Mark Sheldon opened up his college coaching career with a loss in overtime to USAO at Liston Stadium. Senior Megan Johnson has been with the soccer team for all four years of her college career and sees a noticeable difference in coaching style even through sound.

“Anyone that has been to a game in the past knows that Davy is one to constantly have a voice on the bench throughout the game which may be one of the more obvious differences between them,” Johnson said.

While the loss can be disappointing to the team, valuable playing time was experienced for three different freshman soccer players. Freshmen Kamryn Crittenden, Carlee Doss and Victoria Aceves-Power all subbed on during the game against USAO for their first college match.

Johnson says the first year on the team is always about learning, applying what you’ve learned and thinks the new additions to the team are off to a great start.

“I see our new players getting many opportunities to contribute on the field in a positive way,” Johnson said.

The first half proved to be a defensive battle for both teams with the match remaining scoreless through halftime. USAO goalkeeper, Brandi Hutchison, was a match for Baker’s offense recording three saves in the first half.

In the 64th minute Baker broke through Hutchison’s defense with a goal by Johnson. It wasn’t long until USAO fired back with a goal in the 78th minute by Jordan Cleveland tying the game at 1-1.

Both teams looked to take the lead while time ticked down. USAO recorded eight shots in the second half, while Baker recorded five shots.

At the end of regular time, it was decided the game would go into golden goal. Baker goalkeeper Rachel Hunt was put to the test recording 2 saves in overtime, but a Baker foul inside the box gave USAO a penalty kick that Hunt couldn’t save. In the 99th minute, Christina Ramos found the back of the net for USAO ending the game and handing Baker its first loss of the season.

Familiar faces led the Wildcats in Shots on Goal with both senior Kady Dieringer and junior Maria Flores Tome having two each. Followed by junior Megan Johnson, sophomore Amelia Hoelting and sophomore Jenna Lattimer with one each.

While this was Sheldon’s first game as a university soccer coach, Sheldon has had plenty of experience on the pitch.

“We all loved Davy, but [we] are excited for the amount of experience coach Sheldon brings to Baker,” Johnson said.

Sheldon and the women’s soccer team looked to improve on the season when they traveled to Ottawa to face the Braves on Aug. 29. After a hard fought match that went into double overtime the Wildcats walked away with a 1-1 tie.

Johnson added a second goal to her season total, netting Baker’s only goal of the match tying the game late with three minutes left to play in regular time. After two overtimes the score remained 1-1 signaling the end of competition.

The Wildcats will continue the search for their first win of the season when they travel to Kentucky to face Lindsey Wilson on Sept. 5.