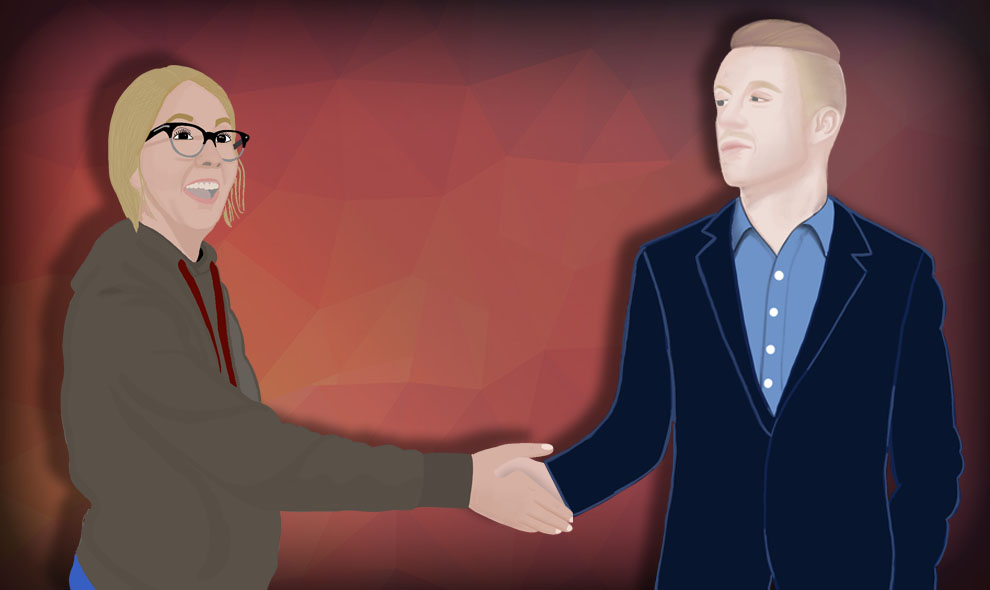 I have been nothing short of obsessed with Ben Haggerty, aka Macklemore, since I was a braces-clad seventh grader at Centennial Middle School. This summer while working at Microsoft Production Studios, he was on a shoot I was working on and I finagled my way into his green room.

Now I know that “finagled” doesn’t sound too professional, but this was a total YOLO moment that all started out as a joke.

Once I heard Haggerty would be visiting Studios, I set out to create the perfect snack basket for him, one of my jobs as an intern.

I heard through the grapevine that he was a fan of lemon-flavored Luna bars, so my fellow interns and I scoured the building for the snack.

My big plan was to go and replenish the snack basket already in the green room this special guest would be in. While this all started as a joke, after Haggerty was escorted into his dressing room I decided to go for it.

I knocked on the door and then proceeded to carefully crack it open. While walking over to him, I was almost blinded by brilliance. I swear there was a glowing white aura surrounding his body.

While I was having a royal freak-out on the inside, I maintained a professional tone and candor. I gave him the snack and drink spiel not thinking to gain a conversation, but then he asked me THE QUESTION.

No, unfortunately he did not ask for my hand in marriage, instead he pointed to the snack basket and said, “Did you open the Big Red gum?”

I told him it couldn’t have been me, “I don’t like Big Red gum.”

He said, “Lily, (after seeing my name on my badge) I think you should give it another shot.”

Not wanting to upset my hero, I accepted the piece he handed me. We both chewed the gum, along with his friend, also named Ben. As we chewed, we all critiqued the flavor, texture and the various other factors that make a great piece of gum.

Unfortunately, it was time for me to leave, but before heading out I introduced myself.

I then left the room and proceeded to collapse in the hallway and become a human puddle.

This was just one of the many incredible experiences I had while I was a part of the summer support staff at Microsoft Production Studios in Redmond, Washington.

I gained a remarkable amount of knowledge and real-world practice over the short six-week stint when I was on staff. From lighting to staging, writing to filming, the level of familiarity I attained with the world of production could not be matched by any class.

My involvement in the Microsoft Production Studios summer support staff program has rerouted my professional path and has shown me a new way to look at my public relations major.

If you are thinking about taking a job slightly outside of your comfort zone, or not directly in your career path, but you seem to be drawn to it, go for it! Don’t be afraid to try something new because it might alter your academic path. It could be one of the best choices you ever make.